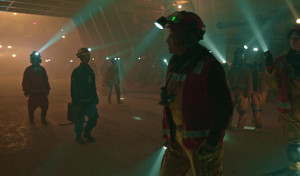 Story: For ten years now, a tunnel for a high-speed train is being built, and the last part of the route runs through a mountain in the southwest of China. Due to shifts of the Indo-Australian Plate, however, there have recently been repeated changes in the geological conditions. For that reason, specialist Hong Yizhou (Zhu Yilong) has his hands full, and along with his girlfriend Lu Xiaojin (Jiao Junfeng), who is responsible for radar measurements, he just about manages to prevent a catastrophe. And when Hong then checks some measuring instruments attached to the mountain, the structure of the mountain suddenly starts to shift. He falls and gets trapped in a cave with the entrance buried behind him. In the meantime, Lu is in the nearby city to pick up Hong's father Yunbing (Huang Zhizhong). Due to the mountain shifting, the ground suddenly opens up and swallows a bus. Since Hong Yunbing used to build railroad lines in the army and had carried out some rescue missions in that time too, he coordinates the initial rescue operation, but then slipping rocks eventually trap him in a cave together with the bus, Lu Xiaojin, and some bus passengers. They set out to find a way out, while Hong Yizhou also tries to get to the surface. At the same time, specialists examine the situation and realize that there will soon be a huge landslide that will destroy the entire tunnel project. The only solution seems to be controlled blasting of a part of the mountain... 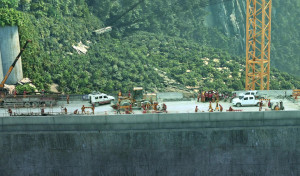 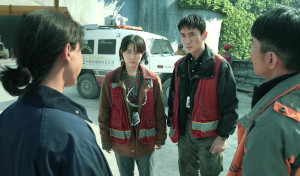 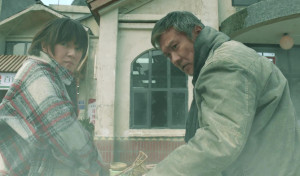 Review: With the ever-increasing budget available to Chinese productions, the number of disaster movies the country can put on screen is of course growing too. This time we get tectonic plates, an instable mountain, and huge landslides. So, the hero of the story has to blow up a mountain in a controlled manner. That sounds like an action-packed spectacle - and it is. Because if there is one thing you can't say about "Cloudy Mountain", it's that it would be too slow-paced. Apart from that, though, there's not much more to say about the movie that has not already been said about many other similar genre works. The story follows the standard genre rules including some drama to make sure the flick scores some points on an interpersonal level too. But unfortunately, that does not work, as the characters are not fleshed out enough and the cast lacks well-known or charismatic stars. 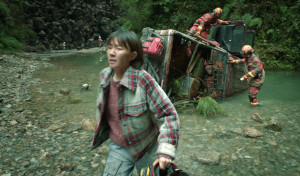 Director Li Jun has already managed to put together an average, but at least entertaining action thriller with the Chinese-Korean co-production "Tik Tok". This time, however, the scale is even more epic. "Cloudy Mountain" does not skimp on gripping moments and so even the introduction has a small catastrophe in store, in which our two heroes have to save the day. Over time, though, Jiao Junyan fades into the background, but at least she plays a more important role than just the hero's girlfriend. The protagonist, portrayed by Zhu Yilong, then gets another helper at his side: his father, played by Huang Zhizhong ("Line Walker 2"). This is supposed to create a special dynamic, as there has been a divide between the two when the mother died, which has to be bridged now. At least if they want to prevent a catastrophe from happening that could destroy an entire city. A good idea, albeit genre standard. But sadly, it was realized awkwardly. 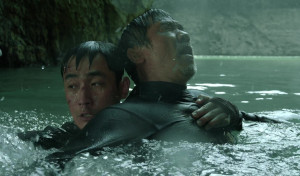 The problem are the performances which - while they are decent all throughout and by no means have B-movie quality - are just not convincing in dramatic moments. But this is also the script's fault as it contains some scenes that can only be described as involuntarily funny. Needless to say, that now and then someone has to sacrifice himself in a movie like this, but if you just cannot shed a single tear, and instead have to laugh, that's definitely not a sign of quality. This is also due to the fact that story-wise, the movie's developments in the first half are still relatively convincing, but in the second half, plans constantly get changed and the catastrophe is just taken to extremes. Among other things, a sudden storm announces itself, or the route to which the explosives have to be brought can only be reached via a large cliff that has to be climbed. Without security equipment, of course. 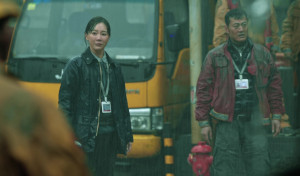 It is surprising how much free climbing there is in the movie. Then again, maybe it shouldn't be that surprising as the title already makes it clear we are dealing with a mountain. But watching the father climb on a cave ceiling (!) with minimal securing is probably something you wouldn't necessarily expect. But the climbing sequences are in fact the most gripping moments in the movie, as we actually get some thrill without a pathos-driven soundtrack trying to make it clear to us that we are supposed to be glued to the screen in suspense, as it does in other sequences. In addition, the second half of the flick is less fun to watch just because there is so much heroism. And when the announcement during the evacuation says that you have to trust the party and the government, that's the icing on the cake. In the light of the relentless adherence to rigid corona rules in the country, maybe it's important to stress this out from time to time? Be that as it may, it's just a pity that you still hear slogans like that in Chinese productions. 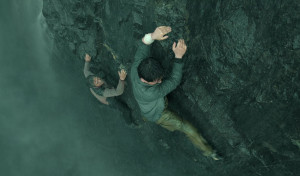 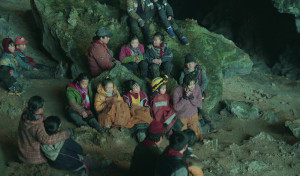 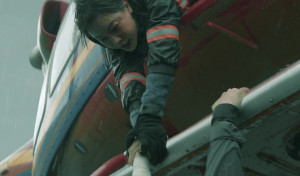 But that's not all, as the father used to be a "Rail Soldier", one of those men who expanded and repaired the rail network under dangerous conditions during the Second World War. At the end, it turns out that the movie also wants to be a tribute to the railway construction heroes. For a mindless disaster movie which is just supposed to be fun, this seems quite inappropriate. But at least, as mentioned before, the pace is always right. And generally, the special effects are convincing enough not to disturb the course of events. The soundtrack, however, has too much heroic drama in it, and the general pathos gets annoying at some point. Even though the movie is well-produced and objectively seen is therefore better than some other movies of its kind, flicks like "Skyfire" are still more fun to watch, because they give you the full B-Movie experience. In the end, "Cloudy Mountain" is just a disaster movie that takes itself too seriously and therefore gets involuntarily funny. Thus, it is not really worth watching.