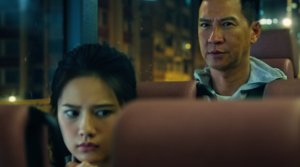 Story: Inspector Ching To (Nick Cheung) manages to save the hacker Yiu Ho-yee (Jiang Peiyao) from a contract killer just in the nick of time. Yiu is now in custody and refuses to talk to the police. During one of her hacker attacks she found out that an internationally active terror group kidnaps children, trains them to be perfect soldiers and then infiltrates the police force with them. That's why the hacker doesn't trust neither Ching To nor his superior Yip Kwok-fan (Francis Ng) or Officer Cheung Chun-yin (Louis Koo) from the "Security Wing", who now takes over the case. In fact, Ching and Cheung were separated from each other when they were kids. One of the boys saved the other one from the kidnappers, but then was taken himself while the other one managed to escape. But which one of the two is the mole in the police? At the moment, getting the information about the terror organization from the hacker is more important, though. After a while she confesses that the data needed is on a hard drive at her friend's place in Myanmar. The police decide to send Ching and Cheung under the supervision of Yip, but during the mission there is an explosion and afterwards the policemen get into a heavy gunfight on the streets of Myanmar. The terrorists seem to have almost unfailing resources and with a traitor in their own circle, the police have almost no chance of winning... 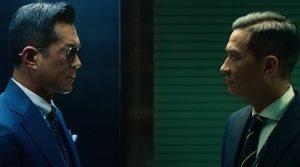 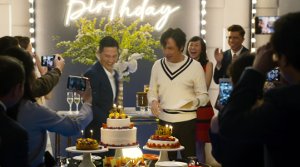 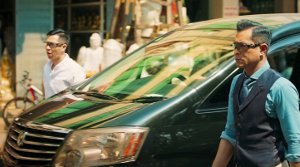 Review: Hong Kong cinema is more or less dead. At least, that's what it seems when you randomly choose a flick from the former British crown colony of the last couple of years. Great action scenes with brilliantly captured gunfights are rare and instead you mostly get badly animated computer explosions or car chases. Of course, HK flicks from the 80s and 90s also didn't really have a plot to take serious and a lot of things were portrayed in an over-the-top way, so that they often ended up being pretty ridiculous. But in an entertaining way. "Line Walker 2" is exactly that, just in a modern guise. Obviously, film as a medium has changed a lot during the last 30-40 years, so you should be allowed to expect a little bit more, both visually and storywise. And in fact, with the international sets, director Jazz Boon actually manages to give the movie something epic. 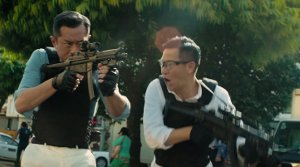 The movie stands completely on its own two feet and tells a new story. "Line Walker" was based on a TVB series and Louis Koo and Nick Cheung were cast as the main characters. And they are once more part of the movie (as well as the director), but in different roles. In the first movie the hardcore action was pretty surprising and fascinatingly gripping. Among other things, this was due to the choreography by Chin Kar Lok, who is also back and responsible for the movie's highlights: large-scale gunfights and car chases. However, director Jazz Boon tries to put a little bit of focus on the characters here and there as well. While this is not enough to turn the action flick into a drama, we still do care about the various individuals and on an emotional level we even realize in what horrible of a situation the double agent finds himself in. 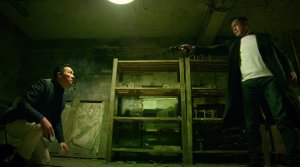 With the police's spy Jazz Boon undoubtedly takes his cue from "Infernal Affairs". However, the back story of the two befriended children also adds a little extra to the mix. For instance, guilt plays a huge role. Because, naturally, the other kid could have easily been conditioned into a killer by the gangsters as well. Therefore, there is room for complex feelings, but of course they are not explored in detail. That's a pity, as "Line Walker 2" could definitely have affected us more. We don't want to see either of the two protagonists die, but beyond that we remain rather distant from their emotional lives. Even though this is clearly a weakness of the movie, you have to stress the fact that Jazz Boon never leaves a doubt about what his movie's priorities are: action and entertainment. That way, you can see the little emotional moments, which thankfully never get cheesy, as a little bonus. 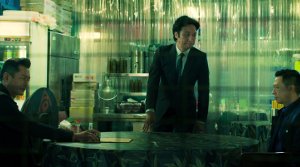 If you recall the movie's action scenes, the first thing that comes to mind is the gunfight on the streets of Myanmar. Suddenly, masked figures with machine guns appear from everywhere and target the two heroes. The dynamic as well as the more static shots in combination with a focus on sound effects is clearly reminiscent of Michael Mann's "Heat". Another surprising aspect about this scene is the epic scope of the shootout, because the killers just keep coming. It is obvious to us that the movie cannot top this. Still, during the showdown, the director tries to do so with a scene in Spain which was produced on an equally large scale. Coincidentally, there is even a bull run at the time our heroes are there and so we get a car chase including raging bulls. And the special effects are not that bad, only when we see the bulls up close, they come across as rather unrealistic. 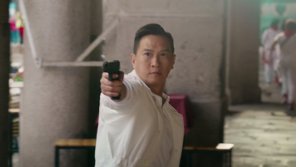 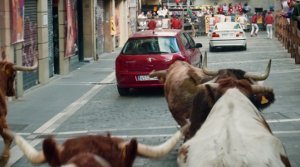 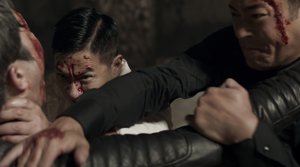 Nevertheless, there are also some annoying aspects. For instance, at a certain point of the story there are one too many flashbacks. In addition, the finale is also a little too over-the-top, but it is also a lot of fun if you don't take things too seriously. The plot is negligible, but at its center it offers an interesting angle for a drama. That the director doesn't do all that much with it, is completely fine because that way we get more room for spectacular action. A few times, the script even tries to get some smart explanations into the game of cat-and-mouse, but this is also just a nice little bonus and doesn't make the story that much more sophisticated either. Like many other movies, you will probably forget "Line Walker 2" pretty quickly, but you will definitely remember some individual scenes. It's a rollercoaster ride that actually is a guilty pleasure. But who cares? That's exactly what makes "Line Walker 2" an old-school HK-flick!