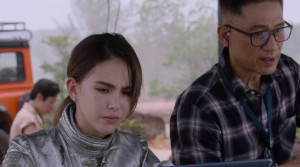 Story: On the volcanic island Tianhuo, the little girl Xiaomeng loses her mother when the dormant volcano suddenly erupts. Since then, twenty years have passed and now Xiaomeng (Hannah Quinlivan) is also working as a volcanologist. She has emotionally distanced herself from her father Li Wentao (Wang Xueqi), among other things because he himself has stepped out of his daughter's life. He cannot handle the fact that his wife died in front of his own eyes. Xiaomeng is working on Tianhuo again, while the island's volcano is said to be dormant for the next 150 years. She and her team are supposed to check whether that is really the case. The team has developed a new control system, but even though it does not set off any alarm, Xiaomeng feels like something is wrong on the island. She was hired by entrepreneur Jack Harris (Jason Isaacs), who opened a volcano amusement park on the island. She is supposed to make sure that everything is safe, but he does not listen to her warning because she cannot back it up with any data. In the meantime, her father notices something in a promotional video of the park that worries him. He flies to the island and wants to bring his daughter to safety. In that moment, and just as the first group of tourists is guided to the volcano's crater, the mountain begins to spit fire. Very quickly, the island turns into a cauldron of fire. Hot ash clouds, lava and boulders hitting the ground transform the island into hell on earth - escaping seems almost impossible... 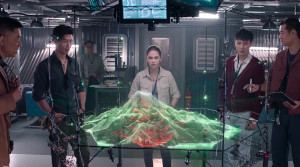 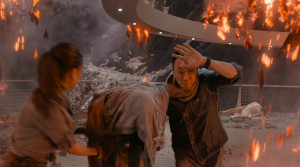 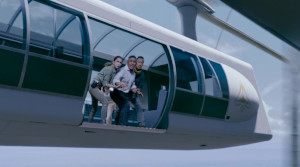 Review: "Skyfire" is one of those disaster movies during which it gets fun to get upset about how stupid a lot of things are that you are presented with. It's one of those movies that is best turned into a drinking game. One of those action spectacles that you thought was cool as a teenager, but it was the 90s. Maybe that's not surprising, since this evidently Chinese production (and in the end, we are clearly dealing with a Chinese movie) was directed by Simon West. The director of movies like "Con Air". And don't get me wrong, because even if "Con Air" is in fact one of those action flicks where you have to check your brain at the door, it is still a lot of fun to watch, a product of its time, whereas "Skyfire" just seems outdated. With "The Expendables 2" West managed to score points with not taking himself serious and the nostalgia factor which are both typical for the movie series, but in a disaster movie which takes itself all too seriously, things quickly become rather embarrassing. 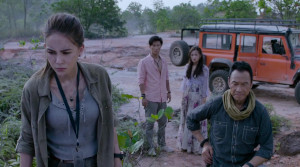 The movie's setup is also quite... funny. As if they tried to mix "Volcano", or any other flick of this nature, with "Jurassic Park". And of course, there is some background story involving a daughter and her father who grew apart from each other over time. A setup for a few emotions later in the movie. Then there is also a love story between a couple, that begins with the extremely romantic man proposing to his beloved underwater - in a grotto of a volcanic island. In addition, the two seem to be professional divers, as they are able to hold their breaths for several minutes. A cheesy scene, which you might expect from a Chinese TV drama. But mostly, all this is extremely boring, and the characters are just decals of personalities (if you can even call them that) you've seen a thousand times before. You just hope the action kicks in soon. 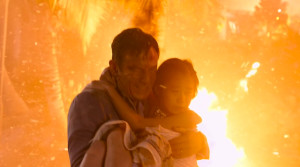 And what to say... As soon as the action picks up, "Skyfire" actually gets pretty entertaining. But it doesn't change the fact that we get bombarded with countless numbskull scenes, mainly featuring someone stopping right in his tracks during a dangerous situation, until he is hit by a rock or something like that. You can't feel sorry for those people, though: It's Darwin's natural selection. Strictly speaking, however, everyone involved in the story would deserve to bite the dust. Because, when you come to think of it, what would you do when you're told that something is moving towards you with extreme speed? First idea: It might be lava? Second: a gigantic, super-hot cloud of dust? No matter what it is, you just quickly get out of there! But our heroes decide to stop the car and find out what it is first. It's scenes like these that make "Skyfire" unintentionally funny right from the beginning. Moreover, in the world depicted here it seems possible to swim through water, into which scorching hot lava is pouring. So when I say you have to turn off your brain, that means turning it off completely, no standby mode or anything... 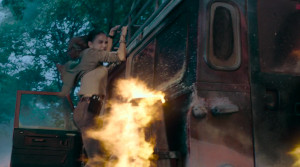 Although the script also has some very small moments in which the heroic nature of the characters gets emphasized, the pathos is not as strong as, for example, in the considerably better movie "The Bravest". Perhaps this is thanks to director Simon West. And maybe we also have to thank him for the amusement park's Western boss Harris, played by Jason Isaacs ("Armageddon"), who is actually not a cliché-driven villain, but rather somebody we can even root for. And perhaps it is also thanks to West that the protagonist actually kind of reminds us of a Chinese Lara Croft - after all, the director also shot the movie adaptation of the video game with Angelina Jolie in the lead. But our protagonist doesn't really interest us, and it's only thanks to veteran Wang Xueqi ("Bodyguards and Assassins") that the story about father and daughter doesn't leave us completely cold. But this doesn't change the fact that we just get poorly written dialogue all the time. 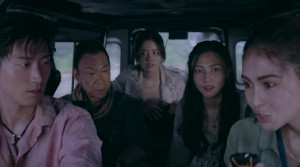 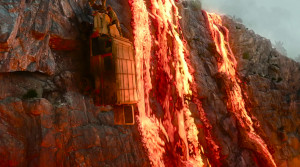 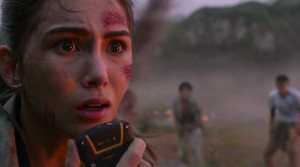 Especially at the beginning, the movie comes across a bit cheap due to its generic action movie soundtrack including the hero pathos, and then of course, there's also the B-movie charm. The special effects, however, are pretty surprising and actually look quite good. On the positive side, it must also be mentioned that the moviemakers were not stingy with real explosions and fires. But more importantly, the CGI looks very good. And although "Skyfire" is still full of extremely stupid coincidences, these coincidences also lead to some quite original action sequences, which are generally really fun to watch. So, what should you take away from this review? Clearly, "Skyfire" isn't a recommendable movie, unless, however, you meet these simple requirements: you have no demands on the script whatsoever, flat characters are fine with you and you don't question how some things made it into the movie even though they are so extremely idiotic... you really don't care! So, if you're just looking for action in form of a decent disaster movie, you could... possibly... maybe... if you have incredibly low standards... enjoy "Skyfire".