Story: Song Woo-seok (Song Kang-ho) quits his job as a judge in Seoul and moves to Busan where he sees his chance to make the big money. Since the change of a certain law lawyers are now allowed to notarize the sign-over of real estate. Song has no university degree and takes care of simple tasks like the real estate business which is why he is smiled at by his colleagues. However, Song has such a big success that he can't just hire some helping hands, but that he can also move into a new apartment. In the neighborhood he meets the owner of a restaurant, Choi Soon-ae (Kim Yeong-ae), a restaurant where he dined and dashed years ago. One day Choi's son, Jin-woo (Si Wan), disappears without a trace and it turns out that he has been accused of being a communist. Song is shocked that the boy's rights are trampled on and decides to defend Jin-woo and his student friends who are put on trial as well. But he has a tough enemy in Cha Dong-yeong (Kwak Do-won), who lead the apprehension and torture of the students...

Review: "The Attorney" is one of those movies which at first give you a wrong impression. Because this movie certainly isn't a comedy as you might assume half an hour into the story. Instead the film proves to be a drama that deals with a serious subject, the arbitrary arresting of students, who are marked as communists by the military regime in order for the government to keep up a concept of the enemy and underline being needed by the people. Even though the film drifts into melodrama the message is clear and an unusual hero carries the movie quite well. Although the movie might seem very familiar as a courtroom drama, it undoubtfully succeeds in being convincing thanks to the strong presence of its star and a few good characters. 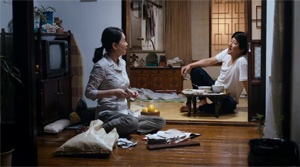 Anybody familiar with Korean history shouldn't be surprised that the film is loosely based on true events. After all there were countless crimes against democracy and freedom of speech committed under the military regime of Chun Doo-hwan. However, with Song there is a protagonist introduced who actually doesn't care about this at first, and although he doesn't have any sympathy for the government, he criticizes the students who fill the streets protesting against the government since in his opinion they would achieve more if they would finish their studies and change society at its roots. The lawyer even describes himself as someone who simply wants to make the big money and with that Song still mirrors Korean society thirty years later. 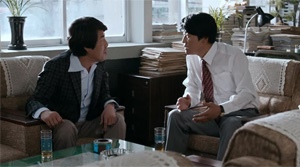 Naturally the protagonist undergoes some change and he becomes a self-sacrificing hero. Considering all the emotions and melodrama involved "The Attorney" all in all easily could have fallen from grace, but Song Kang-ho ("Snowpiercer", "The Face Reader") once again proves to be a very gifted actor, who manages to give an apparently trivial scene like the one in which he meets a restaurant owner years later, who he didn't pay, surprising depth. Accordingly, the many moments at trial when Song loses his temper because of so much blatant injustice displayed in Korean society and his own powerlessness are still captivating and aren't destroyed by sensationalism aiming for simple melodrama. The supporting actors are mostly outshined by Song, but at least Kwak Do-won ("A Company Man") manages to leave an impression as the villain.

It takes a surprisingly long introduction, in which we get to know the main character, until the actual plot development kicks in and at the end "The Attorney" turns out to be a real courtroom drama which comes along with the mandatory twists in the case. In the meantime there is also some torturing hinted at which was applied by the government of the 80s to force out confessions from students (and everyone else). "The Attorney" is thus made for the masses, an easy to digest version of the strongly unsettling "National Security". But with this the movie certainly isn't to be deprived from its strenghts. The protagonist manages to make the audience be touched by the story and the government at that time is exposed as what it really was - a totalitary regime where democratic laws existed solely on paper at best. 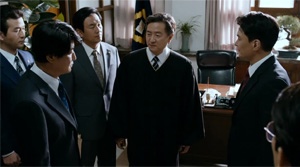 You may be able to make out that "The Attorney" takes place in the 70s and 80s thanks to the clothes, the hair-cuts and a few small set pieces, yet this drama, considering the visuals, easily could be taking place nowadays, too. Maybe a color filter should have been used in a more obvious manner to make the time travel perfect. Still, production values are lavish and everything here screams blockbuster. The debut from director Yang Woo-seok is also without any lenghts and at the end he even constantly shifts up a gear. Therefore, the only thing you can criticize "The Attorney" for is a certain predictability, if you have already seen a few courtroom dramas from Korea, and a slight tendency of drifting into melodrama. Nonetheless, thanks to Song Kang-ho this movie is still a well-achieved drama.