Tomb of the River 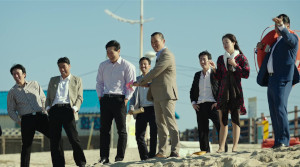 Story: Kim Gil-seok (Yoo Oh-sung) contributed significantly to setting up a resort in Gangneung, which is why he has most shares of it. However, his boss has to act as intermediary when Gil-seok's blood brother, Choong-seop (Lee Hyun-kyun), sells drugs in the organization, which reflects badly on Gil-seok. Gil-seok just about managed to stop his friend at the police, Bang-hyun (Park Sung-Geun), to follow up on the case. Eventually, peace is restored in the organization again - but not for long. The boss of another organization is murdered by his former henchman and killer Lee Min-seok (Jang Hyuk), and now Lee owns the second largest share of the resort. Lee wants to start negotiations with Gil-seok, but Gil-seok refuses to do business with the untrustworthy new player. Killing his way up to the top is the only method Lee knows to achieve his goals. Lee's influence increases with each adversary he eliminates, and soon Gil-seok is no longer safe anymore either. The police want to prevent further bloodshed, but Gil-seok eventually finds himself pushed into a corner after losing friends because of Lee and now being on his hit list as well. Will Gil-seok manage to become as ruthless as Lee and defend his position in the gangster world? 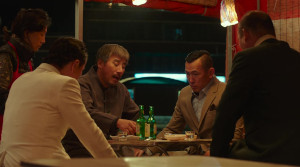 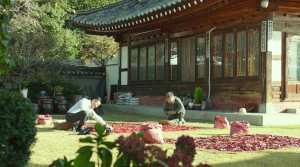 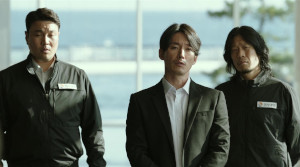 Review: "Tomb of the River" is one of those gangster flicks during which you quickly fear not to be able to keep track of the large number of characters and their various loyalties. However, this is exactly where the movie deserves its first praise, as it in fact only takes a short amount of time until you can find your bearings. Another remarkable achievement is the fact that even though none of the characters are particularly likeable, you still feel involved in the power struggle, because the individual characters are generally well-written. Ultimately, we get a rather fatalistic view of the world of gangsters, with a setting that preserves its own identity. After all, in a genre about loyalty and betrayal, you always run the risk of being reminded of HK classics. 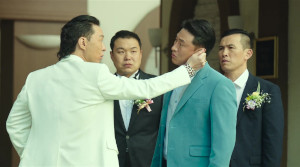 The city of Gangneung gave the movie its original title, a city on the east coast of South Korea where modernization has only just started to arrive. The 2018 Winter Olympics in Pyeongchang gave the city a bit of a boost, and so some brilliant minds - who move in illegal circles, though - grasped the opportunity and built a resort. Of course, others also want to monopolize this opportunity of printing money. With Min-seok leading the way. He is ruthless, takes advantage of the people around him, and manages to climb up the "career ladder" so quickly because he has no illusions about who he is and what kind of world he lives in. He only has eyes for his goal and does everything necessary to reach it. Negotiating, using a lot of words or exchanging courtesies is a waste of time for him, and since he chooses the path of violence, there is soon a lot of bloodshed on the streets of Gangneung. 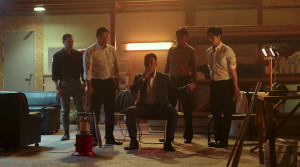 Jang Hyuk ("The Swordsman") plays the villain amongst the villains, but unfortunately, he does not deliver a particularly memorable performance. Min-seok lacks some depth, because as soon as we've understood what generally motivates him, there is nothing more to be discovered about him. This puts him in line with several other villains in that genre. Gil-seok, played by Yu Oh-Seong ("Friend"), on the other hand, is a bit more fascinating as his evil eye never leaves any doubt about him being a gangster, but one whose heart is in the right place. If one of his subordinates or partners crosses a line, he lets them know immediately and sets things straight again. This also allows him to have a friend in the police force, but this friendship unfortunately falls short of what it could have turned out to be. There is no chemistry between the two, and the police only show up when the script needs them to, and not when it would be obvious. 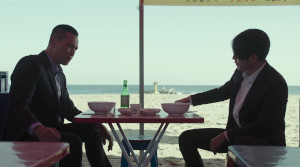 But on the other hand, it is just the chemistry between the gangsters that makes the movie so gripping sometimes. Even henchmen, who seem rather insignificant at first, get their moments and are allowed to have some dialogues with each other, proving that the different faces are not just interchangeable. In addition, some of the dialogues are pretty engaging, especially those which show that the gangsters are also people having their own fears and wishes, which they clearly have to put on ice for the sake of the gang. At times, some dialogue pieces even turn out to be surprisingly profound, but this is also necessary as the movie mainly consists of talking. Of course, the dialogues also deal with political power struggle, in which betrayal and pre-emptive strikes play a major role too. Gil-seok seems to be a good guy who almost always keeps a low profile and expects the same from his people. But when he gets driven into a corner, he has no problem showing where his roots are either. 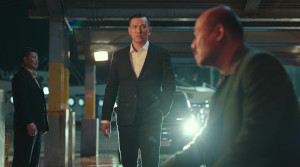 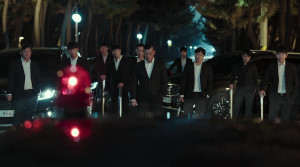 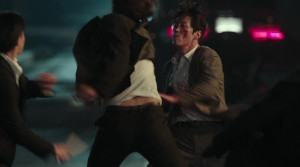 Naturally, there are also a few small action scenes. However, these are not worth mentioning and mainly consist of mass brawls. But sometimes knives are used, and so the flick can get quite bloody too. This reflects the harsh world of gangsters pretty well and also makes death seem more likely as a possible outcome. "Tomb of the River" follows a clear line with its gloomy but polished images, and even though there is no glorifying anything as "brotherhood", the gangsters are still like a family. In addition, the city of Gangneung and the ocean in the background create a nostalgic, slightly melancholic atmosphere. As a result, this gangster drama is a movie which has its own style, but still ends up being a bit unspectacular. Especially the antagonist could have been fleshed out a little more. Moreover, the movie's scale is not particularly epic, nor can the action be called exceptional. But fans of gangster flicks will get their money's worth.