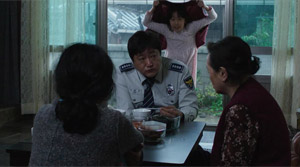 Story: Jeon Jong-goo (Kwak Do-won) is a police officer in the small town of Goksung and is confronted with a strange murder series. Family members suddenly behave as if being mad and kill their relatives. The only thing the culprits share is a strange rash. The investigation seems to point in the direction of some mushrooms eaten by the killers that could be the reason for the killings. However, a mysterious woman (Cheon Woo-hee) tells Jong-goo that the man really responsible for the killings is a Japanese (Jun Kunimura) living in the woods. Jong-goo follows up on the clue. But suddenly his daughter Hyo-jin (Kim Hwan-hee) gets sick. She starts to behave more and more odd and she in fact had contact with the Japanese man from the woods. Jong-goo takes a look at the house of the Japanese, who turns out to be everything but cooperative, and along with his colleague finds pictures of the victims. He also finds a shoe of his daughter, but she denies that it his hers. Hyo-jin acts more and more strange - as if she were possessed. So the police officer and his family consult a shaman (Hwang Jeong-min). A fight between good and evil breaks out in the small town. 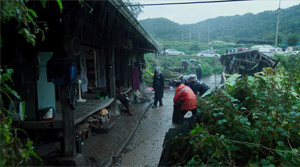 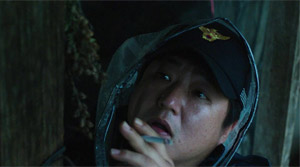 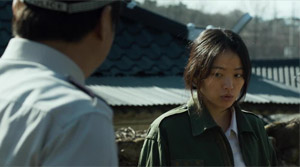 Review: "The Wailing" is one of those rare movies that when the credits roll will leave you disturbed, contemplative and completely exhausted. A horror thriller that comes along with a great number of motives and blends numerous genres as well, creating something genuinely new, while at the same time seeming familiar, too. If you had to describe the movie it probably would be best to call it a mix of "Se7en", "The X-Files", "The Exorcist" and "Memories of Murder" with small parts of a zombie flick and a comedy. If this should work out just remotely this would be a great deal already, you might think. But not only does the mix work out, "The Wailing" is also incredibly thrilling and one of the best Korean horror movies, period, since it keeps up a creepy overall tone thanks to its unsettling atmosphere. 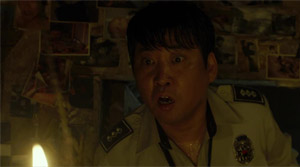 Starting as a mystery thriller "The Wailing" takes you on a real rollercoaster ride through different genres. However, the overall tone always remains that of a horror thriller. Deserving a special praise is the tremendously dense atmosphere which instantly manages to capture you with its rainy crime scenes and the small town as a location. Concerning the murder series it soon turns out that the story has mostly religious motives. Christianity and buddhism are dealt with as much as Japanese shinto rituals and Korean shamanism. The religious aspect is also responsible for some of the extremely creepy scenes of the film. Exorcising demons by sacrificing chickens, goat heads, the wild dancing of a shaman with tradtional music in the background - we get to see everything you would imagine going hand in hand with a shamanistic ritual. 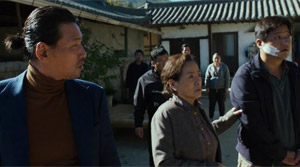 At first, director Na Hong-jin mainly gives his movie a neat horror flair thanks to a sequence of eerie events and countless mysteries. As the story progresses those moments don't get rarer, though, but even gain levels of intensity so that at times we seem to be at the end of our rope. The fantastic shots all convince with very detailed decorated sets, which add to the atmosphere to a great extent. And the screenplay by Na Hong-jin is full of foreshadowing and references of which you can probably correlate some not sooner than during second viewing. It needs to be pointed out, though, that those looking for full closure will be disappointed by the rather open ending. Still, if you followed to film attentively it will be easy to find an explanation for all events by yourself. 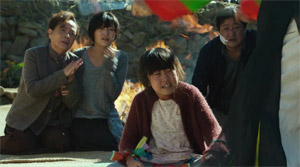 Na Hong-jin, who already wowed critics with his works "The Chaser" and "The Yellow Sea, has put a lot of blood, sweat and tears in his film, particularly when it comes to visual composition and sets. But his script really doesn't need to hide either. It offers a complex variation of the classic struggle between good and evil and is also filled with so much material that there should be a great number of ways to interpret the events depicted. Yet, this also leads to the problem that in the end not all of the puzzle pieces really fit together perfectly and retrospectively many scenes only serve putting the viewer on the wrong track, and not always in a very subtle manner either. However, it's truely a feat that "The Wailing" never feels too long, despite its 160 minutes running time. There are constantly new developments and there is never a moment when the pacing drops. On the contrary, the more the movie progresses the bigger and more epic the story becomes. 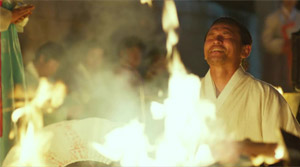 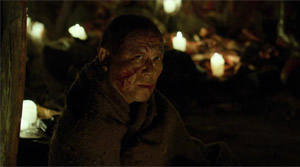 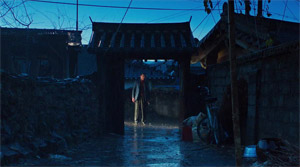 The horror thriller also greatly benefits from its actors. Kwak Do-won ("A Company Man") is rather known for his supporting roles and is wonderful as the not that competent police detective who has to fight the forces of evil in order to save his daughter. In the other roles Hwang Jeong-min ("Veteran") shines as the shaman as well as Jun Kunimura ("Outrage"), Cheon Woo-hee ("Thread of Lies") and Kim Hwan-hee as the daughter. The director's great talent for good actors also adds to the density of the atmosphere as does a discreet, but absolutely atmospheric soundtrack. Na Hong-jin wears out his viewers immensely with his eerie horror flair. There are no cheap scares either. Instead, our deeply rooted fears which have their source in the things we don't understand are made use of. The change from mystery thriller to horror film with supernatural elements is so fluent that you can't find any way to criticize it for that. Moreover, "The Wailing" is so convincing because the director constantly makes us question what's truth and lie. Until the point when complete and utter desperation unfolds. "The Wailing" is incredibly gutsy in what it aims to achieve. And extremely dark as well. An almost epic masterpiece among horror thrillers.