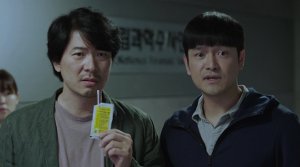 Story: Detective Woo Jong-sik (Kim Sang-kyung) gets sent to a morgue where a body disappeared and the night guard was knocked out. The missing body is Yoon Seol-hee (Kim Hee-ae), the daughter of a powerful pharmaceutical boss. While Woo is mostly drunk and cares very little about his appearance, he enjoys the reputation of being a legend amongst his subordinates. For the detective, the case is clear. Seol-hee supposedly died of natural causes, but because the body disappeared, it has to be a murder case and the murderer wants to prevent an autopsy which would bring evidence to light. The dead woman's husband benefits most from her death as he inherits all her fortune. This is why the detective calls the husband, Park Jin-han (Kim Kang-woo), in for an interrogation. At that moment Park is with his girlfriend Hye-jin (Han Ji-an), with whom he has had an affair for quite some time now. And he really killed his wife, but with a drug that is untraceable in the human body. So he has nothing to worry about. However, Jong-sik's questions still get him into dire straits. The question nagging Park the most, though, is who stole his wife's body. Then he believes to see his wife in the morgue and when he gets messages which simply have to be from Seol-hee, Park is certain that his wife is still alive and wants to take revenge on him... 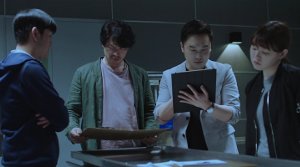 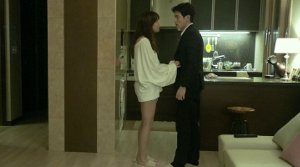 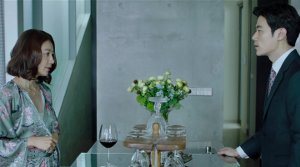 Review: "The Vanished" is a thriller which is gripping at all times and knows how to captivate its audience with a nice plot. What is especially noteworthy is the fact that the movie refrained from dragging the story out unnecessarily, which seems common practice for most movies of that genre, nowadays. Instead, we get 101 minutes of running time and a neatly packed thriller with film noir elements. The original plot, however, was not penned by a Korean author, "The Vanished" is a remake of a Spanish thriller called "The Body" by Oriol Paulo. It seems trendy in Korea to look to Europe for suitable scripts to adapt, as "Intimate Strangers" is further proof of. But once again Korean filmmakers showed a good sense of taste and reeled in material for a thriller which surprises you with a twist at every corner. How believable the whole thing is, is another question. 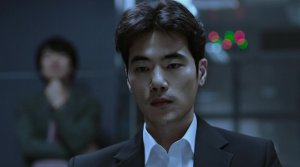 Director Lee Chang-hee plays with different kinds of genres in his debut work. The opening scene reminds us of a horror movie, which shouldn't come as a surprise as it takes place in a morgue. But as the movie progresses, there are little bits and pieces of horror elements, too. However, this seems a little bit forced, as at some point we already know that the wife is either still alive or Park sees ghosts because of his guilt-ridden conscious. Let's stay with the negative aspects for a moment as this feeling of forcing things upon the viewer arises in other situations, as well. For example, director Lee wants to establish a certain kind of dynamic by following the investigators with the camera while they are talking about the case's details. This might be a tribute to the original (which, unfortunately, I haven't seen), but the viewer is not sucked into the movie by that, but rather gets more aware of the fact that he is actually watching a movie at the moment... 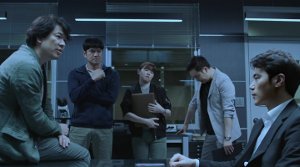 The directing is not always convincing either, which stands in stark contrast to a very well done cinematography. At some point, the morgue even becomes pretty familiar to us and almost seems like a theater stage while the rainy outdoor shots also contribute to a dense atmosphere. Acting-wise the performances are pretty solid as well. Kim Kang-woo ("Tabloid Truth") maybe could have played his role a little bit more edgy, but his character is still quite interesting. While we might consider the husband as the villain at the beginning of the movie - after all, it becomes clear quite soon that he killed his wife -, we cannot really blame him for the murder when we see in some flashbacks how his wife treated him like a trophy and that she was part of a really powerful family, who would never have agreed to a divorce. So apparently, he didn't have any other choice. However, there are always new revelations which make us see the characters' relationships in a different light, making the story so thrilling. 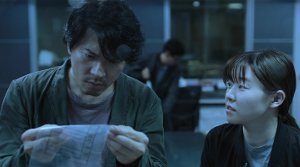 The most fascinating thing about "The Vanished" is that the thriller doesn't just simply ask the question of who the murderer is, as would be the case in any other thriller, we actually have to ask ourselves what really happened, too! Only then the question of who, when and why arises. The only problem here is that it makes the movie more liable to plot holes. While watching scenes which add even more questions, we get aware of the fact that the director will never be able to connect all the little pieces to a satisfying ending. In the course of the movie new answers are introduced little by little, but towards the end this even distribution of answers doesn't happen anymore. Instead, we get a lengthy resolution with a lot of explanatory monologue. Granted, it is not a bad resolution and some very attentive viewers might even have suspected one thing or the other, but it shows once more that there were too many unknown variables in the wife's plan/ that of the body-snatcher and that he/she never could have taken everything into consideration for it to really work out so smoothly. 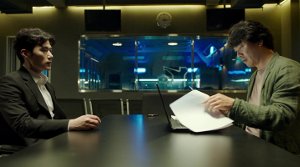 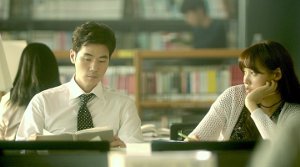 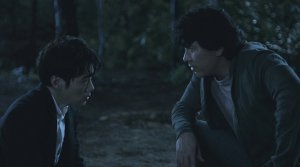 Detective Woo is played by Kim Sang-kyung ("Montage") with a healthy portion of weirdness. Woo's disinterest in the case disappears quickly, or maybe it was just faked to unsettle Park, when he finds the first pieces of evidence against him. Strangely enough, though, he doesn't listen to Park's words at all. But he has a reason for that. No character actually shows everything he/she knows, which is what makes "The Vanished" so gripping without getting frustrating. Despite the aforementioned weaknesses - the direction could have turned out a little bit better and the characters remain a little bit unspectacular -, thriller fans get exactly what they wished for. The plot might not be as brilliant as some critics made it out to be, but you get enough twists for two movies. For that, the movie certainly deserves a recommendation.