Story: Woo-gon (Kim Kang-woo) is a manager and has discovered the girl Mi-jin (Ko Won-hee). He wants to establish her as a star, yet fails to convince his superiors. Mi-jin talks Woo-gon into not giving up and continue being her manager on a freelance basis. Ultimately, Woo-gon manages to fight his way up to the top and Mi-jin celebrates her big breakthrough. But suddenly there are rumors spreading in the media that she has an affair with a politician. Shortly afterwards Mi-jin commits suicide. Woo-gon is devastated. He believes in Mi-jin's prior claim that all of those rumors are groundless and is looking into the source of them. Apparently, there is a secret tipsheet that only selected individuals in high positions receive. Woo-gon tracks down Park (Jeong Jin-yeong), who publishes the tipsheet, but Park tells him that he only recites the news exchanged by important individuals during secret meetings. When Woo-gon continues his investigation with Park's help he is visited by Cha (Park Seong-woong), the boss of a security company, who exerts serious pressure on him. It seems Mi-jin's death is the center of a big conspiracy.

Review: "Tabloid Truth" blends a plot about investigative journalism with a drama about rumors in the entertainment industry, which has already led to a few suicides in Korea. Yet, the drama aspects of the film take a backseat most of the time, so that the development of the characters leave a bit to be desired as well. Instead "Tabloid Truth" turns out to be an action-loaden thriller with a fast pacing that never really leaves room for a breather. This may irritate those viewers who would have liked to delve into the subject a little bit deeper, but will appeal to an audience that wants to see the subject tackled from a more action-orientated approach for a change. In the end, the flick delivers enough twists to even have one or two surprises left at the end, but the screenplay still could have dealt with the subject in a more subtle manner. 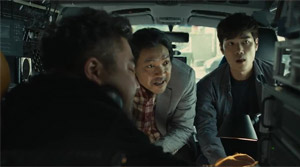 The movie is more precisely a mix of "Whistle Blower" and the less known "Norigae", which showed us what kind of favors Korean actresses often have to do for their producers in order to be successful in the business. Quite often this leads to depression and suicide as some true cases in the Korean entertainment industry are proof of. Thus, "Tabloid Truth" has already a strong starting point, but it can't make full use of its strength. The rumor mill, which can destroy your whole career just like that, may be in the center of events unfolding, the mental suffering going hand in hand with it sadly isn't shed light on, though. Instead, we get a hero that goes on a quest for vengeance at which end he wants to see justice prevail. 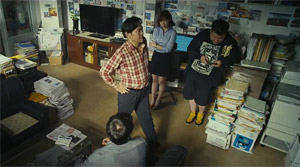 Kim Kang-woo ("The Taste of Money", "The Gifted Hands") plays a manager who probably has fallen in love with his client, but never confessed his love to her until it is too late. Without a reason to live anymore he proves to be incredibly stubborn and risks to have his fingers broken countless times. He has more luck than brains, because his self-sacrificing search for the truth often would have come to a sudden end if it weren't for Park, played by Jeong Jin-yeong ("The King and the Clown"), standing at his side and channeling his blind rage in a meaningful way. Yet, it never really becomes apparent why Park helps him. In a likable supporting role there is also Ko Chang-seok ("The Showdown") to be seen.

The actors do their part for us to happily follow the thrilling story, but it is still striking how illogical the actions of some individuals are at times. Ok, Park may not be able to call the police because his line of work isn't really legal, but that the villains can't succeed in taking out Woo-gon once and for all becomes almost unintentionally funny. Deliberately funny on the other hand are a few fights as well as a few other scenes, although they don't really work out all of the time. After all, standing in stark contrast to the comical scenes is an almost dark tone. The violence and jokes thus aren't beneficial for each other. Moreover, the movie isn't as clever as it wants to make us believe. Accordingly, we start to wonder why a high-ranking politician suddenly believes a source that obviously has already spread rubbish about him. 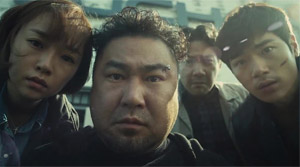 However, one of the biggest flaws of "Tabloid Truth" is that substance is put aside in favor of the movie's entertainment value. We often get to see chasing scenes or a few action scenes that you actually aren't used to see in this kind of movie. The high pacing may make you sit at the edge of your seat, but there still is a serious lack of drama which inevitably should have accompanied the story in order to give it more weight, also forge a bridge to reality and doing so maybe even convey some message. A lot is just hinted at, though. Director Kim Kwang-sik ("My Dear Desperado") convinces with a high pacing and a (sadly only at first glance) smart story. Somehow you just miss a message at the end, but then again the movie entertains quite well. Well, sometimes that's just enough, isn't it?