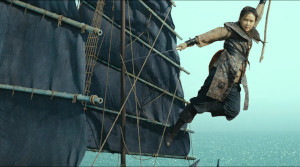 Story: Jang Sa-jeong (Kim Nam-gil) is a soldier and opposes his superior Heung-gap (Kim Tae-woo), who wants to support the head of their unit in overthrowing the king. Sa-jeong injures Heung-gap in a duel and flees. From then on, he lives with a small group of thieves in the mountains. In the meantime, the pirate Yeo-wol (Son Ye-jin) confronts Captain Soma (Lee Kyung-young) as he wants to sacrifice some of his men in a negotiation with the royal court. Yeo-wol defeats her captain in a duel, and he goes overboard. As the new captain, she enjoys the admiration of her crew, but she soon has to face some major problems. Three years have passed since the fall of the king, and China's Ming Dynasty has given Korea the new name Joseon. During the passage, however, the royal seal was swallowed by a whale. But the officials responsible for this misfortune tell the king of Joseon that pirates had stolen the seal. Secretly, though, Heung-gap is tasked with finding the whale and retrieving the seal. Heung-gap, on the other hand, forces the pirate captain Yeo-wol to catch the whale, otherwise he threatens to cause a bloodbath in all potential pirate villages. When the thief leader Sa-jeong hears about the seal, he assumes there will be a great reward if he finds it. So, he too, goes to sea, although he knows nothing about seafaring. It doesn't take long before he runs into Captain Yeo-wol and also meets his nemesis Heung-gap again... 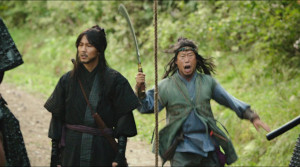 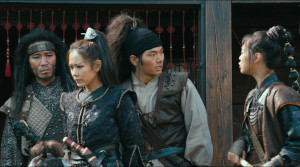 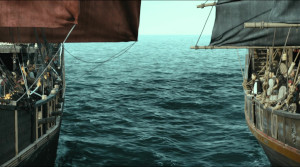 Review: When Netflix recommended "The Pirates: The Last Royal Treasure" to me and the trailer actually looked pretty good, I remembered that a few years ago, there was a movie which was somewhat of a predecessor (the movies can also be seen as separate works, especially since the cast is completely different). So why watch the sequel from 2022 first if I would be much too late with my review anyway? To my surprise, "The Pirates", released in 2014, is also a pretty entertaining flick. In addition, there is actress Son Ye-jin in a role which is unusual for her. What you can expect here is simply an adventure movie with the right amount of action and comedy, but it also comes hand in hand with one or two problems. Thankfully, the soundtrack is not one of those problems, because it avoided copying "Pirates of the Caribbean" for a hundredth time. Even though, maybe the same cannot be said about make-up and costumes. 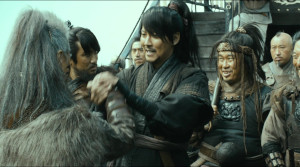 First of all, however, the unconvincing CGI has to be criticized. Sometimes it even destroys the illusion of being at sea. Especially those scenes, in which the actors obviously move in front of a green screen, stand out in a negative way. A particularly "elaborately" produced scene includes an action sequence in which a gigantic water wheel rolls through a town, crushing everything beneath it, while Yeo-wol follows the thief Sa-jeong on a "water slide". On paper, this might have seemed impressive, but - even though the sequence is quite entertaining - this is also where it is the most obvious that director Lee Seok-hoon's vision ("Two Faces of My Girlfriend") and what we actually get to see are poles apart. Does that get frustrating? Not quite as much as you would think. The high pace and the comedy content sometimes even suggest that the movie might in fact not take itself too seriously. 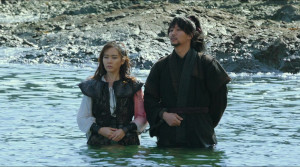 Nevertheless, there are actually some serious scenes, especially since this adventure flick is also embedded in a historical context. The transition from the Goryeo dynasty to the Jeoseon dynasty caused a lot of suffering in the country and the country's status as a vassal state of China gets critically addressed here. This does not go well with the light-hearted tone and the humorous portrayal of the protagonist Sa-jeong, who sometimes comes along as a freedom fighter with extraordinary sword skills, only to then take to his heels in panic in the next moment when soldiers chase after him. Yet, actor Kim Nam-gil ("The Closet") is still able to give his character a slightly more nuanced charisma, so that you can actually take him seriously. But a big surprise is probably seeing Son Ye-jin ("The Truth Beneath") in her first action role. She seems a bit cold, but she plays the role of a strong woman among all male pirates convincingly - also thanks to the costume and make-up that suit her well. 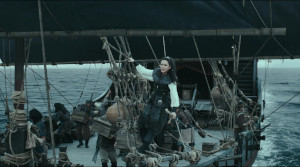 Son does not come across as helpless in action scenes either, even though there is clearly a stuntwoman standing in for her quite often. But Lee Kyung-young ("Black Money") as the villain is also praiseworthy, because - thanks to his experience in various serious roles - his performance as the antagonist manages to ground the movie and makes the pirate captain look not as clichéd as he could probably have with a less skilled actor. Besides, the story is full of entanglements (and coincidences), so that you actually get two heroes who meet their respective nemesis at the end. This is surprisingly satisfying, and the mixture of pirate setting and wuxia-style action actually works quite well too. The romance between the robber and the pirate sadly lacks chemistry, but the whale unexpectedly brings some emotion and drama to the movie. It's certainly not what you would call a properly polished flick, but some of the chaotic elements in "The Pirates" were probably intentional anyway. 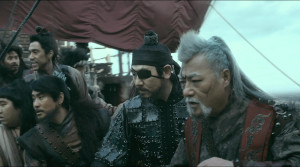 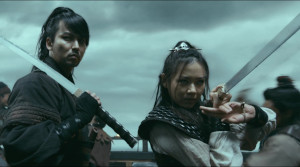 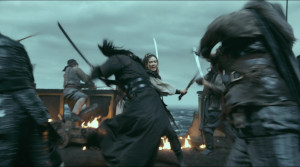 The storylines of the two good parties are linked by actor Yoo Hae-jin ("Luck-Key") as the pirate who "runs over" to the robbers' side. His presence often upstages the rest of the cast, and he is responsible for the majority of the humor. Unfortunately, this also means that he is responsible for one of the movie's main problems as well: While there are indeed some pretty funny moments, slapstick mostly dominates the movie - and this should have been dialed down a bit. Despite this circumstance and the sometimes unconvincing special effects, "The Pirates" is exceptionally entertaining. A simple adventure flick of the kind you would wish for in this genre: not that much depth, but a few nice ideas, and above all, high pacing, appealing action, and likeable characters. Sets and costumes/make-up are also nice to look at, and additionally, there is a story including various elements that come together in an enjoyable way towards the end. That's enough for good evening entertainment.