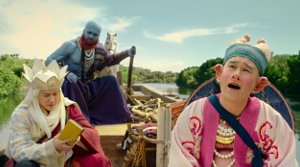 Story: Xuanzhuang (Feng Shaofeng) is on a journey to India to obtain the Holy Scriptures and bring them to China. He is accompanied by the monkey king Sun Wukong (Aaron Kwok) who gets the chance by the goddess of forgiveness to atone for his sinful deeds by protecting the monk. Xuanzhuang's other companions are his students Bajie (Xiao Shenyang) and Wujing (Him Law). On their journey, the group is attacked by a river god and they end up in a country, in which only women live. Xuanzhuang meets the country's queen (Zhao Liying), who makes a secret trip. She instantly feels a connection with the monk and doesn't know what to make of it. Xuanzhuang has similar feelings. However, the country's law requires the men to be executed immediately, as men are supposed to only bring chaos and destruction. The queen's consultant wants to carry out the law right away but the queen decides against it. She secretly helps the monk's group to escape, but by doing so, she provokes chaos and destruction all the more. Especially, the river god wants the men to be banned from his country because he was never able to act on his love for the consultant himself ... 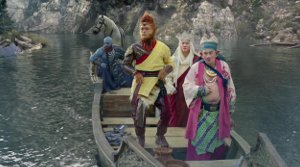 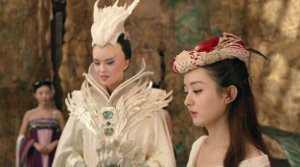 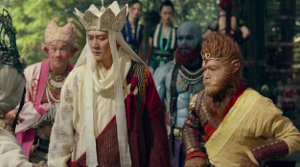 Review: The "Journey to the West" continuous. This movie series directed by Cheang Pou-Soi is based on Wu Cheng'en's book from the 16th century and is one of many adaptations. But this series' sequel "The Monkey King 2" was a surprisingly well-done fantasy story about the monkey king and his adventures with the monk Xuanzang. At a time when fantasy flicks from China are basically just a massive CGI spectacle - and rarely convincing ones as such - this was a welcome change. Unfortunately, the third installment in the series is definitely a step backwards. Or maybe even a few. Even though the movie originally wanted to portray love with its different facets, it falls short when it comes to its characters, the chemistry between them and it just relies too much on special effects to satisfy fans of action cinema. It's obviously supposed to be a family movie, which wants to score points with its 3D effects. 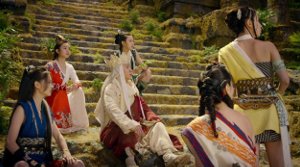 First of all, it may seem positive that the movie makes an effort to portray a modern image of women. And this coming from China? It doesn't take long, though, and it gets clear that the tribe reminiscent of the amazons is not depicted as a group of modern women after all. The women dally with the men as if they were in some sort of modern Chinese romcom and they seem everything else but independent. And it gets especially bad when the male heroes magically get pregnant. What's that supposed to be about? Do they want to make men live through the pain of pregnancy? Not at all, abortion is the movie's choice of topic here. Whatever you might expect, the result and the message conveyed is not only questionable but downright irritating or even shocking. A really strange occurrence, which could have easily been cut from the movie. 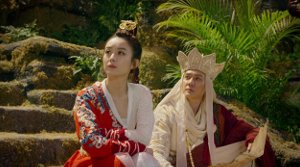 As mentioned before, though, the movie is mainly about love and all its nuances. The center is the romantic story between the monk and the queen. This love story also seems to be some kind of test for the monk, who actually has a holy task and is supposed not be deterred by anything. But in the end, this plot doesn't affect us at all. The characters, especially the queen played by Zhao Liying, are flat and do not manage to raise any interest. The forbidden relationship between the queen's consultant, played by Gigi Leung ("Aberdeen"), and the river god is a little bit more intriguing. A forbidden, tragic love story, which works better than the rest, even though we get to see very little of the characters. Unfortunately, their love story dwindles into a plug for an action-packed CGI finale. 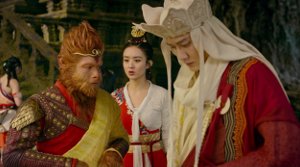 The biggest criticism is the change in focus from the monkey king to the monk. Although, this might have worked if the monk would really have been the focus. It is simply a huge disappointment that Aaron Kwok ("Port of Call") doesn't get enough screen time to develop his role a little bit more, or simply to portray the monkey king. Even though he didn't manage to convince me as an actor, his version of the monkey king is the the best I have seen so far. Wukong's playful nature makes some of the slapstick moments work a little bit better than the ones by other characters. The problem is that in general the movie is designed humorously but the jokes do not really work all of the time. It is just too obvious that this is supposed to be a family movie meant to entertain everybody. But real movie enthusiasts will not get their money's worth. 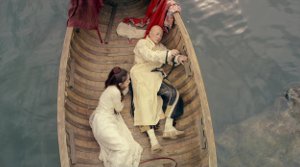 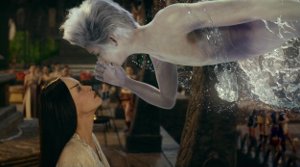 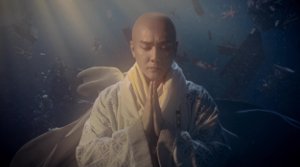 Furthermore, the other reoccurring characters fade into the background in favor of a story which doesn't have any structure and therefore eventually makes you yawn. Even the action sequences and the respectable CGI effects cannot make us overlook this fact. The director even botched the finale, which is as unmotivated as the rest of the story, and you have to ask yourself how he managed to get so little out of the source material. Of course, there is a sense of adventure here and there, but except for the romance between the queen's consultant and the river god, it is really disappointing how little is made out of the love theme. At least, the end is bittersweet, which can almost make up for everything else. But apart from that, the third movie in this series remains disappointing and doesn't compare to its predecessor in terms of quality. Of course, there are several other sequels planned because the movie did well at the box office, but you can only hope that the director will not tailor the movie to a wider audience again but rather offer up some real substance.