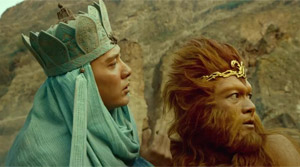 Story: Young monk Xuanzang (William Feng) is supposed to journey to the west in order to receive the Holy Scriptures which will bring peace to the world. Just about being eaten by a tiger he frees Sun Wukong (Aaron Kwok) from his prison in the Five Elements Mountain to help him. The goddess of forgiveness instructs the monkey king Wukong to accompany the monk on his journey to the west and protect him from the dangers he will come across on his way. On the trip Xuanzang also meets Wujing (Him Law) and pig demon Baije (Xiao Shenyang). Just like Sun Wukong they become disciples of the monk and protect him from all kinds of dangers. The biggest threat comes from White Bone Spirit (Gong Li) who wants to eat the monk in order to gain eternal life and youth. She attacks the travelers over and over again, but since she is very cunning only Sun Wukong sees the traps she sets for them thanks to his special powers. Meanwhile, Xuanzang is sad about the wild outbursts of the monkey king and the countless bodies he leaves behind, not knowing that the dead are in fact demons and that Sun Wukong is just fulfilling his duty. The group is about to slowly fall apart and White Bone Spirit seems to get closer and closer to achieving her goal... 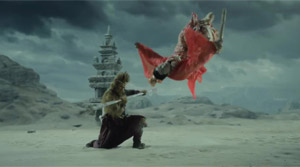 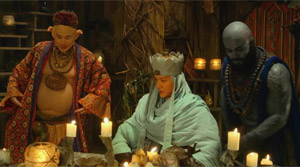 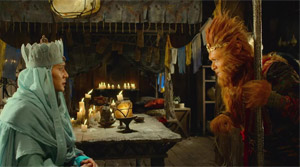 Review: Once again we get one of those sequels nobody asked for. But to the surprise of everyone you have to give kudos to the Chinese filmmakers, who like their Hollywood colleagues lust for the sure-fire money of a sequel. To be precisely it's Cheang Pou-Soi who manages with the sequel to his extraordinarily disappointing "The Monkey King" to deliver an epic fantasy flick, which actually plays in a completely different league. Since there has been going wrong a lot in the first installment it shouldn't come as a surprise that this time a lot of things work out better. But Cheang doesn't just fulfill his duty to make everything a bit more solid, but even manages to bring to the table one of the best adaptations of Wu Cheng'en's "Journey to the West". At least in parts. This is especially because the film deals more with its characters and doesn't come across as a chaotic special effects mayhem like the first one. Why didn't Cheang do so right from the start? 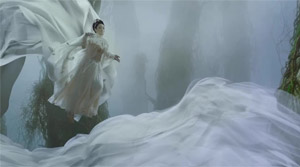 First, let's talk about the improvements. Although the first installment is just two years old and cost 82 million dollar the second part manages to showcase absolutely convinving and breathtaking cgi-effects (scenes which are exceptions can be counted on one hand) and this despite a budget of "merely" 60 million dollar. They actually are on par with Disney fantasy flicks. What makes the special effects so well is that they don't constitute the whole movie, but just embellish it - in other words just the way it should be! The fantasy adventure also seems more grounded because not every single scene has been shot in front of a green screen. There are in fact real sets or outdoor shots to be found. Because of this the flick looks less artificial and also has more soul. Furthermore, because of the subtle cgi effects the action isn't that incredibly chaotic either. 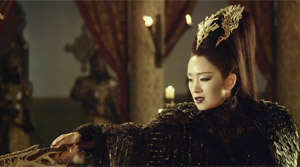 However, the movie also gains soul and substance through its story which this time is more clear-cut and also more involving. The events of the film more or less head into one direction while taking only a few short side roads. Even more interesting are the nicely elaborated characters. Sun Wukong has a few human traits to him and yet he still has to learn a lot from his master on his way to enlightenment. In the sequel it's Aaron Kwok ("Cold War") who plays the monkey king, taking over the part of Donnie Yen. Which is odd since he played the demon king in the first part. But after all, you can merely recognize his face behind the mask anyway. By the way, the make-up is pretty nicely done all throughout as well. This is especially the case when it comes to Bajie, played by Xiao Shenyang ("A Woman, a Gun and a Noodle Shop") who with his lecherous nature every now and then is responsible for some humoristic moments, too. 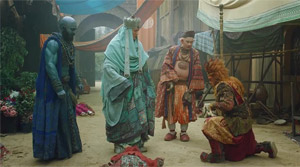 Actually, humor, drama and action are scattered throughout the film in a well balanced way. Acting-wise Feng Shaofeng ("Tai Chi Hero") delivers a solid performance and most importantly he doesn't come across as an educational monk who at some point starts to become annoying or even makes the impression of being naive. Nonetheless, it is Gong Li ("Curse of the Golden Flower") who adds a lot to the movie in terms of acting. Thanks to her subtle nuances are added to the villain. Moreover, it is wonderful to look at her delicately floating over the screen in her fantastically cgi-animated dresses. "The Monkey King 2" is full of fascinating characters and the story also takes its time to gear down every now and then and take care of what's essential, getting us emotionally involved in the events. Something which the first installment didn't manage at all. 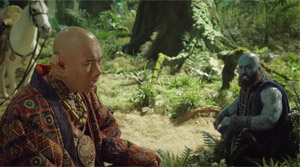 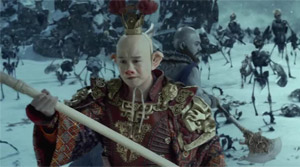 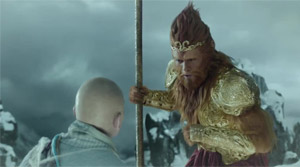 Nevertheless, you have to make concessions when it comes to the action. Sammo Hung may be responsible for the choreography, but the confrontations can't really be called spectacular. That is from a purely martial arts-centered perspective, though. Because there are after all once again epic fights and a showdown that is almost too big for its own good. In the end you can call "The Monkey King 2" a well-achieved fantasy flick which can make use of the source material quite well and also gives the story something fairy tale-like without making it look unbearably garish and colorful. However, at some points it's easy to see that the movie has some empty spaces or that it is a bit volatile. That's because you simply can't push the source material, and here we only get to see a small part of it, into a 2-hour movie in an adequate manner. If you can accept that and accordingly damp down your expectations - which should already be the case anyway after the countless mediocre adaptations - you will get a nice fantasy picture here.