The Gangster, the Cop, the Devil 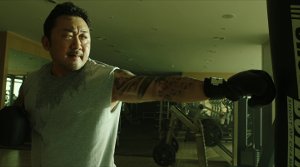 Story: Jeong Tae-seok (Kim Moo-yul) is a detective, who struggles with the fact that as a cop he has hardly any impact on crime. It's not only that his team's success rate in solving cases is pretty low, but also that he has no means to lock up the gangsters on the street. He constantly tries to be a thorn in gangster boss Jang Dong-soo's (Ma Dong-seok) side, but that doesn't work out, because Dong-soo bought off the detective's supervisor. Therefore, Tae-seok has to listen to his boss' tirades, regularly. One day, though, the policeman is called in for a murder. Somebody was stabbed in his car. And there doesn't seem to be any motive. Soon, the detective finds out that he is dealing with a serial murderer. There have already been murders like this before, but his boss doesn't believe Tae-seok. Then, some days later, Dong-soo, of all people, gets attacked by the murderer. However, the gangster boss knows how to defend himself and makes it out alive. Dong-soo is the first victim who survived the murderer's attack and would therefore be able to describe him. So, Tae-seok visits him, but the gangster boss claims not to have seen anything. But in fact, he has already had a composite sketch made and his people search the entire city for the killer. Without any result, though. Eventually, Tae-seok and Dong-soo agree on sharing their information. Whoever catches the murderer first, is allowed to decide about his fate. But Dong-soo also uses his information to get an advantage in the world of gangsters. Nevertheless, the unlikely duo manages to close in on the killer... 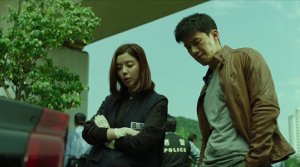 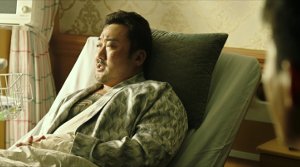 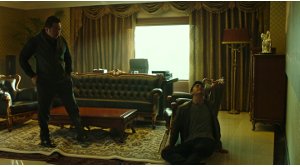 Review: On paper "The Gangster, the Cop, the Devil" looks pretty good. A gangster partners up with a policeman to get rid of a bigger evil. This concept is not particularly original, because there are already numerous buddy movies like that, but we are not dealing with a comedy here, instead we get a pretty dark thriller. Unfortunately, despite its undeniable entertainment value, the movie doesn't manage to live up to its full potential. There is always that little special something missing, which could get the feeling across the pretty cool poster actually conveys. Two guys, who hate each other, hunt a killer, one of them because it is his job and passion, the other one because he wants to take revenge - in the end, there is just a cool duo at the center of the movie. Sadly, it never really clicks between the two characters. The biggest problem is that the characters should have been written a little bit better. 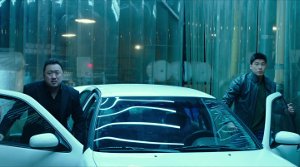 Ma Dong-seok ("The Bros") has already played one or two villains, but he has never portrayed a gangster boss in a lead role before, even though this role is actually tailor-made for him. His intimidating frame, his charisma and the ominous tranquility he gives off simply work great for a gangster. But it is not only the actor's charisma, which makes his role work so well in the movie, but also his character's motive of revenge and his deliberate conduct. But Dong-soo does not only want to take revenge because he was stabbed, even if that might be the reason why he wants to take his time with that, but in reality he just wants to maintain his reputation. As the leader of a gang, he can't afford to look weak. He is a businessman who wants to keep is company going and for that all methods necessary are fine. Even murdering a rival, if he can pin the blame on the serial killer. 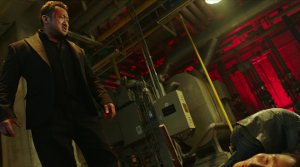 Dong-soo is an interesting character, because the needle of his moral compass is kind of stuck in a grey area. He puts somebody into a punch bag and keeps hitting it, he pulls somebody's teeth out with his bare hands, and in the next moment he gives his umbrella to a schoolgirl who is standing in the rain. But this last scene also represents one of the scripts weaknesses, as there are often things happening just because they turn out to be important in the next scene. That's just bad writing and keeps happening in other scenes as well and too many things are spelled out too obviously. In addition, it seems as if the screenwriter had exhausted all his ideas on the gangster's character drawing. The policeman, played by Kim Moo-yul ("Forgotten"), is just a stereotypical cop with intuitive methods and even if he sometimes doesn't mind getting his hands dirty, he never breaks the law. Actually, there is nothing more to his character, even if Kim gives his role some vigor, but this colorlessness is responsible for the weak chemistry between the protagonists. 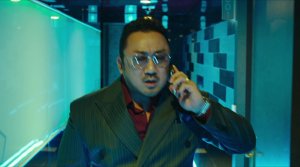 There isn't much to be said about the third character, the murderer, played by Kim Sung-gyu ("The Outlaws"). He is simply the crazy guy, whose only motive is his messed up childhood. The script is just too plain and therefore the characters mostly come across as exchangeable. But the script's strength is the shift between the policeman and the gangster and by that it manages to keep the suspense up. Most of the time, we also don't know what could happen next and more than once one of the two protagonists actually has the killer already within reach. This also causes some surprisingly well-done chase scenes either with the car or on foot. The action in this flick is actually pretty good and is one of the reasons why the movie has good entertainment value. Because both protagonists want to catch the killer, you never know whether cop and gangster will at some point get into each other's ways, or rather inevitably quit their collaboration. 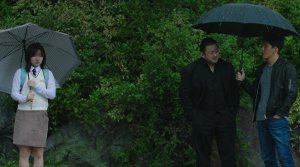 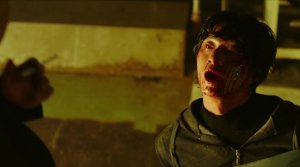 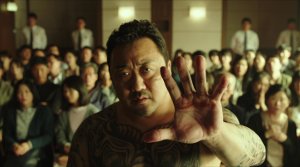 In the end, director Lee Won-tae manages to put together some important aspects for an exciting thriller and the polished images also fit nicely into the story. What is especially nice, is the fact that apart from some humorous elements, the movie actually stays pretty dark. Of course, it is also just fun to watch Ma Dong-seok fighting his way through hordes of gangsters using brute force, and when he comes face to face with the killer, there is simply no way around feeling a thrill of anticipation for the upcoming revenge. As a thriller "The Gangster, the Cop, the Devil" is definitely entertaining, but unfortunately it is a film which lacks that aforementioned certain special something, which was actually already nicely laid out for the director. He just should have done more with it. Interestingly enough, Sylvester Stallone's production company has some plans on creating a remake, also featuring Ma Dong-seok. If the script gets some revising, this could actually turn out pretty good. We'll have to wait and see.