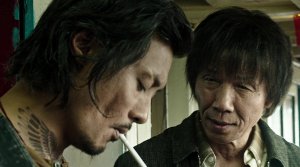 Story: Sai Gau (Zhang Jin) is a Hong Kong cop, who managed to bust an entire gang of criminals all by himself during his last case. In the process, one of the criminals died, though, when Sai threw him out of a window. Unfortunately, this gangster landed on a police car and killed a police officer. For his methods Sai Gau has to go to prison for six months, but when he is released again, he is even more reckless when it comes to criminal prosecution. His newest case is about Gui-cheng (Shawn Yue), who is a member of a gold smuggling cartel. Gui-cheng is actually supposed to move up the ladder in the organization's ranks, but his boss betrays him and he only makes it out alive because he is always prepared for anything. He also manages to escape the police. He confronts his boss, but then Sai Gau turns up again and takes the gangster boss into custody. Gui-cheng's real plan is to make his boss call for help so that he can find out the secret location of the man who is actually pulling the strings behind the scenes and to then negotiate with him directly. In the meantime, Sai Gau tries to make his prisoner rat out Gui-cheng. But the police officer can't solve the case all by himself and so he tries to get his partner A-de (Wu Yue) involved again, even though he already resigned. A lethal hunt begins in which Gui-cheng doesn't show any mercy... 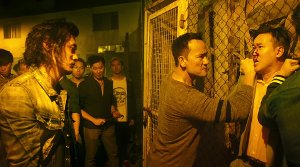 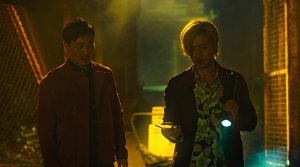 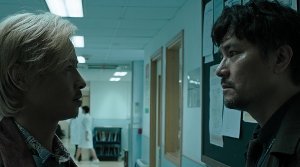 Review: A gritty, dirty and dark action flick from Hong Kong. Add an anti-hero to the mix and you've got everything you need for a satisfying movie night. But things are not as simple as that when it comes to "The Brink". The flick offers up some interesting action scenes and some creativity, but in its core, it just lacks a convincing story and, most of all, well-written characters. The story's hero remains as bland as the bad guy, which makes it impossible to get emotionally attached to the events unfolding. This might also be due to the fact that both characters are supposed to be opposite poles, but in reality, they are quite similar to one another when it comes to their relentlessness. This could have turned out rather interestingly, after all, gray areas used to be the strength of HK productions, but here the protagonists' actions are sometimes completely incomprehensible. As things progress in the movie, this can get pretty frustrating. 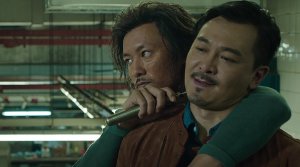 Concerning its images the movie is definitely original. The yellow-brownish pictures portray a corrupt world, in which only money or gold is important. On the other hand, this color palette also seems rather familiar. And this shouldn't come as a surprise as director Jonathan Li Tsz-chun has already been assistant director for numerous movies, including Cheang Pou-Soi's "Dog Bite Dog". This influence (Cheang has also been a producer here) might be to your liking but some editing seems rather unfortunate and almost amateurish. Of course, this also clashes with the efforts of trying to put together a specifically stylish movie. Unfortunately, the not that well-achieved editing also continuous throughout the action sequences. There are some fights in which the adrenaline gets flowing because machetes and knives are put to use quite nicely, but it's not always easy to follow the action. This is a pity, because the director did not just cast anyone in the lead, but somebody who really knows something about martial arts. 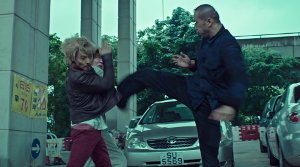 Zhang Jin ("Master Z: The Ip Man Legacy") can also prove that he is an excellent martial artist, but he is not captured at its best, which makes the action a little bit disappointing. This shouldn't be a problem, though, because it is not the martial arts but rather the relentless action that the movie tries to focus on. But this only works sometimes - and other times, it doesn't work at all. For instance, during the fight on the parking lot, the pacing is just right and numerous things happen at once, but then there is an underwater scene, which needs to be praised for its technical efforts, but its pacing is completely off and rather tiresome. Those kinds of discrepancy in quality can be found all throughout the movie. The finale, more about it a bit later, admittedly manages to make up for it, but all in all, the movie doesn't know how to use either Zhang Jin nor Wu Yue ("Paradox") to its advantage. Instead, the picture dabbles in creating some subplots which are supposed to give the characters more depth, but this, too, fails. 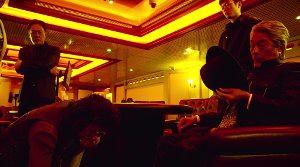 Therefore, Shawn Yue's ("Mad World") character has a woman at his side who has feelings for him, and the policeman has to take care of an adoptive daughter who is pregnant. Those subplots do not manage to make the protagonists more colorful, because the characters behave as indifferently towards the women as they do to anything else that isn't their respective nemesis. Of course, that means that those subplots seem more like a nuisance, which slows down the pacing unnecessarily. In addition, you shouldn't cling too much to the story, because it is full of plot holes. On a technical level, there is also a rather odd score put to use. All this makes sure that "The Brink" is standing out of all the HK thrillers, but not always in a positive way. The movie would have needed some final touches concerning the script and the technical execution. 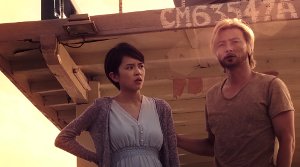 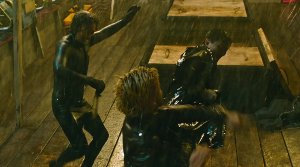 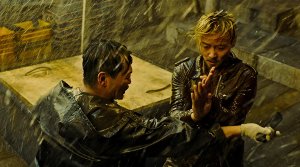 However, the finale is something special. During a ginormous storm at sea both opponents have their final encounter and the rocking of the ship and the lashing sea water make the forces of nature almost seem like another opponent during the final fight. The CGI water is done surprisingly well and physical effects are added to smooth things out which gives the entire scene an extraordinary dynamic pacing. The amount of work put into this finale is impressive. Even if the rest of the movie might not really interest you, the finale glues you to the screen. Therefore, it is a pity that "The Brink" cannot be called a good movie overall. One-dimensional characters, an uninteresting script and technically subpar (editing) to outstanding (the finale) efforts make "The Brink" a mixed bag, for which, unfortunately, you cannot give a clear recommendation.