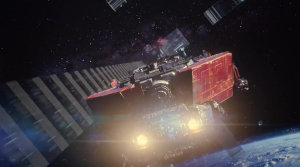 Story: In the year 2092 Earth has become almost uninhabitable. Nevertheless, humans have no choice but to try and survive on the dusty planet in whatever way they can. Only the rich can afford a life on a satellite in Earth's orbit full of nature and fresh air. Soon, Mars is supposed to be habitable and will be in no way inferior to Earth in its heyday. Tae-ho (Song Joong-ki) is one of the people who can only dream of such a future. He is looking for his daughter, whose dead body is drifting around in space, and he does not have much time left until she disappears completely into the vastness of space. To raise the money needed for an official search for her, he, his Captain Jang (Kim Tae-ri) and his colleague Tiger Park (Jin Seon-kyu) as well as the robot Bubs (Yoo Hae-jin) collect space junk, which is floating around Earth and thus could pose a thread. One day, they discover the girl Kkot-nim (Park Ye-rin), who is trapped in a wreckage floating around. Soon it turns out that she is not a girl at all. The government is actually looking for a dangerous robot that carries a hydrogen bomb and looks just like the girl they found. Tae-ho then comes up with a plan how the team can capitalize on the situation. Since they would not receive a finder's fee, as they are officially non-citizens of Earth, Tae-ho plans to sell the girl to the Black Foxes, a terrorist organization that acts against the UTS Corporation led by James Sullivan (Richard Armitage). While Sullivan wants to save the future of humanity, money is more important to Tae-ho. But he soon has to find out that things are not as simple as they seemed. 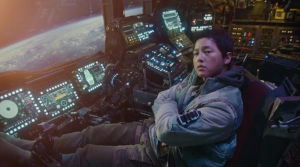 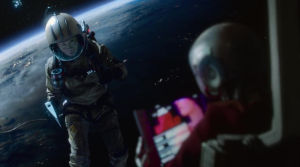 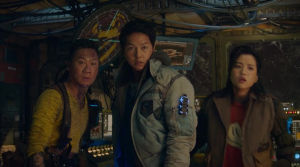 Review: Asian movie producers have been venturing into the science fiction genre for quite some time now. With Chinas "The Wandering Earth" this has already been done quite successfully, even though the movie is rather a blockbuster than a generally good movie. Despite all the hype around "Space Sweepers" you quickly get disillusioned, because the Korean venture into the genre turns out to be extremely lighthearted entertainment, including a lot of noisiness and space fights. It is particularly disappointing that the story uses all sorts of clichés and has hardly any soul of its own. Thats why the movie seems like a mixture of "Elysium" and "Guardians of the Galaxy" with a hint of "Cowboy Bebop", comparisons that are often made if one attempts to describe this movie. But theres even a little bit of "Star Wars" and "Firefly" in the mix, which is exactly the problem. The movie lacks its own identity and unique vision of a sci-fi adventure. 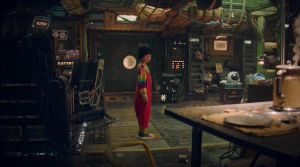 But lets start with one of the biggest strengths of the movie first. The interaction between the characters is extremely entertaining and represents the real heart of the movie. This is especially surprising because the characters are in general a little bit flat and stereotypical. Each of them has a little backstory that is hinted at, but these are not enough to make the protagonists special. Song Joong-ki, who has already stood in front of the camera for this space adventures director in "A Werewolf Boy", plays the emotionally distant but somehow relaxed and charismatic guy, who shows some heart in the end, by deciding to finally do the morally right thing. In this respect, too, there is another point of criticism and that is how generic the movie is in terms of its twists and this also affects its characters. 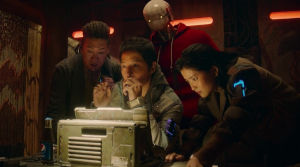 But let's focus on the individual characters for one second, because here Captain Jang, played by Kim Tae-ri ("Little Forest"), is particularly disappointing. Is she supposed to portray something like a confident leader? Then why does Tae-ho repeatedly manage to (also quite literally) push the captain into the background? Apart from a few small moments, she has hardly any significance for the development of the story. Of course, its particularly bad for a movie when the lead actors are outshined by the supporting cast. Tiger Park, portrayed by Jin Seon-kyu ("Dark Figure of Crime"), plays the ex-gangster with a very caring approach when it comes to children. It may not seem fitting that he's so lovable while at the same time he used to chop off people's hands, but that's one of the little things you're willing to overlook. The movie's secret star, however, is the robot Bubs, who was voiced by Yoo Hae-jin ("Confidential Assignment"). He clearly has the coolest moments in the movie as well. 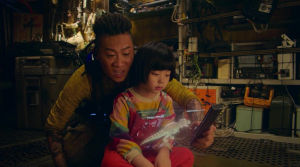 This brings us straight to what was probably important to director Jo Sung-hee with his blockbuster. A certain kind of coolness factor that could attract the Marvel audience. Admittedly, this works pretty well when it comes to the chemistry between the characters. As individuals, the four lack some depth (apart from Bubs, maybe), but together they are a chaotic and colorful team. The entertainment factor is undoubtedly there and works well. Sadly, what the movie lacks is a reasonable story. It simply uses a number of science fiction clichés, but even those well-stolen ideas are put on screen a bit half-heartedly. A perfect example for that is the villain, played by Richard Armitage ("The Hobbit"), whose personality and monologues just add to the movie's B-movie character. While the actor does have a great voice that you really enjoy listening to, the overall result is just as uninspired as most of the rest of the movie. In addition, Sullivan makes the typical mistakes of a villain: letting the heroes live at first, just in order see them suffer while everyone else is slaughtered, until they somehow manage to get free after all. 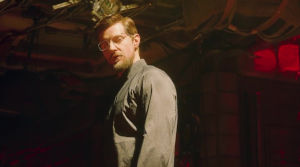 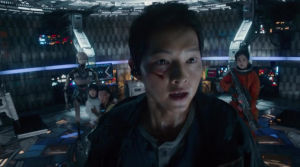 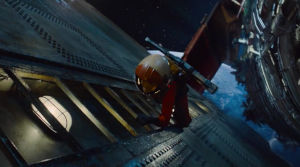 Overall, it seems as if the story was just thrown together quite unlovingly in order to provide enough motives to win over all kinds of viewers. In the end, this also means that it includes a little Korean drama, which doesn't fit at all, and turns sci-fi into just fiction. But the special effects the movie is crammed with look flawless, and this comes as a real surprise. Here, the flick doesnt show any weaknesses. However, the moviemakers also seem so proud of this that they put an enormous amount of space fights in there, which are chock-full of effects - but if you look closely, they are essentially quite boring. In general, "Space Sweepers" is also just too long and doesnt give us any surprises. Fans of the genre can already guess after thirty minutes, in which direction the movie will go, and which sidesteps it will choose in the process. Its a movie that doesnt take any risks, and while it truly is nice lighthearted entertainment, it ultimately has no identity of its own. However, you can praise "Space Sweepers" for its venture into the science fiction genre. The only problem is that it actually makes the same mistakes as its American counterparts which it takes as role models...