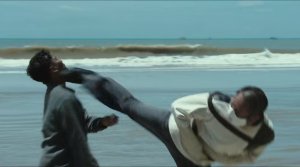 Story: Kim Yool (Bruce Khan) was a policeman until his wife and daughter were murdered by reckless gangster Carlos Kuhn (Park Hee-soon). He himself then killed everyone involved in the murder except for Kuhn, who is now a convict on an isolated island where he seized power over the prison. Because of the severeness of his crimes, Kim Yool is sent to this island, as well. He meets the girl Jin (Kim Na-yeon) there, who he saves from some gangsters. He also manages to save her mother Mali (Yoon Jin-seo), who is supposed to know Kuhn's location. Therefore, he accompanies Jin and her mother to a secret hiding place of all the prisoners who want to escape Kuhn's tyranny. This camp is run by Bau (Kim In-kwon) who is less than thrilled about the new visitor. Mali, too, has a problem with the man because he was the policeman who sent her to the island when she was pregnant. In return for saving her daughter, she tells him about Kuhn's whereabouts, though. Yool sets out to find him, but Jin secretly follows him, because she also wants to take revenge on Kuhn for killing her father. While Yool comes across Kuhn's first henchmen, Jin is taken prisoner. Mali, Bau and his men also charge the enemy's territory to save the little girl. In the meantime, Kuhn figures out who is after him and looks forward to the encounter as Yool once set him on fire and left him disfigured. 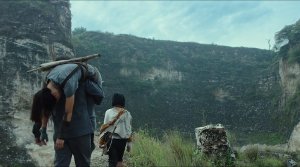 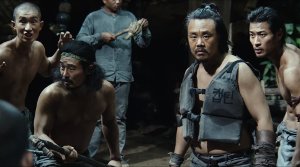 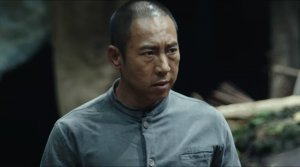 Review: If you look for martial arts movies from Korea, you will most likely not find anything worth of note. Surely, there are some rough action thrillers which offer a nice portion of well-choreographed fights ("The City of Violence" comes to mind), but next to that, you will probably only be able to point at "Fighter in the Wind". Therefore, it is pretty praiseworthy that Netflix provided the budget for putting together a pure martial arts movie without any serious plotline. Bruce Khan plays the lead and is also responsible for the script. He is a master in taekwondo and hapkido and - if anything - known in Korea for his role in the K-drama series "Bridal Mask". Concerns about him being too old for a balls-to-the-wall action movie at the age of 50, will be dispersed, though, as soon as you see the intro. 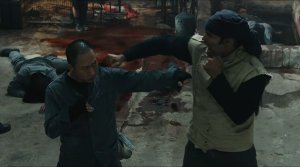 No doubt, Bruce Khan knows his stuff. And with his impressively well-toned physique he also has an intensity to him which is necessary for the screen. In addition, it is also not that bad that he hardly speaks a word. It is kind of reminiscent of old school action movies, and if you watch closely, you can even notice numerous stereotypes being covered here. All this happens with a wink; however, you can't just see everything through rose-colored glasses here. Honestly speaking, "Revenger" has numerous flaws which in general simply don't make the movie work. For one, there is the story, which basically has no plotline. There is no real motivation for the protagonists to be where they are at specific points of the story, the only motivation seemingly is to be able to shoot the next action sequence at a different location. Nothing new here. But apart from Kim In-kwon ("The Tower") in a comedic supporting role, which adds some kind of warmth to the otherwise rather dark and hopeless story, the rest of the characters remain completely flat, as well. 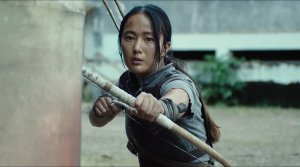 Nevertheless, director Lee Seung-won tries to give some characters a little bit more time to develop in his debut work. For instance, there is Mali, whose only distinguishing feature is that she protects her daughter with bow and arrow. There is a promising showdown between her and the villain's archeress, but in the end, this battle remains disappointing. Her close combat scenes are quite nice, as well, but what we really want becomes even more obvious thanks to them: Bruce Khan taking down an entire warehouse full of bad guys via super-fast kicks. The islanders created their own little society; however, it is quite rudimentary and the movie's atmosphere in general seems rather strange. Almost as if we were dealing with people from the Stone Age or the last survivors of a postapocalyptic world. 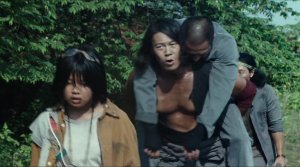 To be honest, the movie is also quite unconvincing because of its budget. The shots, as such, do not seem cheap at all, but the locations like the jungle, the beach or abandoned warehouses are somewhat reminiscent of low-budget productions. The movie was shot in Indonesia and after all, the dirty and gritty look is pretty nice. However, that is why you start comparing it to another Netflix production: "The Night Comes For Us". Where this movie is bursting with hard, relentless nonstop action, "Revenger" uses combat scenes unnecessarily sparingly. After the intro, there is not much happening for far too long and you have to wait until the 30-minute-mark until the pacing finally picks up again. Admittedly, you need some breaks during martial arts flicks to just get a breather, otherwise, even the best fights could get boring at some point. After all, a change of pace - not only in music - is a stylistic device, which is not to be underestimated. But in "Revenger" the breaks drag on for far too long. 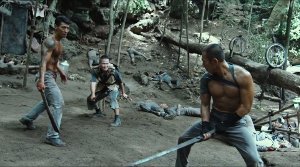 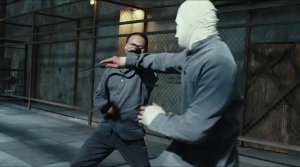 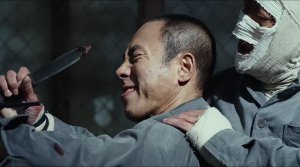 The movie's filling material, like the story and its characters, does not suffice to keep up our interest. Sometimes, you even have to wonder, why the flick isn't more brutal. Especially since Kim Yool rightfully thinks that there is no need to spare anybody on an island which is full of prisoners charged with the worst crimes, you would have expected a little bit more rigorousness. At least the punches and kicks have a satisfying sound to them so that the action is pretty convincing on that level. And as soon as we see the finale which shows us a - sadly, pretty short - sword fight against two opponents at the same time as well as a pretty satisfying encounter with the villain, you actually forget about the weak story and the dull characters. However, the movie is still not worth recommending, especially since the humor, which does not work most of the time, stands in contrast to the rest of the movie far too much for it to be able to successfully poke fun at itself. Martial arts fans should jump from one fight scene to the next. That's probably how watching "Revenger" is the most fun.