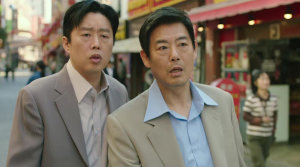 Story: Doo-seok (Sung Dong-il) and Jong-bae (Kim Hee-won) are debt-collectors who want to collect at least the overdue interest from Myeong-ja (Kim Yunjin), who has owed them money for a long time. But since she is not willing or able to pay up, the two take her daughter Seung-yi (Park So-yi) in pawn. On the next day, however, the mother does not show up at the agreed time to bring the money. It turns out that she was arrested by the police because she was an illegal immigrant from China. Myeong-ja wants to speak to Doo-seok and asks him to bring her daughter to her uncle, as the little girl is supposed to stay in Korea. Doo-seok does not understand how the mother could leave her daughter behind, but he agrees, as the uncle is supposed to pay the outstanding debt. Until then, Seuung-yi has to stay with the two debt-collectors for a few days, and over time, the three even get along quite well. But the day of parting soon arrives. However, when Doo-seok meets the alleged uncle he gets a bad feeling and later it turns out that his feeling was not wrong...
A few years later, Seung-yi (Ha Ji-won) is a successful interpreter in politics. But when she gets a call informing her that a certain person, who she has been looking for for years, was finally found, she drops everything and sets out to see her long-lost family member. 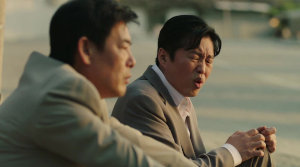 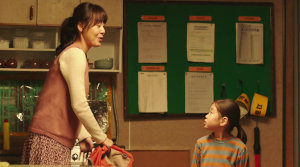 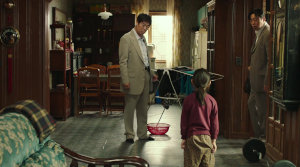 Review: If you are looking for another drama with a life-affirming basic framework, but also featuring some tearjerker moments, you cannot go wrong with "Pawn". Due to its predictable story and some rather forced tragical scenes, you would think that the flick actually is pretty cheesy and should only be recommended to hardcore fans of the genre. But that's not the case, thanks to the great chemistry between the characters. Considering every aspect of the genre, "Pawn" is a well-done drama. People, some of which could not be any more different, grow together because of some tragic circumstances and struggle to keep this new-found family together. It's a drama that tries to approach the concept of family. Of course, tearful moments are inevitable here. 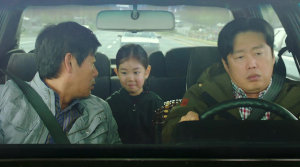 Our two debt-collectors don't seem to be such great fellas - until we realize that they actually are. But the script doesn't leave us in the dark about this for too long. Especially Doo-seok was probably once a more friendly guy, but life didn't mean well for him, although we can only assume, because we don't get to know anything about his background. After all, he does not simply steal his drink in a small shop when there's no salesperson around, first he calls for the shopman, but if he doesn't show up, what else could he do? Doo-seok's moral compass is strange, especially when he kidnaps the little girl in broad daylight. In the end, he can call it what he wants, it is still kidnapping. His partner Jong-bae always questions whether what they are doing is actually okay, and sometimes he even puts his foot down. In the end, Doo-seok is the boss, though, and with his behavior he often reminds us of a gangster. 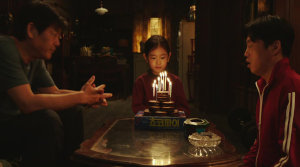 Without wanting to win any awards for originality the little girl naturally gives Doo-seok a new perspective. He develops a sense of responsibility he didn't know he had, and he discovers a new, but before that always dormant, caring side in him, which he tries to block at first by feigning disinterest and just calling the girl "Pawn". Sung Dong-il ("Metamorphosis") is just the right person for this role. Kim Hee-won ("Best Friend") often plays the villain, but this time he is allowed to show his friendlier side, and together with Sung and child actress Park So-yi ("Deliver Us From Evil") the three manage to form a wonderful trio and their great chemistry improves the movie at all times. This is why you can also forgive scenes like the one in which little Seung-yi is no longer angry with her kidnappers and just feels comfortable with them basically overnight. Some developments just happen too sudden and are hardly believable. 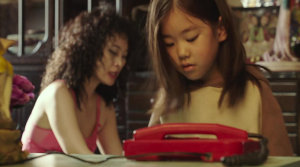 The story begins in Seung-yi's adulthood and this part serves as a small framework. Most of the time, however, the movie is set in the past. In some situations, the script tries to leave us in the dark, for instance about the question which person has been missing for ten years, but you basically know the answers all along. It's actually quite astonishing how much you can guess correctly as a viewer. Will Seung-yi ever see her mother again? Which family will she choose? What happened to the person who has been missing for ten years? Does this person have an incurable disease and that's why he/she doesn't want to be a burden for Seung-yi? All these questions inevitably lead you to genre-typical answers which are not so far away from the truth - and that should actually be disappointing. But director Kang Dae-gyu ("Harmony") provides his movie with a good flow and manages to play to his characters' strengths. He also knows when it's time for some drama. 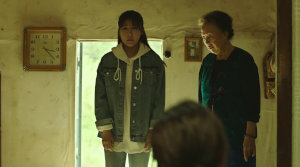 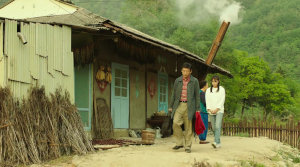 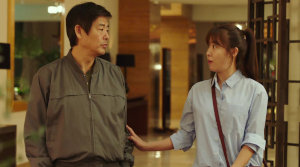 Later, Seung-yi is played by Ha Ji-won ("Chronicle of a Blood Merchant"), and at the age of 42, she portrays a... teenager. This is irritating, especially because it does not come across as unbelievable as it should. But it does get involuntarily funny when she and her mother have a sad scene together: The mother is played by Kim Yunjin ("Seven Days"), who is only four years older than her acting partner... Ha Ji-won probably ages differently, but moments like these can seem a little bit strange if you already know the actresses. In addition, there are some coincidences that play into the hands of the drama all too easily. Some of the tearful moments also seem quite forced and manipulative. If the movie had bad actors or a less talented director, this would have ended disastrously. But somehow "Pawn" manages to be sad and heartwarming at the same time, without making you feel like you're being taken for a fool. That's a pretty impressive achievement.