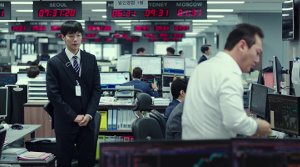 Story: Jo Il-hyeon (Ryu Jun-yeol) has only one goal in life: he wants to be rich. That's why he becomes a stockbroker. It is part of the job to go drinking with his clients and listen precisely to what the they want him to buy or sell. However, Il-hyeon is soon sidelined after he carries out an order incorrectly. It seems as if he has no chance of working his way back up to the top when suddenly his colleague Min-joon (Kim Min-jae) makes him an offer. He could earn a staggering amount of money in provision if he executes any orders by a man who calls himself "Ticket", no matter how strange they may seem at first. The young stockbroker eventually meets up with Ticket (Yoo Ji-tae) and when he carries out his first order he gets a commission which makes him rich right away. However, this was just the beginning. Ticket has other orders for him, but Il-hyeon gets scared because he is contacted by the investigator Han Ji-cheol (Jo Woo-jin), who tells him that he knows what kind of illegal games he plays. Nevertheless, Ticket manages to calm the young stockbroker down and tells him that the investigator has nothing on him, otherwise Il-hyeon would already be in prison. Moreover, Ticket is so careful with his orders that nothing can go wrong. At the same time, Il-hyeon finds out that when push comes to shove, Ticket does not stop short of getting rid of any dead weight... 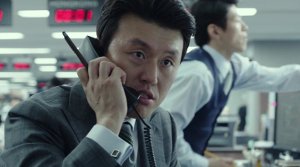 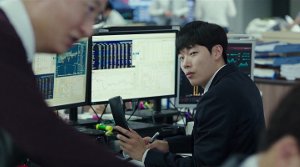 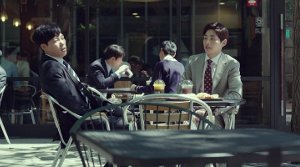 Review: It is quite obvious where "Money" got its inspiration from. "Wall Street" might be a movie from some time ago (over three decades), but the concept of greed causing an all-devouring vortex is still firmly established in people's minds. After a movie like "Default" one might even expect a little bit of social criticism or any another message behind a movie's story about the stock market. However, then you would expect too much here. Even if "Money" has no way of reaching the class and more importantly thoughtfulness of the aforementioned movie, it makes no secret of what it wants to be: an entertaining thriller, which tries to win over the audience with its fast pacing. And as soon as the viewer accepts this, the movie is actually surprisingly gripping and exciting. Technically, the movie is pretty well-done, but there are quite a lot of other problems. 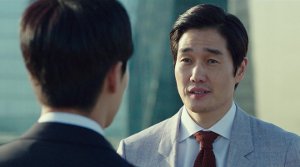 For instance, one of the movie's weaknesses are its characters who are generally pretty flat. For Il-hyeon, played by Ryu Jun-yeol ("Hit-and-Run Squad"), you would have expected a little bit more character development. Money corrupts and that is exactly what should become clear with him and his way of living. But even though we do get to see the results of his growing greed, he still somehow stays the same person as he was at the beginning, only with a little bit more self-confidence. That's not good writing, but at the same time it makes the protagonist remain likeable for us and therefore he can function as the movie's anchor. That's why you can easily get over this point of criticism. But the character problems continue with Yoo Ji-tae ("Svaha") as the bad guy. As usual, the actor is pretty charismatic in his role, however, the character lacks nuances. Ticket should have been a vision of how Il-hyeon could possible end up. Instead, he is simply reduced to being the "bad guy". 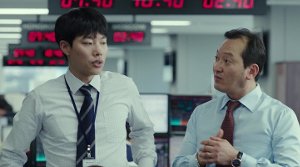 Even though the villain is reckless and does not even shy away from murder, there is still some form of bond between him and the protagonist. This becomes clear especially at the end when we get to see him smile because of Il-hyeon's slyness. "Money" is always entertaining because the cast, including the secondary characters, is always allowed to ooze out their charm. But if you want to make a sound judgement, the fact remains that the movie could have fleshed out more complex feelings between the protagonist and antagonist. As mentioned before, you can get over this rather quickly, though, because there is still some sort of development and the pacing keeps us invested in what's going on. Because the bad guy stops at nothing, there are also some action scenes which you wouldn't expect in a movie about illegal stock trading. What might sound a little bit dull actually does work pretty well. 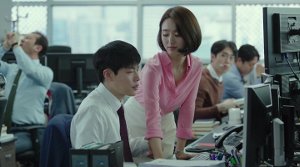 Director Park Noo-ri is no rookie in the industry even though this is her first time directing. She has already worked as an assistant director for "The Berlin File" and her experience shows in "Money". Everything seems well-polished and finely tuned to a good level of suspense. Especially the second half of the movie plays to its strength of a fast pacing. Even the end, which admittedly is maybe not that original, manages to leave you satisfied. All in all, you can say that it is only thanks to the director's good eye for the right pacing that "Money" turns out to be such a pleasing movie. Thrillers about money mostly have problems with the fact that moviemakers desperately try to create some sort of suspense, even though we only get to see numbers being pushed around on computer screens. However, Park Noo-ri refrains from an excessive use of a soundtrack or other needless things. Instead, she lets her well-written script work for her. 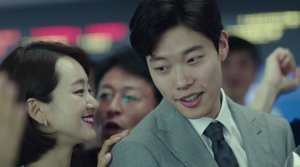 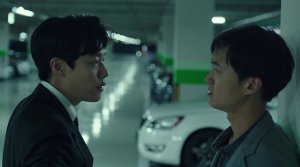 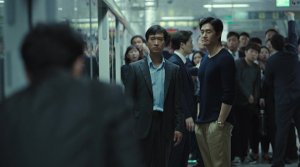 Despite the disappointment about the missing drama, which "Money" could have imbedded with more fleshed out characters, the cast knows how to carry the story and draws us deeper and deeper into the game of money and greed. Which might be the movie's most impressive achievement. Even though the story is always interesting, it is pretty unoriginal in the end and the characters, too, fall short of what they could have been. Despite all this, "Money" is just a lot of fun. Sometimes it's just a few small things that have to come together for a movie to work. "Money" is excellent proof of that. Certainly, this is not a thriller that you will remember for a long time, but for a nice evening of entertainment it is without a doubt worth a recommendation. Hopefully, we will get to see more of director Park Noo-ri in the future with a movie where she doesn't just show us her talent when it comes to the right pacing but where she is also allowed to work with a more profound storyline.