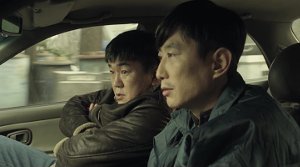 Story: Gi-beom (Kim Sung-oh) is a serial killer who was only sentenced to 15 years of imprisonment for the murder of his girlfriend even though he also killed detective Dae-yeong's (Yoon Je-moon) superior and other people. He wasn't convicted for that because there was not enough evidence. The murdered police officer's little daughter, Hee-joo (Shim Eun-kyung), has been the precincts little mascot ever since and especially Dae-yeong treats her as if she was his biological daughter. Fifteen years later, Gi-beom is released and detective Dae-yeong immediately welcomes him in order to make sure the killer knows he will be keeping an eye on him. However, Hee-joo has forged out a plan for years now to take revenge on him. In addition, she knows that there had to be two killers back then. All of a sudden, murders with the same MO happen again and Dae-yeong is sure that Gi-beom has to be the perp. He only has to find some proof. Nevertheless, he doesn't know anything about the second murderer and maybe Gi-beom is innocent this time and somebody just tries to frame him for the murders. At the same time, Hee-joo has to take her revenge without being caught by the detective. But as her entire apartment is full of notes and plans, she seems to be ready for whatever might come her way. And as soon as Gi-beom meets up with his old partner, everything goes according to her plan. 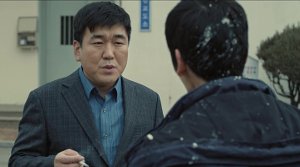 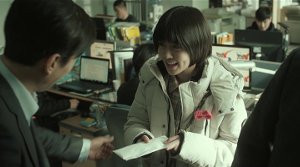 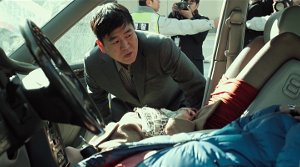 Review: There is a nice little revenge thriller hidden in "Missing You" somewhere. The only problem is that the movie is rather inconsistent on more than just one level. This applies to narrative perspective as well as to the genre. You might think that it shouldn't be too hard to combine a bloody revenge flick with a crime movie but director Mo Hong-jin kind of loses his focus one too many times during his debut. Even the characters don't really affect us. The relationship between the detective and Hee-joo could have been a good foundation, but instead they hardly even have any scenes together. Nevertheless, we are supposed to just buy into the father-daughter-like relationship. You have to mention the dark atmosphere as a positive aspect of the movie, though, and also the frequent bloody knifing. But this also shows us what "Missing You" could have been if the filmmakers had built in a decent story as a foundation. 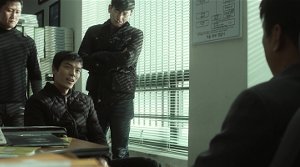 Because the plot as such is rather chaotic. There are always revelations and new information given to the characters, but the investigators don't really have to work for these insights. Everything just falls into their laps somehow and this is done in a way that makes the movie a bumpy ride. You have trouble finding yourself affected by the events as everything just stays rather superficial and it almost seems as if the screenwriter rewrote the script too many times and lost the story's core along the way. One example for this is the police's newbie. For a moment, it seems as if he might play a significant part within the movie, but this proves to be wrong. Another problematic aspect might be the fact that Gi-beom is presented to us as a rather cunning and cautious murderer, who never leaves anything behind. But when he is already wanted by the police, he causes trouble in an internet café and therefore gets recognized. 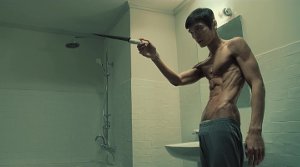 Moments like this reveal the script's unpolishedness. Moreover, the police are completely useless and a slender girl proves to be a tough protagonist who is always one step ahead of them. You can see that "Missing You" is not a thriller with a high budget when you look at the script and the constant change in focus. The pictures are captured quite nicely, though, conveying a dark and somehow seething atmosphere, even though director Mo does not deliver anything special here. However, the movie's strength might be its atmosphere. Furthermore, a specific scene makes us doubt that there actually were two murderers in the first place and hints at the fact that the second murderer might only be in Gi-beom's head. In addition, it is fascinating that for a short time you also doubt that Gi-beom is the real killer. If the director had worked more with those elements of a psycho-thriller, "Missing You" could have turned out to be a movie worth watching. 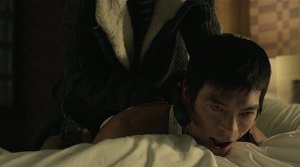 As a bad guy Kim Sung-oh ("Tough as Iron") cuts a fine figure and his unhealthy appearance as a lean but well-toned guy also adds something creepy to one of the scenes. In addition, as mentioned before, he can also convey the impression of not being such a bad guy, after all. But in general, the characters are not very well written. Yoon Je-moon ("Fists of Legend") plays the good-hearted but also incompetent - even if the script might not have intended to portray him that way - detective, which we all know far too well from flicks like this. Next to the layer of an innocent girl, who evokes the protective instinct, Shim Eun-kyung ("The Mayor") tries to add something else to her character; a soul tortured by years of pain and inner struggle caused by the desire to take revenge. But she doesn't get enough time to give her character the depth needed. The protagonist and her struggles therefore remain incredibly shallow. 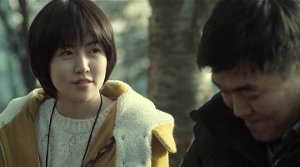 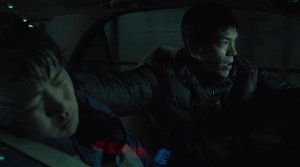 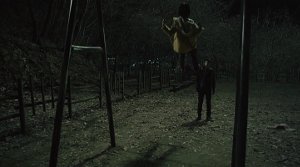 And we are also missing some kind of chemistry between the characters. You stumble from one set piece to another and you never really know how you got there. The story is actually supposed to seem complex, but turns out to be nothing more than that of a simple revenge-thriller. If it weren't for some brutal yet not too bloody scenes here and there and the dark atmosphere, there wouldn't be much left worth seeing. The incompetence shown by both the murderer and the police makes you want to tear your hair out and there's not much happening in "Missing You" that would set it apart from other movies of the genre. The ending might not be that bad, but if you think about it too much, it is not really a reasonable one either. So, if you are desperately looking for a quick genre-fix, you might sneak a peak at it, but to be honest, there is something amateurish about the movie and it is definitely the script's fault.