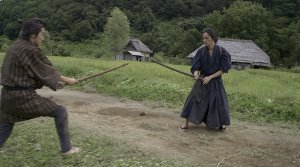 Story: Mokunoshin Tsuzuki (Sosuke Ikematsu) is a young samurai who works on a farm. To avoid getting rusty, he trains with the farm boy Ichisuke (Ryusei Maeda) and also teaches him how to use a sword. Country life is rather simple and with Yu (Yu Aoi) there is also a girl on the farm, that takes an interest in the young man. One day, though, the samurai Sawamura (Shinya Tsukamoto) travels through the village and watches Tsuzuki during his training. He recognizes his exceptional talent and asks him whether he wants to go with him to Edo. Like the young man, Sawamura is also a samurai without a master, and he claims that there is a man in Edo, who they could serve. However, this man's assignment requires a few more fighters, therefore Sawamura invites the farm boy to join them, too. But just before they want to leave, some bandits set up camp near the village. The villagers are afraid of being raided and it is exactly for situations like these that they gave Tsuzuki a roof over his head, in the first place. The young samurai talks with the bandits and finds out that they, in fact, are rough journeymen, but intend to leave the village alone. On the day the two samurai want leave for Edo, Tsuzuki is running a high fever. And when a joke gets out of hand and Ichisuke gets beaten up by the bandits, the samurai Sawamura attends to the matter. But in the end, he starts a spiral of violence and Tsuzuki has to face the fact that he will soon have to kill his first man... 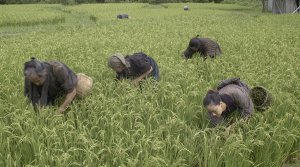 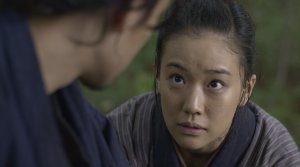 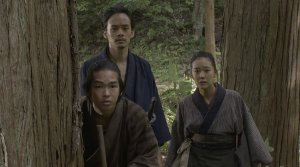 Review: Since his movie "Tetsuo, the Iron Man" from the year 1989 director Shinya Tsukamoto has been talked about as a visionary of indie films and a cult director. Critics go head over heels with praise when it comes to his work, but not everybody can understand the hype. I, for one, found a lot worth criticizing in his movie "Haze". So now with "Killing", Shinya Tsukamoto ventures into the samurai genre. Typical for his movies, this one was shot with a small budget and turned out rather short (only 79 minutes), too. Surely, you might instantly notice some similarities to Akira Kurosawa's works like "Seven Samurai". However, here the aesthetics and the glorified chivalry of the Bushido is looked at in a more critical if not even nihilistic way. That is a fascinating approach and almost even dismantles the glorification of the genre's samurai. For that, you could even praise the movie if it weren't for its slow pacing. 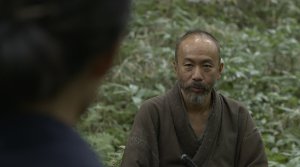 "Killing" is without a doubt a drama, and of course, these kinds of movies are allowed to turn out rather slow-paced. However, it is a red rag to me when a slow pacing and sticking with a scene for ages is supposed to seem deep when it is actually just pretentious. Exactly what a bad arthouse flick looks like. As the title of the movie already suggests, the story is about killing. And Shinya Tsukamoto does not really tackle this topic in a profound way. At one point, Tsuzuki himself even asks how killing people can come so easy to the samurai Sawamura. The story is about the fact that the young Samurai Tsuzuki follows the Bushido, but actually hasn't killed anybody himself yet. And even under the worst circumstances, he avoids killing. This inner struggle is constantly present and actor Sosuke Ikematsu ("After the Storm") does a really good job portraying the emotional rollercoaster the character goes through. 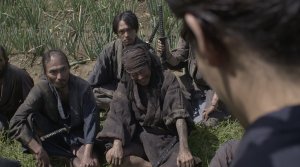 Let's stay with the positive acting performances for one moment. Yu Aoi ("Tokyo Ghoul") plays a farmwoman who has feelings for the young samurai. She doesn't want him to go away, but at a certain point in the story, Yu darts a look at Tsuzuki which is full of hatred and contempt. It leaves a strong impression on you to see these various emotions dance over her face. And even though it is not supposed to be the movie's focus, their relationship is the real highlight of the movie. Director and scriptwriter Shinya Tsukamoto plays the old samurai himself, and despite the fact that acting-wise he is unable to hold a candle to his cast, his presence is still always tangible. Moreover, his relationship with Tsuzuki is also quite compelling, because we are never really sure why it is so important to him to take the young samurai with him to Edo. There has to be something else than just the exceptional swordsmanship that fascinates him. 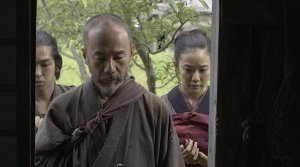 In a movie about samurai, there has to be some fights, of course. Those are rather reminiscent of classics of the genre, because the contrahents first dance around each other in order to assess the opponent's skills, and the actual sword fighting does not take that long. The fights are well-choreographed and the actors master their scenes pretty professionally. However, all this gets completely destroyed by the camerawork. Because even though the confrontations are captured in one shot without any cuts, the camera always moves around within the scene in handheld camera-style. This means that you actually miss some of the fight moves, and more to the point, you even start to feel sick because the camera does not only shake a lot, but also tilts to the left or right in extreme angles. It is a real pity that I had to use my TV's intelligent frame creation complete with soap-opera-effect to be able to watch these shaky shots. If you don't have a modern TV that can do this, you most likely will in fact get sick. 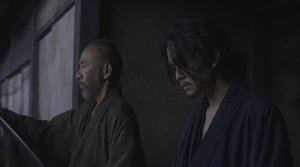 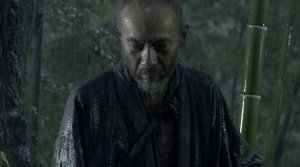 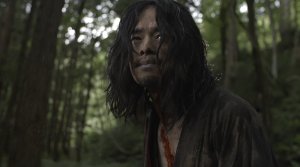 Of course, there also has to be some violence, and in particular during a scene in a cave, things turn into a brutal massacre. However, the violence is not the movie's focus, its purpose is simply to show us that even the honorable samurai is nothing more than a killer if you look at it properly. Towards the movie's end, Tsuzuki has to fight against insanity that closes in on him. This becomes clear by the movie's imagery. But this is exactly where it starts to get really pretentious, and to be honest, we just wander through the forest with the camera for minutes. This is not only tiring, but simply boring. "Killing" wants to be smarter and more profound than it actually is and nowadays, there are hardly any reviewers who are truly critical when it comes to Shinya Tsukamoto. But I have never been able to get something out of his style. I have to admit, he has a talent for creating a dense atmosphere, even in "Killing" some of his images are very well-done and the sound effects are also excellent, but you never get something truly great. And in his newest work, the shaky handheld camera is the last nail in the coffin...