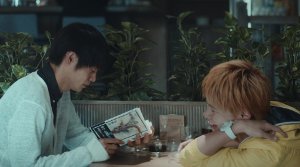 Story: Ken Kaneki (Masataka Kubota) is a shy boy who is interested in a girl who always goes to the same coffee shop as he does. When one day he is actually on a date with her everything seems to be just perfect. But of all people his date turns out to be a ghoul, human flesh eating beings which are nearly undistinguishable from humans. Just a heartbeat before Ken, already being badly injured, is getting eaten by the ghoul the being is squashed by a few steel beams. At the hospital Ken undergoes surgery and gets the organs of the dead girl/ghoul. From that day on he isn't capable of eating any normal dish and he finds out that he is now half human, half ghoul. Every day he fights a desperate battle against hunger until he meets the girl/ghoul Toka (Fumika Shimizu) who introduces him to the owner of a café. This café is a sanctuary for all the ghouls that don't have any other place to find shelter at. There, Ken becomes friends with the girl Hinami (Hiyori Sakurada) who is already being looked for by ghoul hunters Amon (Nobuyuki Suzuki) and Mado (Yo Oizumi). Meanwhile, Ken is still trying to find a place in society and he struggles with the fact that ghouls as well as humans have created a world in which neither of the two parties can live. 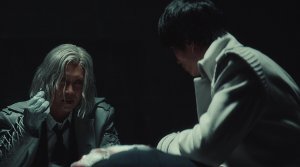 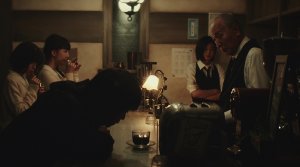 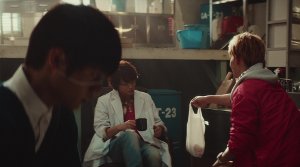 Review: It's hard not losing count with all the live action adaptations from Japan these days. Actually, there are nearly no other movies coming out of the country. This is sad, of course, especially if they don't live up to the original's level of quality. I may not be qualified to say the latter about "Tokyo Ghoul" since I'm not familiar with the source material, but a little bit of research proved that many of the problems I have with the adaptation aren't really ones in the manga/anime. The first aspect which needs to be mentioned is that the characters are all uninteresting. Ken's transformation isn't portrayed in a believable fashion and his inner struggle is merely visualized through cries of frustration. The chemistry between the individuals isn't good either. The reason for that being that the movie only scratches the surface of its motives. The movie in fact manages to create interest in the source material, but otherwise is easily forgettable. 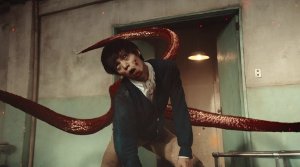 Especially the beginning drags on too much without anything really happening. There are already countless movies dealing with - in some way or the other - metamorphosis and the suffering the protagonist has to endure. How is he supposed to deal with the new situation? In a broader sense manga adaptation "Parasyte" also tackled the subject and fared a lot better. The horror aspect also came to fruition better. In "Tokyo Ghoul" everything may be supposed to look dark, but the atmosphere simply isn't tense enough and the story isn't captivating. To be honest, the story is pretty shallow. The plot's core is actually pitting two worlds against each other of which none is in the right. There is no simple good and evil, instead there is only the wish to have your place in the world. 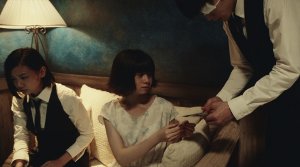 This seems to be a pretty sophisticated theme, but where does director Kentaro Hagiwara go with his story? Certainly not deep enough to matter. You get the impression that you are supposed to reflect about the different parties' motives, but the moral questions are raised in an unspectacular if not shallow manner. The melodramatic moments reserved for these instances are carried to excess and seem either unintentionally funny or are simply implausible. The biggest issue is that Ken may be supposed to be in the story's focus, yet his character is the one worked with the least. Thus, this anti-hero potentially torn apart by his wish to belong to one of two worlds creates merely disinterest and you really wouldn't want to switch places with actor Masataka Kubota ("13 Assassins"). With this script he just has to fail. 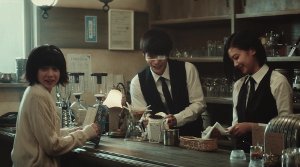 The only supporting character who really is an enrichment for the movie is Hinami since the childlike purity of her stands in strong contrast to her life as a ghoul. She makes us begin to imagine what moral problems her existence goes along with, a task that actually should have fallen to Ken. Furthermore, the "good guys" are written extremely shallow and look like the bad guys. Latter may be intentionally so, but the actual intent behind it is merely guessable. In the end, there is nearly no one you can sympathize with. Toka gives us glimpses of hidden pain within her and Ken is our anchor in the story for the simple fact alone that he refuses to eat human flesh. A highlight of the movie is the café which is a safe harbor in a dark and cruel world thanks to its cozy atmosphere. But next to that there is only little happening and when action finally kicks in we realize once again, for instance regarding the kagune (the weaponlike appendages of the ghouls), that the source material surely had a lot more to offer here. 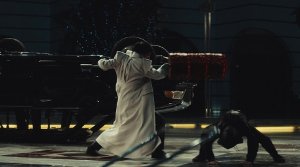 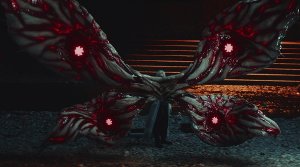 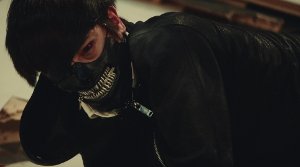 One problem with the fights is that the kagune are brought to life with CGI-effects that aren't very convincing and another issue is that the fights themselves are choreographed rather disappointing. Next to that, a sudden training sequence thrown in seems pretty out of place. The filmmakers attempt to compress something - Ken's transformation from shy bookworm to dangerous fighter - that only could have been achieved with a lot of directing chops and Kentaro Hagiwara just doesn't have that. In fact, a lot of the editing and camera work is questionable even though the film may seem being produced proficiently enough otherwise. Ultimately, we only get a sketch of a presumably interesting painting around two species which try to find their place in a world that has changed. "Tokyo Ghoul" is at best somewhat entertaining and fails where the story actually begins to become thrilling.