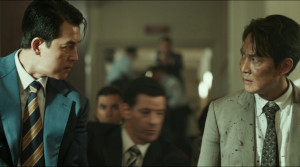 Story: It's the year 1983 and South Korea is a military dictatorship. The secret service KCIA is supposed to be restructured and efforts are focused on tracking down North Korean spies. In addition, the two KCIA agents Park Pyeong-ho (Lee Jung-jae) and Kim Jeong-do (Jung Woo-sung) have to perform damage control when an attempted assassination during a visit of the South Korean president in the USA almost succeeded. A lot of things are still unclear about the background, but the agents do know that secret information must have been leaked. Eventually, a high-ranking North Korean scientist comes forward asking for help to desert. In return he is willing to give away the identity of the mole in the KCIA with the codename Donglim. But he will only reveal the name after he arrives in South Korea. As a previous intel of his turns out to be true, the KCIA wants to intercept him in Japan during a trip with a North Korean delegation. But things go pretty wrong. As a result, the head of the KCIA instructs Kim and Park independently of each other to find the mole within their ranks by all means necessary. Because there is bad blood between the two agents, they start putting each other under the microscope. It turns out that neither one of them has a clean slate, but is one of them really the traitor? While the agents make life difficult for each other, they also have to prevent another planned assassination on the president. 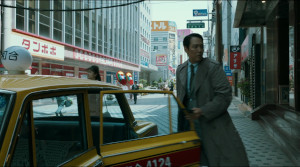 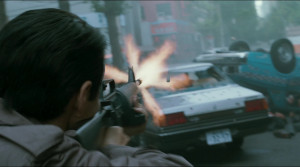 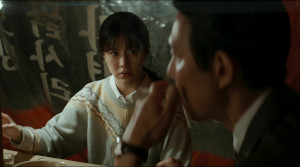 Review: "Hunt" is the kind of espionage-action-thriller, you don't expect to see anymore these days. That's not just because the movie is set in the 80s and has a compelling political background, it's also because the action scenes are a mixture of 80s/90s HK cinema and the style of Michael Mann's "Heat". On top of that, we get a game of cat-and-mouse which is urged forward with an incredibly high pace and - not just because of its level of suspense - is reminiscent of "Infernal Affairs". In short, with regards to what this espionage thriller aims to be, it is pretty successful and easily manages to outshine seemingly highly-polished movies like "Steel Rain 2". The action is rough, yet neatly arranged, and one twists follows the next without giving us much time to breathe. This is the kind of cinema we didn't get to see for a long time now, and you basically don't have to say much more to clearly recommend this movie. However, this doesn't mean that the flick wouldn't have any problems. 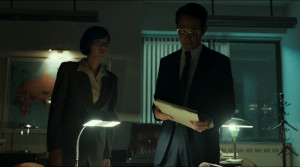 But maybe, you should take a few seconds to acknowledge what Lee Jung-jae managed to pull off with his debut work as a director. Surely, his success as lead actor in the Netflix show "Squid Game" made more than just a small contribution to giving him the opportunity - and probably also the confidence - to go behind the camera. Lee knows how to always retain control over the events on screen while keeping up the high-octane pace, but without making the mistake of not giving the viewer a little break from time to time. Moreover, it's remarkable that, even though the cuts are sometimes very quick and things tend to come thick and fast (occasionally, there are even some flashbacks thrown in there), we never feel disoriented or emotionally unattached to the events. With sure hand Lee manages to steer clear of mistakes that (Korean) movies display quite often nowadays. 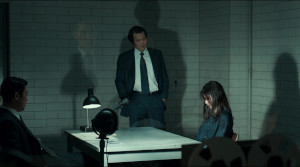 However, you shouldn't always take the movie too seriously. There are twists at every corner, and agents turn out to be double or triple agents or even more than that. Who actually does what for what reason seems to change every minute. This makes it hard for us to warm up to either of the two main characters, because you constantly believe that one of them has to be the villain. But whoever this role actually falls to keeps changing, and even though Jung Woo-sung ("Innocent Witness") apparently seems to fulfill this function, things are not as easy as they seem at first when we see his shock about the events during the Gwangju massacre in a flashback to his time as a soldier. Lee Jung-jae, who also co-wrote the script, plays with this uncertainty about who we should be rooting for. Maybe it's because of this intended ambiguity that the characters are not as fleshed out as you would have liked them to be, but the seething rivalry and the hatred between Park and Kim, two guys who in fact are not that different from each other, make them come across pretty human. 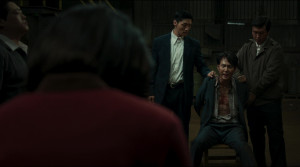 What's particularly interesting is the historical backdrop of the events, because even though the president at the time is not mentioned by name here, it is clearly supposed to be Chun Doo-hwan, and so the movie deals with a real assassination attempt, which North Korea was probably responsible for, while taking some creative liberties telling the story. The torturing of students who protested against the dictatorship gets addressed just as much as America's wish to keep Chun in office in order to ensure some stability opposite the communist North. If you are not familiar with the history of South Korea, you might feel a little lost at times, but you should still be able to follow the most important key points. Cinematically, though, it's not enough for Lee to make us believe every colleague could be a traitor, therefore pushing the tension in a room to extremes, no, he also has to add some gunfights here and there. And those are violent, the localities in the middle of the streets almost seem like little war zones (and therefore also remind you of "Heat"), and there is also quite the numer of explosions. 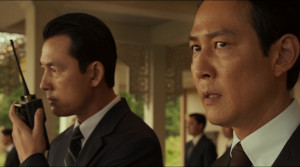 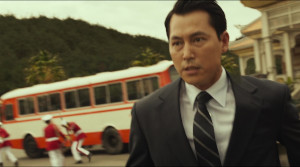 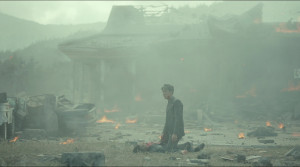 The amount of action you get here is a little surprising, especially compared to other Korean espionage-thrillers, and the cat-and-mouse game between the two characters, - who inevitably have to have some skeletons in their closets as KCIA agents, but still somehow managed to preserve something like a conscience - gives "Hunt" a special touch. Of course, you shouldn't expect any realism when it comes to the action, as agents tend to survive collapsing multistorey buildings. But it fits the atmosphere that Lee Jung-jae creates here. As mentioned before, you eventually can't take the countless twists and turns seriously anymore, but you reach a point at which you are already so invested in the movie that you don't feel like rolling your eyes. The finale is also fittingly epic, even though the ending of the showdown might be a little frustrating due to the historical backdrop. Despite some points of criticism, Lee Jung-jae still managed to turn his debut behind the camera into something impressive and he created a highly entertaining and gripping espionage-thriller with plenty of action, a movie which easily manages to outshine the majority of the competition.