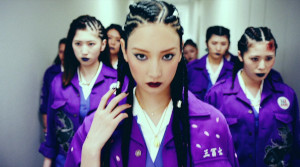 Story: Naoko (Mei Nagano) is 26 years old and works in an office. She leads a simple life and during breaks she talks to two of her colleagues about TV shows or the new handsome employee. However, there are three women's cliques in her company whose leaders made it their goal to become the strongest "office lady". That's why Shuri (Nanao) takes on Shiori (Rina Kawaei) and defeats her. Shortly afterwards, Etsuko (Miyuki Oshima) is released from prison, where she was because she had put some competitors into hospital. She, too, gets defeated by Shuri, who is therefore the new number one now. Naoko watches the power struggle from the sidelines, when one day, she sees an unknown woman beat three of Shiori's underlings as they bully someone. On the same day, the woman is introduced as the new colleague Ran (Alice Hirose). Shiori herself starts a fight with Ran, but she is no match for the new colleague. And so, the power struggle starts all over again. Ran also has to defend herself against Etsuko and Shuri, and she eventually becomes the leader of the now united clique, although that was not even her goal. So far, Naoko has been able to stay out of this parallel world of the "office ladies", but it just so happens that she becomes friends with Ran. Since that day, her life has become more and more complicated, especially when gangs from other companies start to show up and want to challenge Ran. 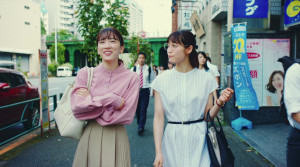 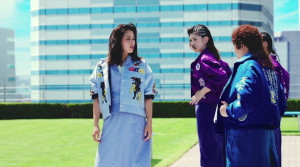 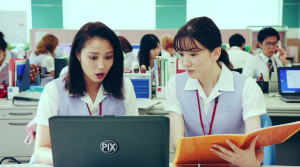 Review: "Hell's Garden" is one of those movies whose plot description you read and still don't know what exactly you should expect here. But that's exactly how this flick manages to arouse interest. And the comedy turns out to be surprisingly entertaining. Movies like "Crows Zero" or the more recent "Tokyo Revengers", in which gangs make each other's lives difficult while trying to look cool, are made fun of quite nicely. Instead of testosterone-charged juveniles, the focus in this movie is on women throwing punches. This brings a breath of fresh air into the well-known story, as does the fact that gangs want to fight their way to the top of a company in which they have to pursue a very monotonous office job. In all this, however, there are repeated references to typical manga stories, on which, for example, the movies mentioned above are based, and thus a certain meta-level is created. 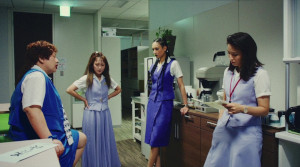 Naoko is the movie's heroine, at least that's the way it seems at first, but she is a very bland "office lady". And yet, she is always in the right spot at the right time and witnesses the conflicts between the different gangs. Not only does that mean that she takes the perspective of the viewer, but she also provides us with important background information, just the way it is in a manga. In doing so, she never fails to show us the parallels to those stories. Why she knows so much about such stories, we'll find out later on. As a heroine, Naoko is actually not at all suitable, she is more of a side kick who becomes a problem for the true heroine, as the competing gangs always target Naoko as her weak spot. And so Ran comes into play, and you think that she is the real protagonist of the story. But that's where you would be wrong too, as it turns out later. Playing with the characters' different roles is a big plus of the story. 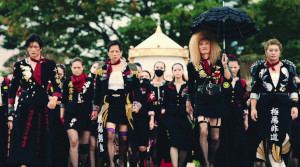 Everyone involved is familiar with mangas about gangs and so everyone reflects on their roles. This leads to some surprises. The movie constantly toys with the viewer's expectations. At first, genre clichés are used, only to then make fun of them. Due to her knowledge of the genre, Naoko realizes early on how certain power structures will turn out, after all, she knows the narrative of such stories inside out. So even when you are presented with well-known tropes, they turn into something new, because they are raised to a meta level, so that they can be made fun of with a lot of love for detail. This includes, for example, scenes in which someone says or does something cool and then the scene does not cut away, instead the people who are still present start to talk about what did not properly work in the scene or dialogue. Something that normally only happens in the viewer's head. That way, "Hell's Garden" cleverly protects itself from criticism. This comedy sees itself as both an homage to the genre as well as a slight critique on it. 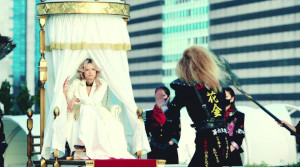 But the movie is not completely immune to a few words of criticism. It lies in the nature of this absurd story that some things are occasionally a little over-the-top. This caricatural approach often makes the comedy pleasantly weird and makes you laugh out loud here and there. But it can also take a turn into getting a little bit stupid. While this happens rarely and is probably done intentionally, it still might irritate one or two viewers. Moreover, you should not have any illusions about the fight scenes either. None of the actresses can actually fight, some punches should not even be allowed to be called as such, but at least Alice Hirose as Ran does quite a decent job, and so do a few other women. In larger brawls, however, punches often clearly miss, or attackers wait to do their movements until the heroine turns to them. This gets balanced out by the comic-like nature of the violence, though. Bodies suddenly fly through the air, blast waves appear on impact, etc. Overall, the camera work is also very dynamic and creates a good pace. 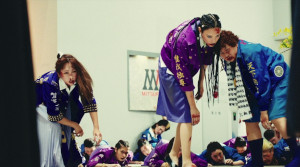 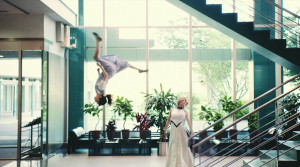 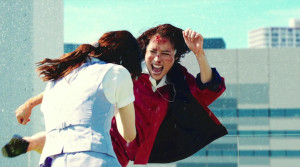 Strangely enough, despite the obvious flaws, the action is not that bad and even stands as the backbone of the movie. The pace is always high and whenever you think the story has reached a dead end, the next comic-like twist comes along. The costumes and some of the sets are also very well done and give off the style-factor of manga adaptations. Since "Hell's Garden" is actually only about women while men at best show up as colleagues you run into on the staircase, it is defining for the absurdity of this flick that there actually are a few men in supporting roles - only that they portray women and come along in wonderfully silly costumes. Endo Kenichi ("The Raid 2") seems to have an exceptionally great amount of fun with his role.
In the end, "Hell's Garden" may not always hit the mark, but it does most of the time. A comedy that often jumps to a meta-level, while it is also supposed to be simply a lot of fun in a sometimes absurd way. And at the end of the day that pays off quite well.