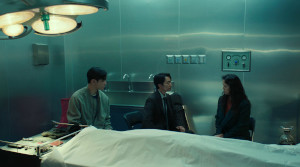 Story: Jang Hae-joon (Park Hae-il) is frustrated because he has been working on an unsolved murder case for a while. He also rarely sees his wife (Lee Jung-hyun) anymore because she works in another city, and he currently even suffers from insomnia. So, his newest case comes just at the right time. A man seems to have fallen from a mountain, but Hae-joon suspects that it was actually murder. However, when he then meets the victim's wife, Song Seo-rae (Tang Wei), he is immediately thunderstruck. The woman, who is actually from China, has a special magical attraction on him. At the same time, though, she might very well be her husband's murderer. Her husband was the reason why she got a residence permit in the first place, but it appears that he abused her. So, she actually has a motive, and therefore Hae-joon keeps close to the suspect and tails her. His further investigations reveal that she killed her mother in China and therefore fled the country. Nevertheless, it turns out that it was probably more of an assisted suicide than murder. Hae-joon tries not to be blinded by his feelings, though, and is eager to uncover the truth about the murder case. It seems as if Seo-rae actually has some secrets. But she also seems to return the detective's feelings. For Hae-joon and his job, however, his feelings turn out to be real poison... 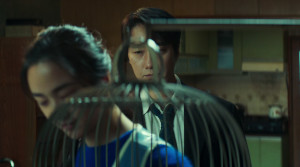 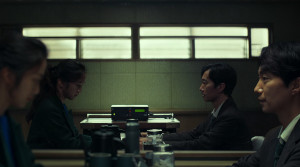 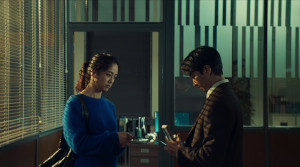 Review: By now, I think it might be a little bit unfair to always expect a huge wow effect from the works of Park Chan-wook. Even though I somewhat tried to restrain my expectations this time - also in light of some rather disappointing works in the past -, for me, "Decision to Leave" still lacked a little certain something. And yet, the movie clearly has a very unique touch that can actually be quite pleasing. And there is also no doubt that Park is in the top league of directors. The somewhat playful tone is particularly entertaining, because even though Park has always shown a knack for absurd scenes and therefore has a good eye for humor too, his works are mostly known for their serious tone and high level of suspense. This time the level of suspense is also pretty impressive, but at least in the first half of the movie the atmosphere is surprisingly lighthearted. In addition, the movie is mostly dealing with the theme of love. 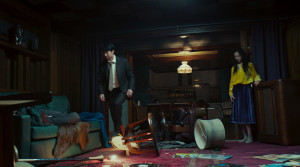 Technically speaking, though, love has always been the driving force in Park's works, because it is also used as the catalyst for the revenge plot in movies like "Sympathy for Lady Vengeance". With "The Handmaiden" the director went a little more into the direction of love too, so "Decision to Leave" seems to be the logical continuation of the theme. But you don't have to expect a romantic flick here or almost something like an erotic thriller, which already caused problems for actress Tang Wei in China when it came to "Lust, Caution". Because even though the detective has undoubtedly fallen head over heels in love with the immigrant - and thanks to some beautifully shot scenes the attraction the woman has on him is captured quite nicely -, the flick is still also a thriller in which you constantly have to ask yourself whether So-rae is not just playing games with the detective and actually is the femme fatale everyone else already expects her to be. 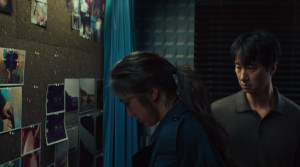 But the movie is not excessively dramatic. The characters are written quite nuanced. So, the detective does not simply leave his wife just because he has feelings for another woman. At the same time, he is professional enough - at least on the surface - to keep a certain distance to So-rae, who may have killed her husband after all. Of course, his professionalism is put into perspective by the fact that he tails the woman, which actually boils down to a state-legitimated stalking... And So-rae even enjoys it since she is interested in the policeman anyway. However, the extent to which she might just pretend to be in love, knowing very well that her every move is being watched, makes up the great appeal of the flick. Nothing is certain here; feelings might be exploited and detective Hae-joon is quite aware of this. It just doesn't change his yearning. 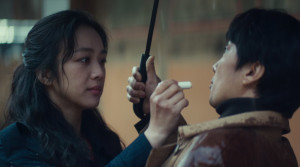 Communication is also an interesting theme within the story. So-rae's ability to speak Korean is enough to handle everyday life without any problems, but when it comes to the case and complicated facts are presented, Hae-joon's partner has to use simple vocabulary, or the suspect needs a translation app in order to communicate. This language barrier is shown quite often so that you become aware of its importance for the movie easily. Of course, love seems to overcome this hurdle with ease, but do Hae-joon and So-rae really know each other? Do they really understand each other? This barrier also contributes to the story's point of friction as to whether So-rae is a murderer or not. With "Late Autumn" Tang Wei already starred in a Korean movie in 2010, and since she is married to the director of that drama, it's no surprise that her Korean is pretty good. But as an actress she also manages to convince with her passively warm nature and she gives the protagonist something mysterious. 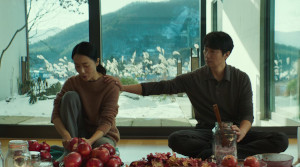 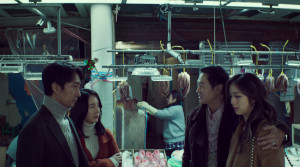 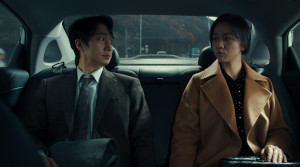 After a twist, the events from the first half of the movie are kind of taken up again in the second half and are mirrored here. The movie then gets a bit more serious again, because while love's bittersweetness stood in the foreground before, the focus is now more on pain. Unfortunately, all this remains a bit too shallow, and the ending is also disappointing, as it kind of reminds you of art house cinema. Park Chan-wook is a director who is able to score points with his extremes, but there is no trace of that here. His pictures, however, are above all criticism. He consistently plays with perspectives and for example shows us the events from some object's point of view. In addition, there is an excellent soundtrack, something that already managed to enhance Park's best works in the past by a lot. "Decision to Leave" is one of those flicks that most festival critics praised to the skies without really looking at it critically, as it is in fact one of Park's weaker and somehow more unspectacular movies. At the same time, Park is still a great director and manages to create a special atmosphere in his romantic thriller that is quite pleasing. That's certainly enough to be worth a recommendation.