Story: Anna Chen (Tang Wei) is in prison because of murdering someone. One day she is told that her mother has died. Because of good conduct she is allowed to go to Seattle in order to partake in the funeral service. In the bus to Seattle she is approached by the gigolo Hoon (Hyun Bin) who asks her to lend him some money for the bus fare. Anna immediately leaves no doubt that she isn't interested in small-talk and also doesn't want her money back. In Seattle she meets with her family for a brief moment and settles the formal matters as soon as possible for her to stroll through town alone. By accident she runs into Hoon again, who offers to give her a city tour. At first Anna is unwilling, but Hoon's polite intrusiveness eventually convinces her to accept his offer. The two nearly don't have to struggle with a language barrier, yet they don't really talk about each other a lot. Hoon doesn't make a secret of his profession, though, and in the end Anna also tells him that she has to go back to prison the next day...

Review: With "Late Autumn" you get a drama that targets all those viewers that are willing to embark on a quiet journey into the life of a withdrawn woman. It is beyond question that this movie will be too lengthy and emotionally distant to your average audience. However, speaking in favor of the film are some wonderful pictures, that elicit something enchanting from the drabness of the constantly foggy city Seattle, and a story that is captivating on a very subtle level. And that to the surprise of everyone without any tears or big emotions. "Late Autumn" rather resonates with you after the credits have rolled. In any case, you will need a good amount of patience and an interest to dive into the movie in order to really gain something from it. Yet, there certainly are quite some things to be found. 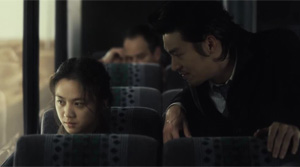 "Late Autumn" is a remake of the 1966 film by the same name from Lee Man-hui, except for a few derivations, for instance the fact that Hoon isn't a wanted criminal and of course also the choice of the location. To shift it to Seattle is pretty interesting. That way the two are connected by a common feeling of being alien in a country right from the start, although they are actually able to speak English and communication doesn't pose a problem for them. Hyun Bin's English is pretty ok, but that of Tang Wei almost sounds like that of a native speaker. Nevertheless, her character in the movie is withdrawn and rarely does express herself with words. To be more precise she almost doesn't communicate at all, so that the viewer also has to question whether she really committed the murder she was sentenced for or simply just didn't make a statement. 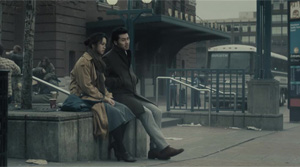 Later on we get to know that Anna was unconscious and doesn't know anything at all about the actual circumstances of the murder. However, it in fact isn't important to clarify the guilt question as the legal system has already pronounced a sentence and thus this aspect doesn't stand in the movie's focus. In a world outside of prison Anna has long become a foreign body. After welcoming her Anna's family doesn't know how to treat her, apparently she has mainly been invited because she is needed for giving her signature to sell the house, which she partly has inherited. Tang Wei ("Wu Xia") is the center of the film and she also knows how to take care of her being the pivot. That is even the more astonishing as she nearly shows no facial expression let alone emotions. Her voice also sounds very cold and deep.

Hoon, played by heart-throb Hyun Bin ("My Name is Kim Sam-soon"), considerably pales beside her, even though he is the one that is easily more accessable. He constantly and actively approaches Anna and slowly there seems to be an invisible connection developing between the two. Although this whole relationship eventually needs to steer into the direction of a love story it doesn't feel like that at all. Rather there are two lonely souls in the progress of finding and giving warmth to each other. Being a gigolo Hoon is used providing women with an unforgettable experience, but with Anna it is a personal wish of his. The ending turns out to be a little bit poor as Hoon's profession catches up with him, but here it shows that dramas obviously have to comply with certain clichés. 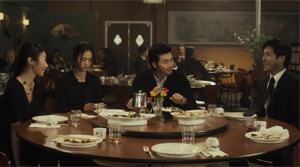 "Late Autumn" offers an outright minimalistic story that isn't worth talking about. Making up for that, as already stated, is some subtle acting and at one or two points even some symbolism. Especially enchanting, though, are the pictures. The polished look, lots of fog, the somewhat very dreamy atmosphere, all of this adds up to not making the slow pacing become a real problem. Yet, it needs to be pointed out that "Late Autumn" is far less entertaining than most other Korean dramas. Director Kim Tae-yong, who has also been co-directing "Memento Mori", delivers a very interesting drama, nonetheless, that will very much please fans of the genre with its quiet and minimalistic nature.