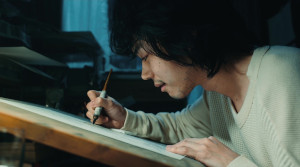 Story: Yamashiro (Masaki Suda) is a manga artist who up until now has been denied his big breakthrough, so he still works as an assistant for a well-known manga artist. He lives with his girlfriend Natsumi (Mitsuki Takahata), who always supports him. But when he presents his best work yet to a publisher and, despite great drawings, gets rejected due to unappealing characters, he gives up. However, he is still supposed to look for a house that radiates joy for his employer, and so Yamashiro wanders through the city by night and makes a sketch of a house from which he hears loud music. When he sees that the door is open, he enters and discovers four handcuffed bodies at a table. Each person was murdered with a knife, and the artist even catches a glimpse of the killer (Fukase). When the police arrive, Yamashiro is interrogated by Detective Seida (Shun Oguri) and Detective Makabe (Shido Nakamura), who are leading the investigation in this case. Yamashiro doesn't tell them that he saw the murderer, and instead he uses his experience and the face of the killer for a new manga. One year later, Yamashiro is extremely successful with his manga series. Then detective Seida once more contacts the artist as he reads manga too, and a new case, in which four family members were killed, looks like an exact copy of the artist's work. Apparently, the murderer re-enacts the murders from the manga... 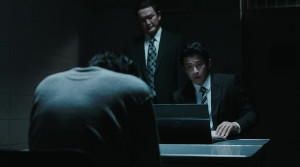 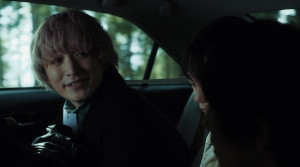 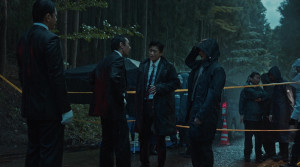 Review: "Character" is a thriller just like you would imagine it to be. Dark, rainy, and bloody. Even though we get a detective, who has to deal with a rather unhelpful witness, he is not the protagonist here, instead it's the manga artist, who is ready to dive into the mental abyss of a killer for his art. But this is exactly where the director and the screenwriters didn't go far enough. Yamashiro, who seemed too good-natured at first, just comes off as withdrawn and distant after his experience, so you have to ask yourself whether his girlfriend actually only stays with him because of his success. When it comes down to it, the flick fails at what you would have expected to be its main focus: its characters. In the end, this thriller offers some good ideas, which could have gone into interesting directions, but unfortunately, the movie only takes a few cautious steps along these lines and then returns to its light entertainment mainstream core. 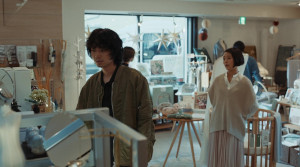 Let's stay with the characters for a moment. While we actually get some kind of reason for the killer being such a flat character - how practical that he is already predestined to be a manga character with his pink hair and his way of dressing -, the movie clearly failed to flesh out the protagonist Yamashiro. It's just not enough that from time to time, actor Masaki Suda ("Assassination Classroom") wears a sullen look on his face when it's implied that he lives out a darker side through his comics and could possibly become a killer himself because of his trauma. His girlfriend may give him the support needed to never cross the line or lose himself completely in the darkness, but you have to connect the dots all by yourself, because the movie does not really address it, and this is just my good-natured interpretation. 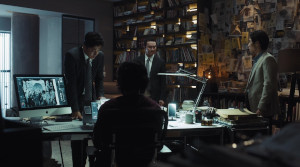 Shun Oguri, who already portrayed a detective in the equally dark thriller "Museum", plays the investigator here, who provides us with some kind of support and makes sure that we stay emotionally attached to the story. He also manages to preserve something good and positive about him, despite all the horrible things he sees in his job, and that, along with his love for manga, makes him pretty likeable. He is also the one who repeatedly pushes the story forward, but this task does not only fall to the detective, as coincidences play a major role in "Character" too. That's where the story threatens to fall apart, as the plotlines want to go into different directions all at once, even though the story itself is not really that complex. The movie starts to deal with the killer's past far too late, and the connection that exists between illustrator and killer - after all, the killer believes he creates a work of art together with Yamashiro - is also not dealt with adequately. 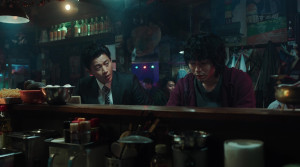 What the movie completely neglects, though, is the question of guilt, which is somehow never really touched upon. The cartoonist did not tell the police that they did not catch the real murderer, and that he saw his face. This means that with each following murder, Yamashiro basically gets more blood on his hands. But that doesn't really seem to interest anyone, as even the detective encourages the artist to continue drawing, even though Yamashiro creates the basis for further murders. Here, the movie could have worked a lot more on a moral level, depicting Yamashiro more three-dimensional because of his inner struggle. In addition, we get a twist which is very predictable. While "Character" sadly fails on the character level, it manages to score points with its atmosphere. The images typical for a dark thriller as well as the degree of violence and blood will satisfy genre fans. Since we constantly get to see dead bodies of entire families, including children, the movie is clearly not for the faint of heart. 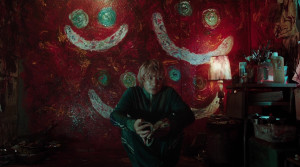 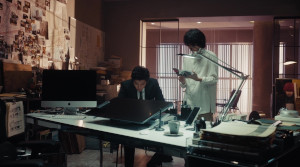 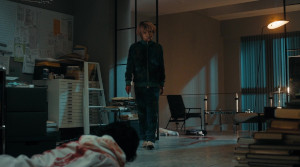 While director Akira Nagai has already been able to prove his talent with romantic dramas such as "After the Rain", he goes in a completely different direction with "Character", but he still knows how to deliver. Somehow, the movie feels kind of familiar, a little reminiscent of "Seven", but it also has some nice ideas, such as the cool opening credits brilliantly capturing Yamashiro's shock. In addition, the manga motif is captured beautifully, because the drawings made for the movie are great and convincingly represent Yamashiro's talent. The end also manages to offer a great deal of suspense. Killer and artist are mirrored, or rather swap places in one scene, which picks up on a fascinating aspect that you feel like should have been the movie's actual core. Unfortunately, the screenwriters never really got specific here. This turns "Character" into kind of a disappointing thriller, even though it is otherwise exactly the stuff genre fans are looking for.