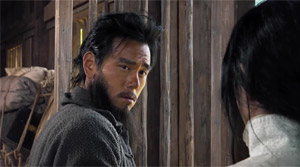 Story: In 1914 China is ruled by ruthless warlords. One of the worst of them is Cao Ying, whose son Shaolin (Louis Koo) kills for fun and during his father's invasion of Stone City annihilates a whole school with children. Teacher Bai Ling (Zhang Shuying) manages to escape with her class and heads towards Pucheng. On the way she runs into Ma Feng (Eddie Peng), an odd guy, who is only thinking of himself but during a quarrel wth a few thugs also saves Bai Ling and the children. When the teacher meets him in Pucheng again she asks him to protect her and the children on their future way, but he declines. Pucheng is guarded only by sheriff Yang Kenan (Lau Ching-wan) and a small brigade of fighters after the military has left the city in order to fight against Cao Ying. When Shaolin turns up in the small town and haphazardly sheds blood, Yang has his hands full. Because his initial plan to execute Cao Ying's son for his cruel crimes meets with resistance from the townspeople. After all, this would lead Cao Ying to destroy Pucheng. Colonel Zhang Yi (Wu Jing) gives Yang one day to release Shaolin, but Yang wants to uphold law and order... 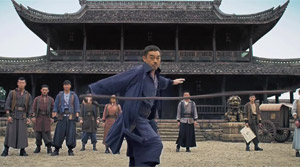 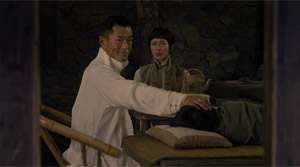 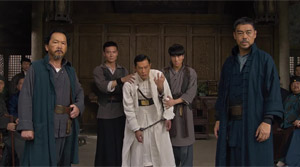 Review: Director Benny Chan is well known for his big budget action flicks like "New Police Story" or "Invisible Target". Movies which don't really have that much depth to them and simply are made as a display of fireworks in the style of Michael Bay. Thus, it's nice to see that "Call of Heroes" has a good amount of wuxia drama in store and storywise centers around what justice means, what price you have to be willing to pay for it and why this is important. Sure, you shouldn't expect any philosophical thoughts, but still a little bit more than what we are normally used to see in a martial arts flick. The movie clearly benefits from its cast, too, even though not in the places you are probably expecting it. 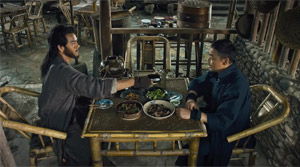 Eye-catching is the very well done set, which at the latest during the finale almost becomes a protagonist of its own in the movie. At least you will start to love the Pucheng set, which took four months to be built, like your own home. This effort concerning the set may have reminded some critics of the good old Shaw-Brothers classics, but there is also as much "The Magnificent Seven" to be found in Benny Chan's picture. The Western orientation isn't just to be pinpointed in the score, but also in the theme of upholding justice in the face of an overwhelming villain. Then again, it needs to be noted that this has always been the theme of wuxia stories as well, and so we come full circle. Next to that there is also a bit of Chinese history put into the mix, at least that's the impression you could get since Warlord Cao Ying is featured in the story. But to be honest that's it with historical accuracy. 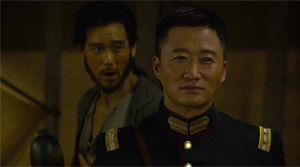 That isn't bothersome, though, since the action is clearly standing in the foreground. And since no one else but Sammo Hung ("The Bodyguard") is responsible for the choreography you won't be disappointed in this regard. There may be a lot of wire-fu, but there are also a few outstanding fights involving tonfas and spears as well as sabres. Lau Ching-wan ("Overheard 3") has last been in front of a camera for a martial arts movie twenty years ago and so you can see his double most of the time, even though he especially trained wielding his weapon of choice, a whip, in a convincing manner. Normally, Lau constantly manages to get more out of a movie acting-wise than what the screenplay provides him with. But in "Call of Heroes" he manages to do so only in a few scenes. Most of the time the story's hero is simply too straightforward. 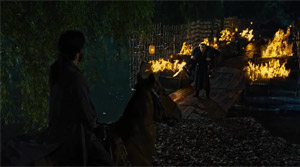 Things look different when it comes to Eddie Peng ("Operation Mekong") since he displays the kind of pecularities and different shades of black and white which make a wuxia hero so interesting in the first place. Therefore, it's no surprise that the little kids in the movie compare him to Sun Wukong, the monkey king. It's fun to watch him do his stuff and moreover he also knows how to do his own action scenes and this in an abolutely convincing fashion. Accordingly, he is the true hero of the story. Moreover, his side story with the underling of Cao Ying's son, played by Wu Jing ("SPL 2: A Time for Consequences"), has a lot more character than the actual heroes. Wu Jing also delivers a convincing performance as he isn't just a villain, but has his very own personal motives and acts accordingly, without simply being a caricature of a bad man. 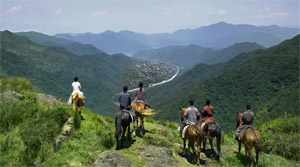 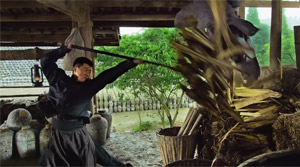 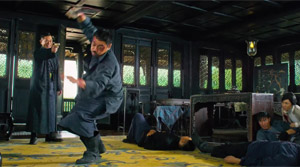 That very caricature is embodied by Louis Koo ("Wild City"). His acting is either quite reserved or he tends to overact. However, his acting isn't really a bother here since he apparently had quite some fun with his role. The multitude of characters, there are also a few supporting characters, make "Call of Heroes" very colorful and apart from that there are also some rather dramatic scenes which in fact manage to touch you. That's exactly what elevates this movie above similar genre entries. We see the sacrifices made for justice and we also see the involved suffering. In the end, Benny Chan's flick is also quite violent after all. A noteworthy showdown gives the movie its final touch. Granted, "Call of Heroes" isn't a polished gem, but Benny Chan brings a kind of mix between wuxia and western story to the big screen in a satisfying manner and also delivers nice action. One of his best movies.