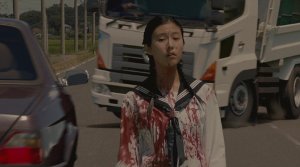 Story: Shinji (Ryuhei Matsuda) is disoriented and has lost his entire memory. His wife Narumi (Masami Nagasawa) thinks he is faking it to distract from the fact that he cheated on her. However, Shinji really seems to be a different person and now he considers Narumi as his "guide" who teaches him about his life and specific concepts. One day, Narumi witnesses how someone tells Shinji about a concept and then he claims it for himself. His counterpart, on the other hand, now has to keep on living without this concept. Therefore, Narumi's sister doesn't know what family means anymore after this concept has been taken from her. Narumi realizes that Shinji doesn't just pretend to be crazy, but that apparently there's some truth in his claim to be an alien.
In the meantime, the journalist Sakurai (Hiroki Hasegawa) tries to find the girl Akira (Yuri Tsunematsu), who has fled from a crime scene. He is approached by the young man Amano (Mahiro Takasugi), who chooses him as his "guide". He introduces himself as an alien who searches for Akira as they are preparing for the invasion of Earth and therefore they want to obtain as many concepts of thinking from the human race as possible. Sakurai is fascinated by Amano and thinks that he can help find Akira. But if Amano, Akira and Shinji manage to get together, Earth's invasion is inevitable... 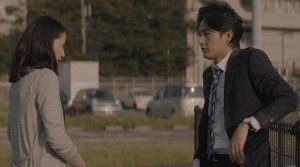 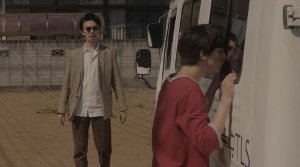 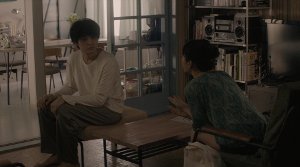 Review: If you expect a gripping thriller from this science fiction movie, you will be surprised to see that this alien invasion is portrayed with a strong focus on philosophical questions. The fact that words imply concepts, to which we assigned certain rules, should be clear. But how would you teach these concepts to another species? In "Before We Vanish", aliens first try to understand the human race, only to then conquer them more easily. An approach, which is far more realistic than the usual city-destroying spaceships. It's refreshing to see humankind through the eyes of another species. However, you soon have to ask yourself, whether the movie wants to be a drama or maybe even a mild comedy. The very unique atmosphere leaves us in front of the screen rather confused. 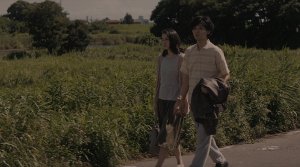 The movie sometimes radiates a specific "end of days" vibe, which makes sense considering the person behind the movie: director Kiyoshi Kurosawa, who created one of the most peculiar and memorable horror movies with "Pulse"; a movie, which almost exclusively lives off its isolating atmosphere. The movie "Creepy" also carried the director's handwriting and it clearly profited from that. In "Before We Vanish", we get the impression that Kurosawa wanted to weave in a more humorous tone, which results in a curious mix. It's not troubling, but the characters all seem a little bit off and you can only assume their behavior is based on the director's humorous approach. But maybe it's just social criticism. 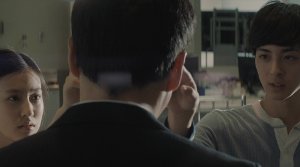 This could explain why the journalist, for instance, still tours around with the alien - and therefore practically prepares the alien invasion with him -, when it is clear that his companion is not a crazy person, but really has some special skills. But there's more: He even would have had the chance to pass on information about the aliens' location or their intentions and goals. Why he didn't do that, is left to our imagination. However, Sakurai, played by Hiroki Hasegawa ("Love and Peace"), is not fleshed out enough as a character for us to attempt giving a well-founded interpretation. While we can understand why Narumi's bond with her alien husband gets stronger and stronger - Narumi doesn't care about the extinction of the human race as long as she has a caring husband at her side -, the journalist's behavior is not as plausible. 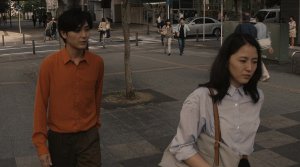 Masami Nagasawa ("I Am a Hero") represents the emotional center of the movie, whereas Shinji, portrayed by Ryuhei Matsuda ("Gohatto"), is responsible for the more humorous elements with his stoic and disorienting manners. But what needs to be mentioned is the fact that the flick constantly fluctuates in its general tone. Every now and then, this can be rather annoying, for instance with the government organization, which wants to do something against the invasion, coming off as just some kind of caricature. The world is about to end and nobody's really doing anything. However, it's not as if the characters have some sort of death wish. Instead, the movie apparently is supposed to be a tragicomedy. The only problem being that even though director Kurosawa manages to portray hopelessness on screen quite nicely, his forte is a weird contrast to those scenes full of hope. 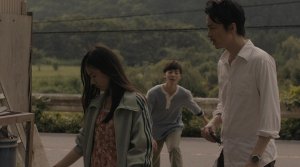 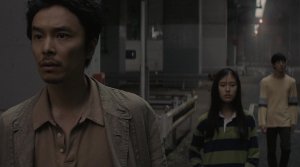 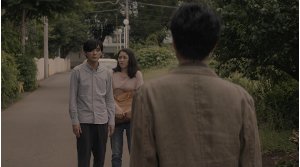 Next to the fact that the characters behave inexplicably passive or resign themselves to their fate, you also have to criticize the movie's pacing. Sometimes, "Before We Vanish" is a little bit too tedious. The plot is not really moving forward. The scenes as such are not at all boring, especially as there are sequences which were filmed in one single shot and the camera moves and turns a lot showing us how much planning was put into this scene. A real highlight. But it is a pity that the movie didn't choose to explore its basic idea a little bit more: What happens to people who are robbed of certain kinds of concepts? Herein lies some untapped potential. Mankind may be missing something valuable if you take away the concept of family, but you can also see people being liberated because they suddenly lack the concept of work or property. Kurosawa's movie constantly alternates between philosophical depth and naivety. During the epilogue, at the latest, the movie - which is based on a play - shows that it could have used a little bit more fine-tuning.