Story: The suicide of Taguchi (Kenji Mizuhashi) is extremely disturbing for his colleagues, among them Michi (Kumiko Aso) and Junko (Kurume Arisaka). Apparently he suffered a depression but no one realized this. Furthermore, the CD Taguchi was working on before his death poses a strange puzzle to Michi as well. On it there is a video in which a man can be seen who could be Taguchi. At the same time student Ryosuke (Haruhiko Kato) goes on the internet for the first time. There he suddenly sees some shots of other people's apartments and the question if he wants to meet a ghost pops up at his screen. Ryosuke can't stand computers anyway and so he wants to forget about this as soon as possible, but his computer constantly connects to the internet via dial-up on his own. Thus, he seeks the help of computer expert Harue (Koyuki) at his university, who soon uncovers some unsettling things. Meanwhile, there have occured more mysterious suicides which are all linked to the videos on the internet and a door framed by red duct tape. Or is it loneliness that causes so many suicide victims after all?

Review: "Pulse" is a horror movie that is difficult to grasp and most of all has to struggle with the fact that it has been exceedingly highly praised. The unusual socio-critical tone and the creepy atmosphere of the movie justify this, but despite all that "Pulse" is still a very slow-paced, dull horror movie even to the point where it becomes outright boring. But if you have managed to engage in the mood of the film it becomes more worthwhile than many of its competitors. That is because the horror works on a more subtle level and toys with man's fear of loneliness. And that's also what's running through the movie from start to finish. So those who expect a typical Japanese horror film may be disappointed. But if you can get along with the very particular nature of "Pulse" you won't forget this movie so soon. 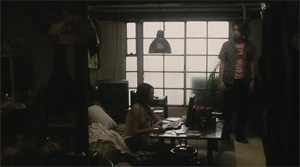 Director Kiyoshi Kurosawa is already known for his quiet pacing in movies like "Cure" or "Retribution". This time he almost takes a step further, though, and makes us virtually participate in the loneliness of the protagonists as we are often watching them how they are solely living everyday life while being isolated from the world. Portraying this Kurosawa approaches the matter with such an incredibly slow pacing that you sometimes have to fight sleepiness. This also stands as the biggest shortcoming of the film. If you didn't get along with the leisurely pace of many Japanese horror movies anyway, then you especially should avoid "Kairo" (that's the commonly used alternative title). At least, there are some horror scenes that can shake you up again. 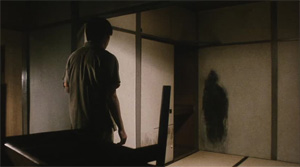 Those said horror scenes are by the way very well composed since shadow and light are used a lot and to very good effect. Actually, you never really see the ghosts right up front, they are merely black shadows, in fact you almost never get to see a face. But especially because you get to see almost nothing, your imagination is occasionally playing tricks on you. The unknown and unseen is after all capable of creating the greatest horror, as there is enough proof of here. Moreover, the dead often solely leave a black spot at the wall. A last image in the face of complete dissolution. Simply seeing that ash stain gives you the chills. However, the music sometimes needs to getting used to since it is dominated by the spheric tunes of a woman's voice a little bit too much.

The movie's story is simultanously told from the perspective of two protagonists and at the end is linked together. Many things remain in limbo and are very abstract. Have the ghosts found access to our world over the internet? So why are people dissolving into nothingness? Where are those deads sent to, if the ghosts have entered our world because theirs is too crowded? There are many questions that remain unanswered, but this interestingly proves to be less frustrating than with many similar works. Many things are supposed to be interpreted by the viewer himself, even the more since "Pulse" has several metaphors in store, be it obvious ones, like the dots on the screen that are erasing one another when getting too close to each other, but are drawn closer together when they drift apart too far, or less clear ones like the doors that are closed with red duct tape. 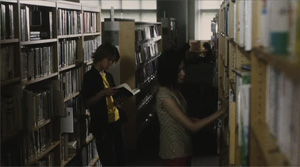 Apparently, meeting a ghost leads to amplifying an innate death wish and slowly sucks the life out of you. Here the criticism on social isolation in Japanese cities (or anywhere else in the world), which is illustrated by connecting to the internet via dial-up (that sound is pure nostalgia...) and is more relevant than ever in times of social networking, becomes even more obvious. People choose their own loneliness and perish because of it. This message works out even better as the events make considerably bigger waves towards the end than expected at first. So those who can live with the slow pacing will find an extraordinary horror film about loneliness in "Pulse".