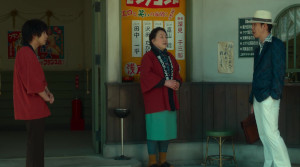 Story: In 1965, Takeshi Kitano (Yuya Yagira), who everyone just calls Take, drops out of college and works in a small theater as a liftboy. The Asakusa France-za, as the theater is called, has seen better days, and at the moment it is mainly through its strip shows that it attracts at least a few visitors. In between shows, the comedian Fukami (Yo Oizumi) always lightens up the mood with his stage program and Take is fascinated by his timing and wit. When Take asks him to train him, Fukami initially refuses, but then decides to teach him a few tap dance steps after all. Fukami eventually sees how much effort the young man puts into getting better, so he lets him join his troupe. In the meantime, Take befriends the stripper Chiharu (Mugi Kadowaki), who actually wanted to be a singer but then had to give up her dreams. Take, on the other hand, still has a firm goal in mind and wants to make it big. However, comedic stage performances are no longer popular, and so the theater struggles with a steadily declining number of visitors. Television has recently become the place where comedians can reach an audience, but Fukami closes his mind to this medium as it insults his understanding of art. At some point, however, Take has to decide whether he stays at his teacher's side and goes down with the theater or sets off for a new path... 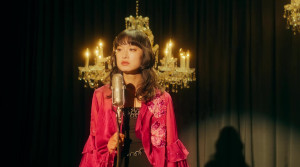 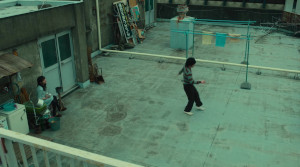 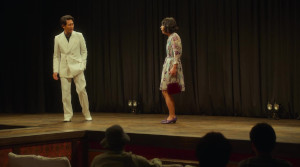 Review: In the West, Takeshi Kitano is mainly known from the "Outrage" series, fans of Asian cinema, on the other hand, got to know Kitano's directing style through drama classics such as "Hana-Bi". Perhaps some people might also remember the Japanese game show "Takeshi's Castle", but in the Western part of the world, only a few people will know that "Beat" Takeshi, which is his stage name, had his big breakthrough as part of a comedy duo. The fact that Netflix produces a movie concentrating on these beginnings is definitely unusual, but also quickly sparked my interest. Nevertheless, "Asakusa Kid" is not the kind of bio-pic you would expect. Because even though Kitano may seem to be the movie's focus, it is actually the relationship with his mentor and the clash of two worlds/generations that carry the movie. On the one hand, this is a positive thing because you get something different from what you would have expected, but on the other hand, you also don't get a movie that completely outlines the life of this exceptional talent. 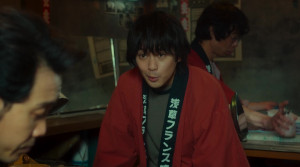 We only get a snippet of Kitano's life during his time at Asakusa France-za, and the inevitable jump into the future then feels as if we had been deprived of several chapters of his life - which obviously is the case. So, we never get to see how Kitano's development into part of a successful comedy duo took place, how he came up with his material or climbed up the ladder. Only his initial problems with the comedy duo are included as some kind of narrative framework. As mentioned before, the movie is therefore not a real bio-pic, even though it is based on Kitano's song "Asakusa Kid" from 1986 and the autobiographical novel of the same title from 1988. Sometimes the movie seems more like a memorial to Kitano's mentor. At least the relationship of the two is clearly put into the spotlight, but Kitano himself initially seems more like a blank page that gets filled by Fukami, even though in the end, he is not entirely reflecting the intended content. 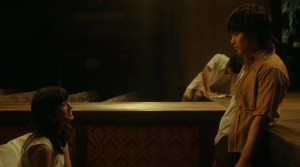 That's because Kitano eventually takes a different path, and he actually has no other choice. The world of the big stage for comedians has shifted to television, and so two worlds collide in the movie. Fukami sees himself as an artist and would never sell out to television. He is a proud man who is not doing well financially, but to the outside world he just shows an enormous amount of dignity and a distinctive humor. Yo Oizumi ("After the Rain") carries the movie with his charisma, and he is the real star here. The tragedy of the character Fukami makes up the movie's soul and watching him stay on a sinking ship until the bitter end gives the flick its special touch of both drama and nostalgia. Then there is the dancer Chiharu, who would have liked to have left long ago, but has given up her dreams somewhere along the way. For her, Takeshi is someone who could do it differently. 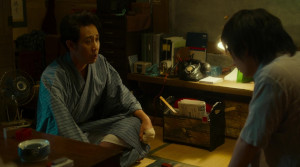 Unfortunately, there are a lot of characters that are only touched upon and that we would have liked to know more about, especially Mari, Fukami's "friend". But that's just the way it is, you have to set priorities and those are clearly with the mentor and his protégé. Takeshi has the strength to make more of himself and also to leave the past behind him, but without being ungrateful. Fukami respects him for that, and he also likes his "disciple", even though he can't always show it. "Asakusa Kid" can be surprisingly dramatic, and on a few occasions, it also walks on thin ice with that. It's not as if scenes become unnecessarily cheesy, but sometimes the movie plays a little too much with the feeling of nostalgia. In addition, there are also a few situations that seem as if they had only been implemented because they are mandatory for the genre. 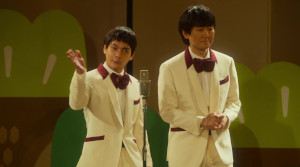 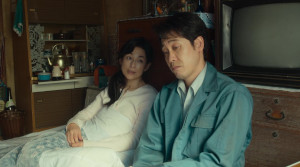 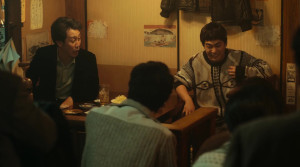 However, the images and the sets are really well-done and even leave room for a little tap dance number (also one of Kitano's skills). Yuya Yagira's ("The Fable") portrayal of Kitano's posture and facial expressions is dead-on, but his role remains a bit flat, because it is only during his time as part of the comedy duo that we can actually see more of his true nature. But at that point, the movie is almost over. That's a real pity. Yet, after the first third of the movie, at the latest, it becomes clear that "Asakusa Kid" is not about the rise of a comedy star, but instead about the special relationship between teacher and student dealing with the conflicting priorities of tradition and comedy, the latter trying to break with the former. The result is a movie which plays with contrasts and therefore causes both laughter and tears. "Asakusa Kid" is a slightly different bio-pic, but it still always finds its way back to the genre. It's a comedic drama that is worth recommending.