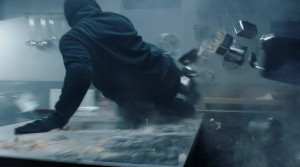 Story: Fable (Junichi Okada) is the best hitman in the country and his reputation precedes him so much that he now caught the attention of two competitive killers who want to eliminate him. Fable has no clue about this, but at least his boss is aware of the fact that Fable has to go into hiding after his last spectacular job. The contract killer therefore goes to Osaka, where he is supposed to lead a normal life as Akira Sato for a year, without attracting attention and, above all, without killing anyone. Together with his assistant Yoko (Fumino Kimura) he tries to live an unspectacular life, while the local yakuza, who are supposed to keep an eye on the two, are struggling with internal problems. The boss's right-hand, Ebihara (Ken Yasuda), is trying to prevent a coup in his own ranks. But when his blood brother Sunagawa (Osamu Mukai) is released from prison and wants to grab a large piece of the yakuza's cake, Ebihara finds himself having an inner conflict. Sunagawa's goal is to set up a prostitution ring, and for that he has chosen Misaki (Mizuki Yamamoto). However, Fable knows the girl, she even helped him to get a job and she also is his colleague now. However, the killer cannot simply solve this problem by force. An endeavor that is made even more difficult by the fact that the two killers, who want to make a name for themselves by taking out Fable, are closing in on him. 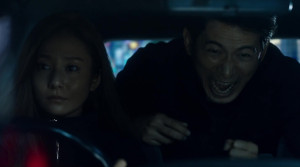 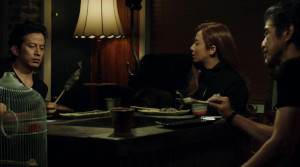 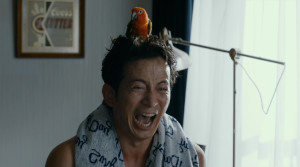 Review: Thanks to Netflix, "The Fable" also has an international audience, and it was one of those movies that I chose out of sheer laziness, watching without knowing anything about it. I had no idea that it was a movie adaptation of a popular manga series by Katsuhisa Minami, but the humor could have been a small hint. By the way, the flick's humor is a double-edged sword, but I will get to that in more detail later on. For the moment, it has to be mentioned that the first action sequence - definitely an homage to classic chanbara movies, just with firearms instead of a sword - is extremely gripping and it is also not stingy when it comes to violence. The choreography is outstanding, the movements are smooth, and the rhythm is perfectly timed. As an action fan, you feel right at home here. 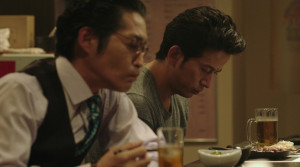 However, it becomes clear that the story has to adapt a calmer tone until the movie's finale sets in. Fable's background story is by no means anything new, and the plot around the Yakuza in Osaka dealing with their power struggle has already been done long before "Outrage" or similar genre representatives as well. Still, the story is mostly about Fable, who has to try to get by in a world where he can't really navigate. But he is too much of a professional for that to bother him. He simply keeps adapting, even though everyone who gets to know him believes that he is at least a bit odd. A good example for that is his eating habits. Fable just eats everything, and mostly with the original skin or shell too. This is due to the fact that as a child he had survival training and had to make do with eating insects and other things nature has to offer. Even though a few small flashbacks to his childhood give the character a little more color, in general they only provide some humorous elements. 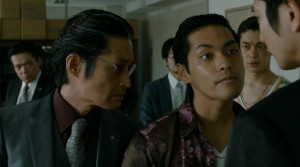 The humor itself is a good counterbalance to the slightly more violent scenes, but it comes off too extreme. While some slapstick moments might be all well and good, director Kan Eguchi brings original manga elements into a live-action movie adaptation, which simply doesn't work. Leading actor Junichi Okada deserves praise for playing the most absurd scenes with a wooden face, but only a few attempts to bring humor into the movie are actually successful. But maybe this kind of slapstick simply doesn't appeal to me. After all, it's not as disturbing as I had feared after watching the first scenes of that nature, and those moments don't completely destroy the movie either. The characters themselves are interesting, and Ebihara in particular is a more complex person than you would expect. But at some point, you also get the feeling that the story falls short of another detail or two. But maybe this is simply a fundamental problem with movie adaptations of multi-volumed manga. 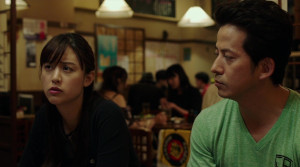 Fortunately, the plotline with Misaki doesn't turn into a love story, but you don't exactly know what purpose Yoko serves for example, apart from the fact that she brings some life into the movie. Since - in between the movie's carnage in the beginning and during its showdown - "The Fable" mainly works on a character level, it unfortunately also drags on sometimes. Moreover, the exaggerated acting enforced by the humor occasionally takes away some of the characters' credibility. That's a pity because the movie is actually fun just because of its unusual characters. It is also a bit strange that starting from its humorous middle part, the flick turns a little darker towards its end dealing with topics like honor and loyalty. Unfortunately, the mixture of slapstick and violent scenes does not work as well as it was probably intended. 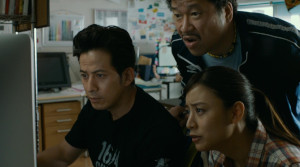 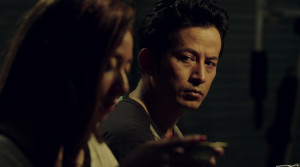 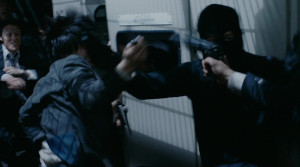 But then again, the finale manages to show off some great pacing and nice choreography. And since Fable had to promise not to kill anyone, he also has to take a more innovative approach in the showdown. Even though the finale is completely convincing - not least because of the fact that the hitman is not allowed to simply fire headshots as he did before -, I still could not help but mourn after the movie's rougher opening scene. The ending lacks a little bit of Fable's rigidity. On the other hand, you actually cannot expect anything else but to get a reformed "hero" at the end. "The Fable" merely follows genre conventions, just as it takes a lot of other well-known aspects and mixes them together, but without getting boring. If it weren't for the humor that was laid on a bit too thick, you could easily recommend this action comedy. After all, "The Fable" is certainly an entertaining movie.