Along With the Gods: The Two Worlds 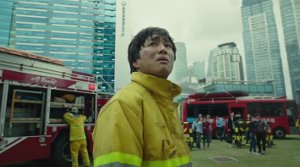 Story: Ja-hong (Cha Tae-hyun) is a firefighter and dies in the line of duty. At first being confused he eventually realizes that the guardians Kang-rim (Ha Jung-woo), Hewonmak (Joo Ji-hoon) and Deok-choon (Kim Hyang-gi) want to lead him through the afterlife. Being a paragon he has the chance to be reincarnated if he puts the trials of the seven hells behind him within 49 days. Ja-hong's three guardians are very anxious to help him since they also get the chance of a new life if they can present enough reincarnations. But Ja-hong seems to be desinterested in general and undermines the guardians' attempts to defend him during the several trials. However, when he learns that he is allowed to see his mother in her dream one more time before being reincarnated he plays along since there is something very important he needs to tell her. Unfortunately, time has suddenly sped up in the afterlife and the group is constantly attacked by demons. Normally, this only happens when one of the deceased's relatives has become a vengeful ghost. Kang-rim enters the world of the living in order to investigate. He finds out that Ja-hong's brother Soo-hong (Kim Dong-wook) died. But the exact circumstances are still a mystery to him. 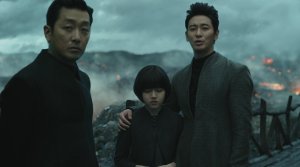 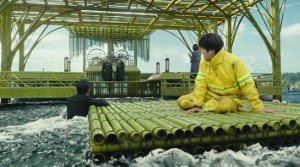 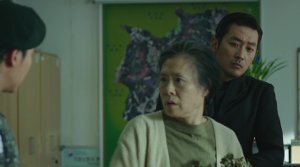 Review: "Along With the Gods" was tremendously successful at the box office and only a few minutes into the movie you realize why. You get a film for the whole family. This fantasy adventure flick offers just the kind of tearjerking drama Korea loves so much. Towards the end this may go a bit overboard, but since we are prepared for this the whole movie along it's easy to overlook it. In other regards there are a few flaws as well, which make the big success of the picture seem a bit unjustified. But the fun factor still remains high despite a convoluted screenplay and the pacing problems resulting from it. The star-studded cast manages to deliver a good mixture of humor, drama and action, too. However, what's best about the movie is that we in fact get a fantasy flick in which demons, a hell of ice etc. aren't just fantasy nonsense, since hell stands as a good groundwork for the fantastic ideas of the screenplay. 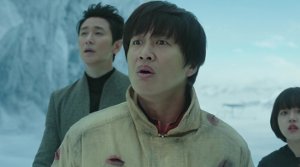 The movie's story is based on a webcomic by Joo Ho-min and comes across as rather simple at first. But the constant implementation of twists and sudden revelations of new facts as well as a subplot in the world of the living make the plot derail at some point und you start to realize that the director doesn't have a close grip on the reins. With its running time of almost 140 minutes the picture is simply too long as well. There were enough possibilities to cut the movie shorter, but despite his experience director Kim Yong-hwa ("200 Pounds Beauty") apparently didn't know where to start. Yet, it's obvious which direction the movie wants to head into. Granted, there may be a twist that turns out to be particularly shocking, but that's just like putting obstacles in the Happy Ending's way. Just the way you would expect from a movie for the whole family. A little bit more guts wouldn't have hurt, though. 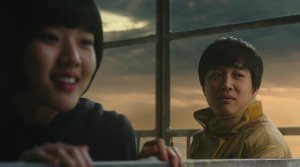 "Along with the Gods" tries to work some profound themes into its story, at least that's what we believe, but you are left behind disappointed at the surface of what the movie could have been. That's a shame since the ideas integrated accentuate a different approach from what especially western audiences are accustomed to. After all, the last level of hell is that of impiety towards your parents and is thus deep-seated in Confucianism. Those references and the fundament in Buddhism including themes like karma and reincarnation are interwoven with elements from Dante's "Divine Comedy" and that's without a doubt fascinating. However, the picture never gets profound. Apart from that the numerous twists manage to keep the different levels of hell from becoming boring. After all, the risk of unneeded repetition was quite high. Accordingly, it's also comprehensible why the story has been spiced up by a vengeful ghost. 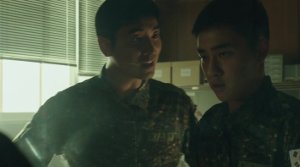 As a fantasy flick "Along with the Gods" really knows how to score. The sets are inventive and nice to look at, even though the film clearly has been shot in front of a green screen most of the time. The slightly artificial look of the CGI fits hell pretty well, though, since no one really knows hows it looks like in reality. Still, as soon as the effects interact with the actors or are implemented into reality it becomes apparent that they could have been carried out better. Director Kim was clearly overambitious and can't adapt all of his ideas appealingly enough. His picture still looks epic, though, and some scenes remind you of a well-animated video game. Ha Jung-woo ("Tunnel") as an angel of death doesn't just manage to deliver the most distinguished performance thanks to his suaveness, but alongside Joo Ji-hoon ("Confession") is also allowed to deliver a few short fights against demons. Watching Ha warping through the air with a blade in his hand makes the question pop up if maybe director Kim didn't play a little bit too much "Final Fantasy XV"... 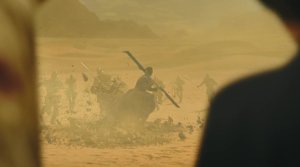 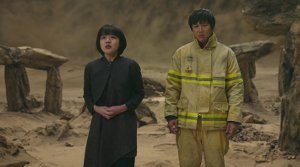 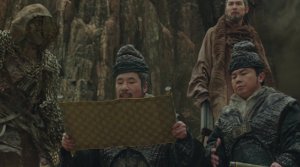 The movie's value is added to the most by its supporting actors. Kim Hyang-gi ("Thread of Lies") scores next to Oh Dal-soo and Im Won-hee ("The Advocate") and several other actors as gods of the netherworld, led by Lee Jung-jae ("New World"). Cha Tae-hyun ("The Grand Heist") on the other hand simply plays the same role as always. The finale gets a bit too teary, here the string-heavy score is a particularly bothersome element, but all in all this is what we expected and it's quite effective, too. A movie about family and forgiveness which is very ambitious, but ultimately fails to work with its motives on a profound level. A sequel has been planned from the very beginning and maybe that's where some of the unnecessary insertions like that about Kang-rim's past are explored in more detail. Sadly not the masterpiece it could have been, "Along with the Gods" still makes up for some neat entertainment.