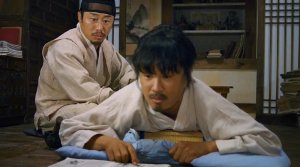 Story: During Choseon dynasty the royal family has the distribution rights for ice, which people are in strong need of during hot summer days. But nobleman Jo Myung-soo (Nam Kyung-eup) devises a plan to privatize the ice distribution and get rich. First, he needs to get rid of a nobleman who stands in his way. Thus, under false pretenses, he puts the man's illegitimate son, Lee Deok-moo (Cha Tae-hyun), who owns a book store, in jail. Moreover, he also sees to it that Baek Dong-soo (Oh Ji-ho), who is responsible for the extraction of ice, falls from grace. The plan works out and Jo has the exclusive rights to the distribution of ice. But Deok-moo seeks revenge and apart from Baek also gets a handful of professional thieves on board, among them bomb expert Seok (Shin Jung-geun) and mining expert Hong (Ko Chang-seok). His plan is to dig a tunnel under the palace and steal tons and tons of ice from the storage halls. That way they could blackmail Jo and get his notebook in which he has listed all the illegal privileges he gave his loyal followers. However, the plan constantly needs adjustments since the undertaking is everything but easy to pull off. 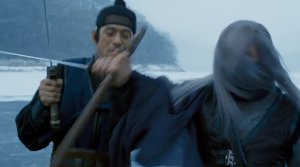 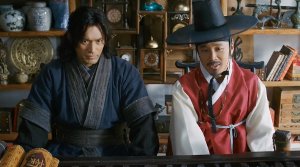 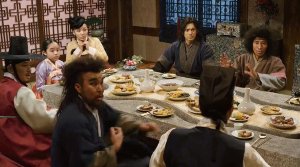 Review: Korea has already attempted to jump on the bandwagon of flicks like "Ocean's Eleven" several times before. The same year as "The Thieves" there was also "The Grand Heist" hitting the screens. A movie that shifts the classic heist story to the Choseon dynasty. The result is an action comedy that is clearly geared to modern movies and therefore often creates the impression of the actors merely dressing up and telling the same old story in a different setting. Yes, what actually could have been an original adaptation of a well-known story simply comes off uninspired in the end. It also hurts the film a lot that the humor is aimed at pleasing an audience that is somewhere around the age when you hit puberty. 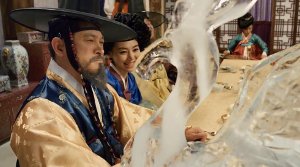 The introduction is already dragging on and on. After more than half an hour the movie eventually begins and you ask yourself what purpose the introduction actually served. Because only after that the actual supporting characters are introduced and the protagonists themselves certainly didn't benefit from the extra time they got in the beginning. The characters prove to be extremely shallow. Cha Tae-hyun ("Slow Video") doesn't deliver a noteworthy performance and merely put emphasis on getting across likable. Oh Ji-ho ("Sector 7") doesn't manage to appear more three-dimensional either, yet succeeds in boasting with a few nice fights. To some extent the supporting cast has interesting personalities to offer, but maybe that's only our impression since we assume there to be more profound character traits beneath the surface and we are willing to forgive the director that he wasn't able to dive deep into every single one of them. 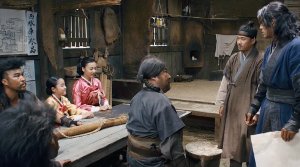 However, if you are honest the supporting characters are also merely sad clichés. Especially Min Hyo-rin ("Twenty") as a diver constantly seems spacy and out of her depth. She is merely supposed to be some eye candy, I suppose. The several love interests are also quite unnecessary and are mainly there to give the low-level jokes more room. And "The Grand Heist" has a lot of them. Sometimes the humor is tailored to 10-year olds, that's at least the impression you get. For instance concerning the mining guy who struggles with flatulence. The movie aims at entertaining the whole familiy and leave everyone in a good mood, but adults won't even crack a smile. At least there is always something happening on screen, so things never become boring, right? Well, if you have seen one or two films of the genre before you won't really get any additional value from this one and this is even though the flick takes place during the Choseon dynasty. That's a shame, since it is the only maybe somewhat interesting thing in the movie. 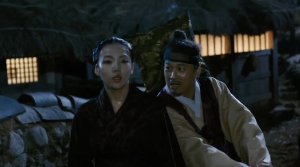 Furthermore, the story is unnecessarily convoluted and entangled. Numerous characters belonging to one party or another are ought to bring some complexity to the story. But this can't be achieved for the fact alone that the characters are uninteresting and everything but well drawn. Apart from that the plot stumbles forward in an incoherent fashion. Oftentimes, the editing simply isn't done well either and while the focus may have been on one thing just now and we asked ourselves how the story's heroes will solve the problem at hand, the next moment the solution is just tackled casually while the focus has suddenly shifted to something completely different. The flawed editing often raises a lot of questions, too, and there are all in all too many rough edges which should have been rounded off. 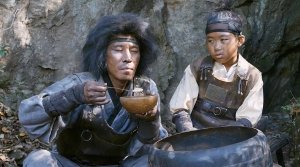 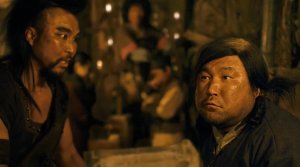 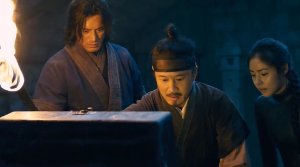 The odd tone which desperately wants to spread some good mood is also reflected in the score which sometimes reminds you of a Western, but then accompanies the events in a very modern way with drums and a guitar just to feature a traditional drum piece during another scene when two fighters fly over the rooftops of the Royal City - a cheap homage to "Crouching Tiger, Hidden Dragon". And while at first there might have been a few dark moments, everything gets more and more lighthearted towards the end and the slapstick humor even slips into the action sequences. Naturally, director Kim Joo-ho can't refrain from adding another scene and yet another one after each presumably last scene in his debut work with the intention of spreading some more good mood. By now I'm simply tired of such shallow attempts of being entertaining - despite the flick being a respectable production otherwise - thus I clearly can't give a recommendation.