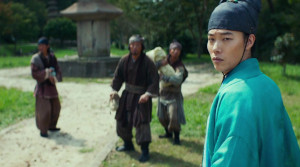 Story: On Earth, humans are unknowingly used as prisons for extra-terrestrial criminals. Normally, the trapped beings are not supposed to have any control over the human bodies and are only passengers, but sometimes things go wrong, and the aliens take over control. In cases like that, the robot Guard (Kim Woo-bin) and his helper Thunder stayed on earth. Thanks to a special object that looks like a knife, they can even travel through time. When they eliminate one of the aliens in the year 1380, they also kill the mother of a small baby in the process. They take the baby with them into the year 2012, and thanks to having a daughter now, Guard can live among humans without being conspicuous. Ten years later, however, little Yian (Choi Yoo-ri) is already quite clever and has discovered her father's secret identity. Shortly afterwards, a robot comes to earth in order to free a particularly dangerous alien.
In the meantime, the Daoist Moo-reuk (Ryu Jun-yeol) dabbles in being a bounty hunter during the Goryeo dynasty. There is a particularly respectable sum of money out on procuring an artifact called the "Divine Blade". Moo-reuk almost has the object in his hands when suddenly an unknown woman (Kim Tae-ri) appears, who seems to be from the future and also wants the blade. Still, there is a much more dangerous faction eager to get the blade, led by a man who is actually an alien. 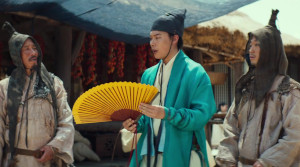 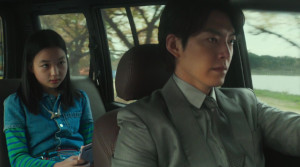 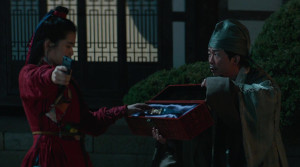 Review: It's hard to say whether "Alienoid" actually knows what it wants to be as a movie. Preferably everything all at once, and so the mixture of science fiction flick and fantasy could not possibly work on paper. The fact that the movie takes place in two parallel timelines is also rather unpromising in terms of making the flick seem like a coherent whole. And yet, "Alienoid" is entertaining in a way that, while clearly on a popcorn level, isn't quite as flat and hackneyed as, let's say, some of the recent Marvel movies. Various genre clichés are used, and the mixture of certain elements seems more than arbitrary, but since the focus is mostly on the characters and some of the supporting characters even manage to get a surprisingly good deal out of their roles, the movie doesn't feel as insignificant as you would expect at first. Despite its weaknesses, you have to admit that the movie manages to surprise in a positive way with its high level of quality. 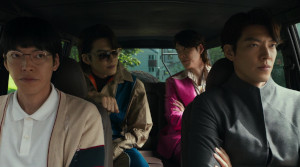 For example, I initially thought it would be a big issue that the story takes place on two timelines. It is not rare that movies switch back and forth between two storylines at a breakneck pace, with the result being that you ultimately don't feel drawn into either of the worlds. This sci-fi/fantasy genre mix, however, takes the time to stay with a timeline for a little while longer and lets the events develop at their own pace. This is a very pleasant thing, because this way, we can warm up to the characters more easily. In addition, a certain tension is created by the question, what the connection to the other timeline might be. Still, we know right from the start that time travel is possible, and that there are aliens existing in the Middle Ages. Nevertheless, it remains a mystery what kind of connection there is between the heroes of the respective eras, but we actually get the resolution for that in the end, as well as a cliffhanger leading to the sequel. 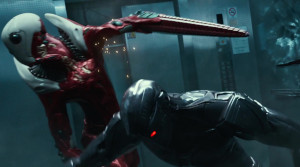 The "Divine Blade" is proof of how arbitrarily some things were thrown together here. Because this alien artifact has all kinds of different functions, and it also happens to allow you to time travel for some reason. Thankfully, the movie did not overdo this aspect and stuck to just two timelines. Otherwise, the events would have become pretty chaotic. Anyway, we quickly learn not to question some circumstances anymore, such as the fact that the Daoist, who hires himself out as a bounty hunter, is a master of magic, which is also taken to extremes by two wandering magicians who sell magical items, whereas it is apparently no longer possible to do magic in the present. At some point, it's more fun to just let yourself be sucked into these two different worlds instead of asking questions, especially since you get the feeling that the movie doesn't take itself too seriously and simply wants to entertain us with its unusual mix in a somewhat strange or maybe even original way. 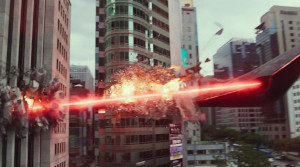 However, as mentioned before, the individual pieces are very familiar. When you then get to see a spaceship flying through the city blowing up entire skyscrapers with its laser, you might think you are in a Hollywood blockbuster, especially since the special effects are actually pretty well-done and show off the flick's big budget. Thanks to the charismatic characters, though, the focus is not only on effect-driven pompous scenes, but instead the movie gets a proper foundation on which the aimless story can build. Of course, Kim Woo-bin ("The Con Artists") seems a bit stiff as a robot, but his somewhat more cheerful colleague or rather the car I should say, which is able to change its appearance at will, allows Kim to go out of himself as a doppelganger in a few scenes. Nevertheless, the parts in the Goryeo dynasty are a little more cheerful, and even though you can also have fun with the sci-fi parts, the story there seems more down-to-earth and emotional. Surely this is also due to Ryu Jun-yeol ("Money"), who radiates quite some charisma and brings a pleasant kind of humor into the story. 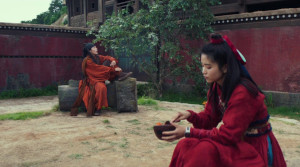 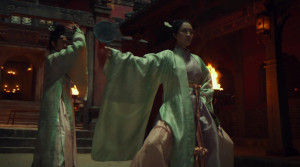 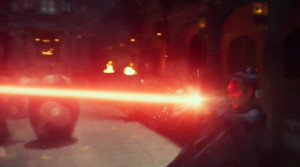 In addition, we also get a few nice gimmicks in the Goryeo period, such as two companions, who are actually cats from a fan, hand movements with which you can simply wipe people aside, or mirrors that can magnify objects a hundredfold when you send them through. While all this is really absurd, it is made easy to digest by characters like the magician duo - Yum Jung-ah ("Cart") plays the female part - who portray all this with so much vigor and lovable weirdness that you just have to enjoy it. A lot of the things in this movie are so random, and the story is so full of coincidences that the flick should actually be a disaster. But director Choi Dong-hoon ("Assassination") skillfully maneuvers through the obvious pitfalls of his essentially ridiculous screenplay and with the help of some good acting performances he delivers a blockbuster which shows off its absurdity with refreshing self-confidence and always manages to find the right pacing.