A Home With a View 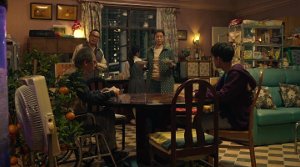 Story: Wai-man (Francis Ng) put all his money into an apartment, which he has to pay off for another twenty years. He and his family cut corners whenever they can in order to make ends meet. His wife Suk-yin (Anita Yuen) takes a pass on a holiday with her friends, his daughter (Jocelyn Choi) makes her own make-up out of vegetables and his son (Ng Siu-hin) has to go without the latest smartphone. Wai-man's wheelchair-bound dad (Cheung Tat-ming) also lives with the family, so its very cramped in the apartment and there is a lot of fighting going on, not least because the family's neighbors drive them crazy. There is the butcher who chops pork every day, or the old man living downstairs, who always smokes at an open window polluting the air. But whenever it gets too much for the family in the somewhat shabby apartment, they look out their window. Because between the street canyons they have a nice view of the sea. When the only positive thing in their lives is suddenly blocked by a billboard, the family cannot believe their own eyes. The neighbor on the other side, Wong Siu-choi (Louis Koo), has placed the billboard on his roof and is unwilling to take it down. But because the neighbor doesn't seem to have a permit for it, Wai-man is sure that they can do something about it. Nevertheless, the administrative barriers and loopholes Wong uses eventually bring the family to the verge of madness. 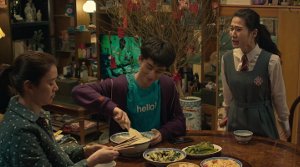 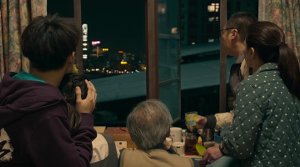 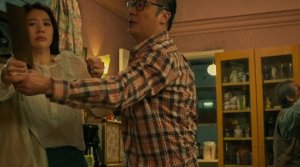 Review: In big cities rents are becoming less and less affordable. This should not be news to anybody, especially not when it comes to Hong Kong with its population of almost 7.4 million. To get an acceptable apartment is a small miracle and "acceptable" means that there is at least a window. "A Home With a View" uses this premise and pushes it to an extreme. We've already seen that in the violent thriller "Dream Home", but in "A Home With a View" the tone is a little lighter. However, viewers who expect a comedy will be thrown off course by some macabre scenes and decisions, because Herman Yau's latest movie is a black comedy. The problem is that this only becomes clear towards the end. Before that, we get a lot of slapstick and family chaos. Viewers who can't handle the sudden change in tone will have their problems with the movie. 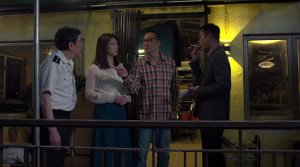 Since the comedy revolves around the problems of Hong Kong residents, and because it sometimes has quite an over-the-top style and the culturally different sense of humor might not work for an audience abroad, it is pretty surprising that the movie has found its way onto Netflix. I certainly don't want to complain, but the way the streaming service choses which movie will be part of its program is quite strange. But if you can handle the movies humor - and it is not as weird as it might have sounded by now - you will quickly be drawn into the story. This is also due to the fact that there are some scenes that were actually shot in one sequence and therefore remind us of a stage play. This is no coincidence, because the comedy is actually based on a stage play by Cheung Tat-ming, who now plays the grandfather in the movie. The fast-paced dynamic of the movie thus never lets things get boring. 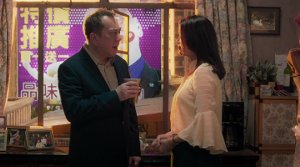 The movie is also well cast. Francis Ng ("Two Thumbs Up") as the father has no particularly striking traits, but convinces as someone who usually endures a lot of crap, until it finally becomes too much for him. Actually, even then the father is not really ready to do anything extreme, but together with the rest of the family, the willingness to do something about the suffering of the whole family seems to grow. The problems are caused by Wong, who is portrayed by Louis Koo ("Line Walker 2"). A man who takes advantage of the fact that Hong Kongs laws about billboards are a bit peculiar. At least, you can get the impression that bureaucracy in this city can be as nonsensical as it is in Germany. Of course, the movie makes fun of that, but we also quickly realize that "A Home With a View" wants to convey some social criticism this way as well. 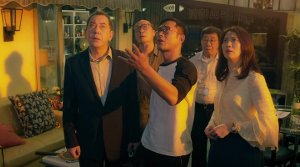 Anita Yuen ("Integrity") sometimes manages to push herself to the fore and appears natural in her role alongside Francis Ng, while playing a more extroverted role than her co-partner. The fact that this extroversion could also turn into slapstick can be seen with the two child actors, who simply play their roles in a manner which is too cliché. The son, for instance, is a wannabe musician and tries to somehow gain a foothold through social media. The majority of the time, the movie takes place in the apartment which once more underlines its theater roots. But what might work on stage doesnt necessarily have to work on screen. The chaos created does not always seem believable, the characters often come across as stereotypes and the actors literally talk without pausing for breath. A little less would have been more here. 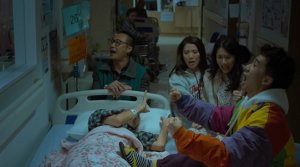 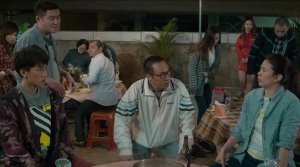 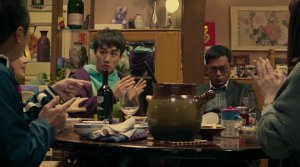 For a socially critical movie, the criticism is also spelled out too obviously. That way, everything stays pretty much at the surface and you can basically turn off your brain. With about 90 minutes of running time, director Herman Yau ("Shock Wave") packed his movie rather tightly. That keeps the pacing up, but it also makes the black comedy a little too easy to digest. There are no gaps for the viewers to fill. Everything moves along very quickly and that becomes a problem, especially towards the end when the comedy gets a little more morbid. We are always told that the family is slowly going mad, but we actually dont see any of it. Thats why the finale is also quite unbelievable and could even catch you off guard. It would have been nicer if "A Home With a View" had shown us right from the beginning that it is supposed to be a black comedy, instead of awkwardly forcing this fact upon us towards the end. Nevertheless, whats left is at least a comedy which manages to entertain most of the time.