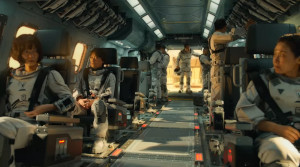 Story: In the not too distant future, there is virtually no water left on planet Earth. The little amount of drinking water that still exists is rationed and distributed according to social status. The drinking water shortage even becomes such a big problem that a team of scientists and soldiers is sent to an abandoned lunar station from which they are supposed to retrieve an important sample. The station was closed five years ago after an accident occurred there. What it exactly was that happened, was kept under wraps, but officially, radioactive material is said to have leaked. Biologist Song Ji-an (Bae Doona) is supposed to join the mission, and she immediately agrees to do so, as her sister was one of the people who died on the lunar station. She hopes to find answers about her sister's death there. The mission, led by Captain Han (Gong Yoo), already starts under exceptionally adverse conditions. The space shuttle crashes on the moon and the group has to walk to the station. When they finally get there, it turns out that there actually was no radioactive accident. Instead, the team finds a corpse that shows signs of drowning. Ji-an thinks that the accident from five years ago should be investigated so that they could understand the dangers that they might face in the station, but Captain Han simply wants to complete the mission and find the sample. Little do they know that both tasks are connected. 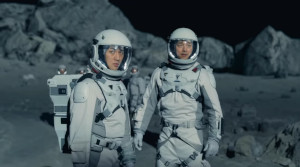 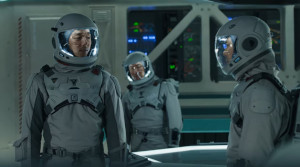 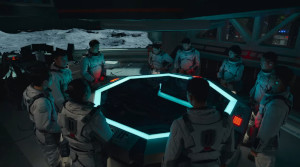 Review: "The Silent Sea" is an extremely ambitious science fiction series. When it comes to visuals and atmosphere, it raises the bar for shows to a whole new level, and by that I not only mean for Korean, but for international standards too. Nevertheless, there are also some critical voices saying that the series is a bit long-winded. And it's actually true that "The Silent Sea" would probably have done better if, instead of eight, it had been condensed to maybe just six episodes. Unlike with other forays into sci-fi that Netflix tried, such as "Another Life", I didn't immediately lose interest, though, even if the first episode actually makes it a bit hard to find your way into the world. The episode introduces and explains the most important things, but it still lacks the fantastic sets of the moon station, so the developments feel a bit slow. And to be honest, sci-fi fans won't really discover anything new story-wise either. But a number of stolen ideas get mixed together quite nicely. 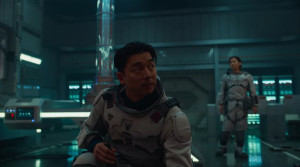 It probably stands to reason to focus on the moon as a setting for this review first. You really get the feeling of walking on another celestial body, everything seems bleak, and yet somehow dreamy, otherworldly as well as familiar. The work the show-makers put into the right kind of lighting really pays off. Especially in the last episode, the moon seems almost fairytale-like, although there is still a feeling of loneliness and solitude as soon as you see the earth in the distance. From the second episode onwards, however, the moon station is the focus, and the dark corridors and the flashlight beams give everything a scary touch. This horror atmosphere gets even more intense when - how else could it be - it turns out that the team is probably not alone there. In addition, we get ventilation shafts that people have to crawl through, and doors that do not open (yet) but behind which lie the answer to the question of what happened on this research station. 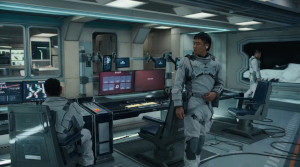 If the numerous allusions to sci-fi horror classics are not enough for you already, you even get the motion tracker from the "Alien" universe, and once more it sends cold shivers up and down your spine when a point closes in on you at lightning speed, but there seems to be nobody/nothing in the corridors. All this may give the impression that "The Silent Sea" is a horror series, but that's not the case. There are some scary moments from time to time, but the horror is rather impalpable. Some kind of virus or something like that seems to have killed the workers of the research lab. Water, as the main motif, also plays a major role here. If there's one thing that "The Silent Sea" does brilliantly, it's building up suspense with its atmosphere and the mystery around the research station. As soon as the power is back on, the slightly futuristic, light-flooded and somewhat sterile rooms also add to the impression that there probably was some kind of experimenting going on during which something had gone terribly wrong. 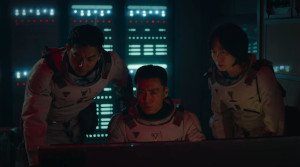 But that brings us to the weaknesses of the series. While we do get a few answers as we go along, some things remain quite implausible, and genre clichés are made use of more than once. So, of course, there is a traitor within the group, but unfortunately, we never get to know more about the organization the guy works for. As far as characters go, you are pretty much left in the dark too. Bae Doo-na's ("A Girl at my Door", "Sense8") storyline with her sister never actually manages to get momentum emotionally, and her inner struggle about the fact that her beloved sister might have conducted unethical experiments was also not implemented gracefully. Bae does her best, and you can certainly relate to her, but generally, the characters remain flat. This is especially true for Gong Yoo ("Train to Busan") playing a military man with a black and white way of thinking while his slight character development is not working as well as it was probably intended. The flashbacks to his daughter are not helping either. 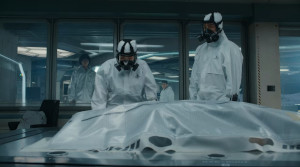 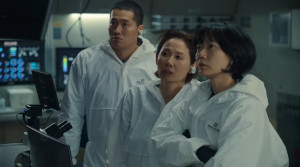 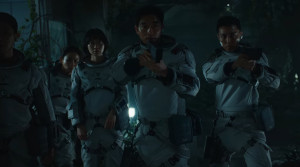 Director Choi Hang-yong managed to bring his own critically acclaimed short film from 2014 to the screen in a visually pretty impressive way. Particularly the special effects and sets are outstanding. Unfortunately, the story drags on unnecessarily, and there are plot holes at every corner. If you only weigh one-sixth of your normal body weight due to the low gravitational force on the moon, why do the characters have such a hard time pulling themselves up somewhere? The walks on the moon with its unusual gravity do not look all that convincing either. And how does the mysterious substance in this series manage to reproduce so much without a suitable energy supply? The series still owes the viewers some answers, that's why you get the impression that it is aiming for a second season. In terms of atmosphere, "The Silent Sea" has some almost enchanting moments, but sci-fi connoisseurs will only get the well-known here. The series should have put more emphasis on a logical and continually unfolding story, and the characters would have deserved more depth too. Nevertheless, I can't help but recommend the series to genre fans because they will immediately feel at home. And since "The Silent Sea" is so international in tone, you don't even have to worry about any culture shock.