You're Not Normal, Either 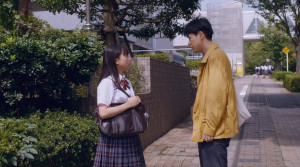 Story: Kasumi Akimoto (Kaya Kiyohara) still goes to school and thinks that her friends are boring. She is in love with the businessman Miyamoto (Kotaro Koizumi), who has redefined learning by including toys. At the moment, he is doing some readings, and during one of these, Kasumi finds out that he is getting married soon. She tells her tutor Yasuomi Ono (Ryo Narita) about it, who then wants to know what exactly it is that she finds so great about this man. Her tutor continually asks Kasumi very directly about things, so that she finally has to tell him that he is not quite normal, and that's why he will never get married. Yasuomi then asks the girl to help him become a little more normal, because he thinks her criticism is justified and he wants to get married and lead a normal life at some point. Yasuomi's problems start with the fact that he has devoted his life exclusively to mathematics, and other than that he hardly understands anything about everyday life. Kasumi wants him to practice how to date, and she already has a plan. He is supposed to meet her crush Miyamoto's future wife, Minako (Rika Izumi), and then steal her away from her fiancé. With that, Kasumi would eliminate her own competitor as well. However, her tutor is so awkward when it comes to everyday life, especially when social interaction is involved, that she constantly has to adjust her plan. At some point, Kasumi and Yasuomi finally succeed with their project, but then the girl is not at all happy with the outcome... 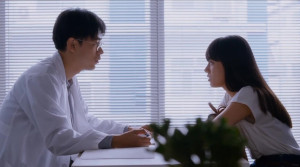 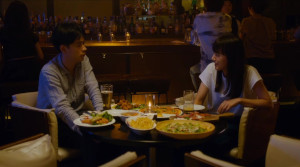 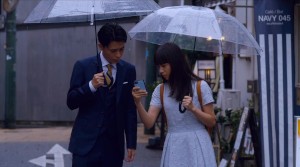 Review: It's pretty often you find movies that look good on paper but turn out to be a disaster on screen. With "You're Not Normal, Either" it's actually the other way around for a change! What may sound like a stereotypical romantic comedy - and will probably not be able to appeal to those viewers who may find the tutor-student romance theme problematic -, actually turns out to be a well-done comedy in which clichés are only used in order to be deconstructed and made fun of afterwards. So of course, Yasuomi is supposed to realize at the end that Kasumi is actually a nice fit for him, while she, too, starts to realize this with horror as she is executing her plan. But surprisingly, the tutor and Minako are also a nice match, and Yasuomi's honesty paves the way for an interesting relationship as we find out a lot more about the mathematician here. Of course, there is a lot of room for humor too. 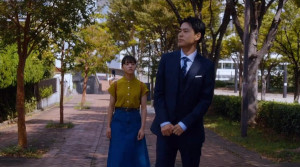 It is especially pleasant to see that Yasuomi is not your typical "nerd" who is completely oblivious to the mistakes he makes while interacting with people. Of course, especially in his dialogues with his student, it becomes clear that, from time to time, you have to point out to him that you can't just say this or that directly to people's faces, but he doesn't fall completely into the category of an unworldly mathematics expert either. He wants to lead a normal life, and naturally the core message of the movie is: What does being normal actually mean? The movie touches on norms that are probably more Japanese, but most of the time, the comedy proves to be quite international. How important reputation is for society and how it directly correlates to the extent of its factitiousness, are really cross-border topics, even if it is obvious that the director wants to address problems typical of Japan here. Despite the small dose of social criticism, the movie always stays funny - even in those scenes that should perhaps not be funny because they show social wrongs a little too honestly. 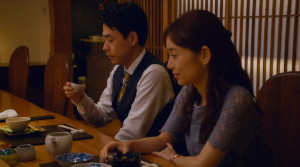 Yasuomi is not your run-of-the-mill nerd you know from movies and television, and that is because he also represents some cultural peculiarities or rather has to find his bearings in Japanese society, in which you simply have to be married if you get to a certain age. The romance with the student - there are not that many years between the two - mainly works because Kasumi does not simply crush on her teacher, she is a self-confident, sometimes cheeky girl who takes Yasuomi under her wing. So, we get a teacher-student role-reversal, while the humorous scenes are mainly caused by the fact that Kasumi is not that normal either, but doesn't realize it at first. Even though she should already have a hunch, because she does not like her friends' superficial gossip. Together, Yasuomi and Kasumi grow as characters and so does their relationship. But director Koji Maeda never makes the mistake of building the relationship like a classical romance story, and that's what makes the movie so successful. 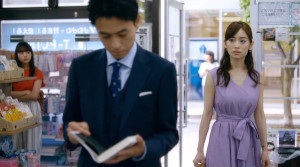 The movie deserves special praise for its dialogues. They are excellently written and give the story a little depth as well as some good humor. They seem authentic and at the same time as if they were conversations of two people living in their own little world. The timing with which the dialogues are presented is also remarkable. Ryo Narita ("Homunculus") and Kaya Kiyohara ("My Tomorrow, Your Yesterday") do an excellent job, which one scene proves in particular, a long continuous shot in which the two characters really shine. The chemistry between the two is simply working, and you always wonder who exactly is learning from whom. Minako is an interesting third person, even though you cannot call the situation depicted a love triangle in the classical sense. You even find yourself rooting for Yasuomi and Minako, even though you should be siding with Kasumi and her teacher. The movie's developments as well as its character drawings are very nuanced, so that the story actually consistently gets a new orientation. 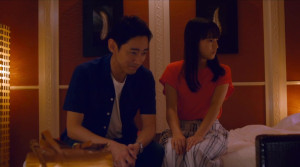 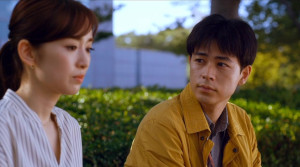 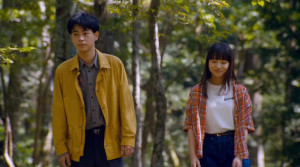 Therefore, "You're Not Normal, Either" is both exciting and entertaining. The humor is always to the point, sometimes turns out to be surprisingly black, and therefore also shows some social criticism. Perhaps the director's greatest achievement, however, is that the movie is romantic without trying to be romantic, or rather, it creates a warm and fuzzy feeling without actually aiming for it. With its running time of almost 99 minutes, the comedy is not too long either, you might even say that it would have been nice to learn a little more about the characters. But because the ending is nicely rounded off and entirely satisfactory without ever getting cheesy, you are easily able to forgive that. So, it should be clear by now that this movie was quite a surprise for me. With romantic comedies - if you actually want to put the movie in this category - a lot of things can go wrong, but here everything is done right, from chemistry to dialogues to the movie's humor. You don't get a cheesy flick for teenagers, instead you just get a good movie.