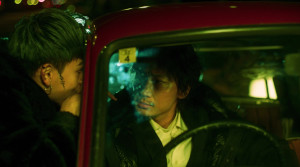 Story: Nokoshi (Go Ayano) used to have a well-paid job at an insurance company, but now he is homeless and lives in his car. However, he still has some of his old money. He is on a journey of self-discovery, partly because he has lost his memory. One day, the medical student Ito (Ryo Narita) talks to the homeless guy and asks him if he wants to participate in a study. Nokoshi is not interested, especially since he doesn't need the money, but Ito then promises him something much better. He knows that the homeless guy has lost his memory and that he is also unable to feel any emotions. The student says that after the experiment, it would only take a week for that to change. Nokoshi finally agrees to do the study, partly because he has no purpose in life anyway. For the study, the scientist drills a hole in the subject's head which is supposed to reduce the pressure on the brain and might enable him to develop a sixth sense. Nokoshi does not believe in things like that, but it turns out that he is actually one of the few subjects who respond well to the "treatment". From now on, his left eye is able to see people's traumas, often in form of abstract images superimposing over the people he looks at. He comes across a yakuza boss and only makes it out alive, because he can see directly into his soul, and this confrontation frightens the gang boss. It turns out that Nokoshi can actually remove people's emotional distress. But it does not simply disappear, it sticks with himself instead... 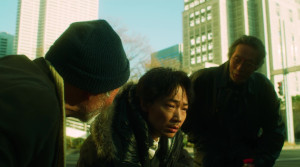 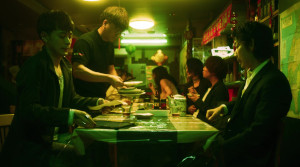 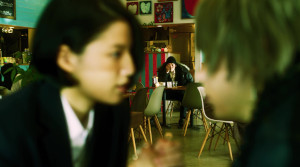 Review: "Homunculus" is one of those pieces of work that make it hard to pinpoint what you think of it. The movie's mood and atmosphere are pretty unique, but somehow the final product does not do justice to what the flick probably aimed to achieve. Manga enthusiasts will surely agree immediately and would point out that the original by Hideo Yamamoto, on whose work Takashi Miike's "Ichi - The Killer" is based as well, is by far better than this adaptation. But since I have not read the manga, this will be an unbiased review, which doesn't mean that it will just be positive, though. The reason for that is most notably the movie's slightly episode-like structure, and the fact that the story sometimes gives us a taste of how deep it could have delved into the subject matter, but ultimately it only stays on the surface. This is unsatisfactory, and even gets frustrating. Especially towards the end, this becomes all the more clear. 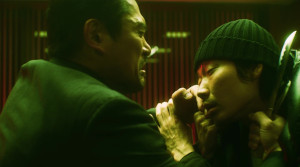 The story begins as a mystery thriller. We are dealing with a homeless person who lost his memory and is unable to show any emotions, but has enough money to eat at a fancy restaurant. Very strange. But we come to know that he is on a journey of self-discovery. What the medical student's real objective might be, also creates some suspense because it is a bit odd how fixated he is on getting Nokoshi, of all people, to participate in his study. All this sounds promising, and of course there are also some supernatural occurrences after the experiment, which raise even more questions. But it soon becomes clear that Nokoshi is able to see into people's psyches with his third eye, because that's what it actually is. This reveals the full potential of the story and watching Nokoshi delve into people's psyches is actually pretty exciting. In the end, however, especially as the movie progresses, those scenes become more and more disappointing because they get more superficial by the minute too. 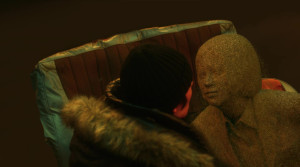 Since we are dealing with a Netflix movie, the budget isn't necessarily small either. However, this means that the flick focuses a little too much on visual aspects. The special effects are quite impressive, and the visualizations of the inner conflicts are actually pretty original too, but the focus should be more on what lies beneath the surface, and in this respect the story about the yakuza boss turns out to be probably the best one. Even though, in the end, this one is somewhat unspectacular too. At least, a sequence in a car involving a schoolgirl who Nokoshi "heals" from her perversion, makes for an extremely strange, for some viewers perhaps even disturbing scene. Especially when it comes to the medical student, though, you would expect a more profound trauma. But when the solution is presented to us, you almost have to laugh out loud, because it could hardly have turned out more superficial. Nevertheless, the movie celebrates his emotional breakdown for quite a while, without any real justification, because Nokoshi has actually done little for the student's healing. 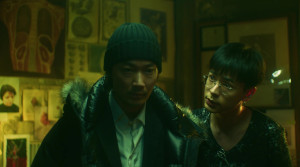 However, the movie is also about the protagonist's past, which is rather mysterious. When he then runs into a woman from his past, the mystery thriller shifts its focus towards recovering his memory. We get a nice twist here, but you generally also get the impression that you are watching different episodes of a tv show here. In addition, the movie's ending seems rather random. There might be a slight hint of art house cinema and something special hidden behind all this, but this is probably more evident in the source material, while we only get an echo of what could have been here. Nevertheless, Go Ayano ("Ajin: Demi-Human") is able to portray his role with different nuances, and as the story progresses, his character visibly changes. Go's acting performance also grounds the movie, because with its sometimes unusual mood "Homunculus" could otherwise easily have turned out weird. 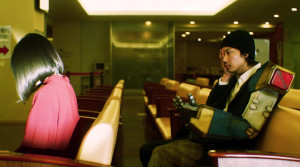 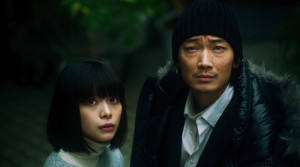 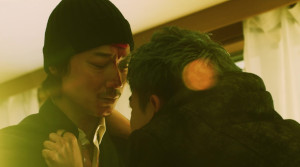 Director Takashi Shimizu is no stranger to creepy mystery atmospheres. On the one hand, he is of course known for "Ju-on: The Grudge", but with "Marebito" he has already been able to create a world focusing on the psyche and isolation, expressed in an enigmatic story and a directing style which emphasizes otherworldliness. The idea that someone can become the perfect psychoanalyst by creating a third eye (with a drill of all things!) is fascinating, but psychoanalysis is a very complex subject matter, and in the end, the movie does not do it justice. There would have been so much room for fascinating stories, but apart from one or two good ideas, the movie unfortunately leaves us high and dry. All in all, "Homunculus" is an interesting movie experience, but also one that leaves you craving for more and for something better. Perhaps that is where the source material could come into play.