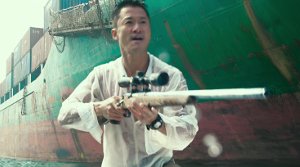 Story: Leng Feng (Wu Jing) is released from his military duty after he has stood up for the family of one of his fallen comrades and turned violent. He also has to go to jail for a few years which is when he finds out that his girlfriend Lieutenant Colonel Long (Yu Nan) has been kidnapped during a mission in Africa. When Leng is released from prison two years later, he goes to Africa and works as a mercenary, protecting ships from attacking pirates. His only clue about the whereabouts of Long is an unusually marked bullet. However, the mercenary eventually is pulled into a bloody civil war. The rebel forces get support from a European mercenary unit under the leadership of Big Daddy (Frank Grillo). They want to capture a Chinese doctor. At the same time there are also a few Chinese stuck within the war zone, who need to be taken out of the country. Leng Feng volunteers to undertake the task for the Chinese army. He eventually saves female doctor Rachel (Celina Jade), who is fighting against a deadly virus spreading across the country, and wants to free the remaining Chinese as well. However, contrary to the rebels Big Daddy doesn't see any problem in involving the Chinese into the war as well. 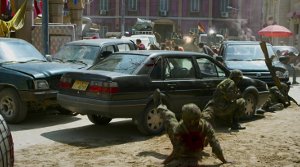 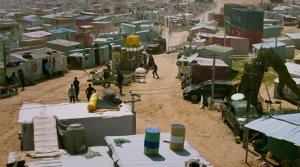 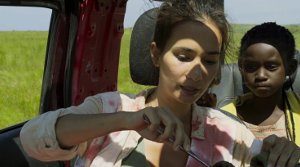 Review: It would have been so much easier to write a review about China's most successful movie of all time, even surpassing "The Mermaid", if it had just been a borderline moronic action movie reviving elements of 80s cinema and thus spreading the kind of simple fun you don't get to see that often nowadays. It wouldn't matter that it is still a guilty pleasure with all its stupidity. But as was the case with the first installment this is also a military propaganda movie which wants to showcase China's power on the world stage. In this regard I'm somewhat ambivalent. "Wolf Warrior 2" isn't nearly sticking as closely to the official political party program as you might expect. Instead, the country rather wants to show, as was the case with the Olympic Games, that the old image of the sick man of Asia, which was created during the Qing Empire and following Republic, is now history. 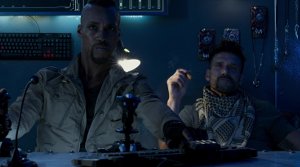 One of the moments showing this very distinctively is when China's navy shoots its missiles at the villains. This doesn't happen as a sort of show of force per se, but follows the tears and anger of the commanding officer as he sees the injustice and atrocities committed against humanity. China thus presents itself as a highly moral world police and by doing so drives off the United States from the playing field, which have taken to their heels in the conflict with the African rebels anyway. So where is the communist handwriting? Well, it isn't jumping right at you, that's for sure. That's interesting since you start to realize that a movie like "Wolf Warrior 2" surely would have looked different a few years back. But that's where the words of praise stop. Because in the end the flick still remains a nationalist piece of propaganda work. 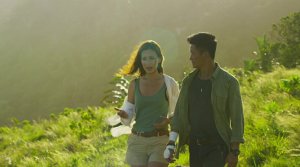 Visually and in respect to its special effects the sequel surely has a lot more to offer than "Wolf Warrior". The script isn't as ridiculous either. Yet, the story is clearly still very flat and draws the picture of the white savior which until now America was so happy to portray. The African rebels are supported by evil European mercenaries which our hero naturally has to face. Important in this context is that Leng Feng tells his opponent, after he is told by him that China will always be inferior to men like him, that "This is history". A not that subtle reckoning with Western powers under which China had to suffer so much in the past and at the same time an act of breaking free at last. It's those moments that don't allow you to watch "Wolf Warrior 2" simply as a stupid, yet fun action flick. 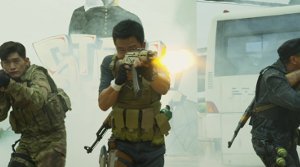 However, the story's hero is without a doubt one of those righteous, invincible heroes who may have fallen from grace, but as before are a shining example for everyone else. As was the case in the first installment Wu Jing once again stands behind the camera as well and he has brought quite a few impressive action scenes to the screen. The only thing bothering a bit is that they have been captured with a camera too shaky for its own good and the computer-generated special effects, particularly the great amount of blood spilled during the shootouts, looking everything but authentic. However, there are also a few practical effects which are nice to look at. In this regard the tank fight stands out the most. During those moments you can just check your brain at the door and simply let yourself be entertained. The level of violence is also quite high as you would expect from an 80s flick. The coldbloodedness shown by the rebels when butchering all and everyone, even women and children, is sometimes outright shocking. 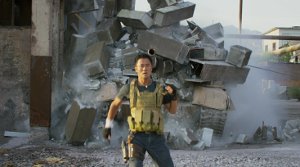 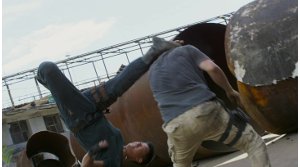 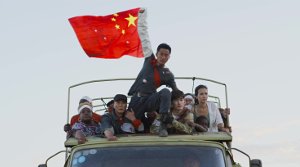 Still, too much action also isn't always the best option. "Wolf Warrior 2" gets tiring at some point with its neverending shootouts, and with a running time of two hours the picture is too long as well. Thanks to the tanks involved towards the end the movie might become more original, but you certainly would have wished for some more hand-to-hand combat as those encounters have been scattered throughout the movie rather scarcely. However, the showdown against Frank Grillo will manage to please most fans. Also leaving a bad taste in your mouth is the everything but politically correct portrayal of the Africans as they dance around a fire or especially in the shape of the obese mother, who - always aiming at amusing the audience - overpowers the rebels with her motherly dauntlessness. The characters remain pretty shallow as well, being particularly a shame in regard to Celina Jade (also to be seen with Wu Jing in front of the camera in "Legendary Assassin"). "Wolf Warrior 2" is actually quite fun and manages to eliminate some of the predecessor's flaws, but you also just want to tell Wu Jing to finally please lower the Chinese flag before his arm falls off...