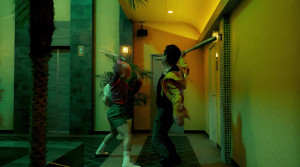 Story: Kei Kikuno (Kanna Hashimoto) pretends to be a call girl when she goes on one of her assignments, but she's actually a contract killer. When she's not goofing around with her boss (Fumika Baba) or Zura (Takashi Okamura), she also attends an accountant course. Then, one of the course members, Watanabe (Oji Suzuka), comes to the restaurant Kei and her boss use as a hideout just when things turn into a deadly quarrel there. But since Watanabe has fallen head over heels in love with Kei, he is not too shocked, but even wants to become part of the group. But Kei has to face a particularly dangerous assignment at the moment. The yakuza boss Sandaime (Jiro Sato) soon has to go to prison for a few years and he wants to hand over the temporary leadership of the organization to whoever proves to be the most capable. Kinoshita (Katsunori Takahashi) wants to become the new boss no matter what, so he instructs Kei to eliminate his biggest adversary. However, that's just the beginning, because Kei is drawn deeper and deeper into the power struggle within the yakuza, while one of the yakuza killers, Michitaka (Yuu Shirota), is out to get her because he has a problem with a woman succeeding as a professional killer. Even though Kei doesn't even break a sweat during most fights, Michitaka could actually become dangerous for her... 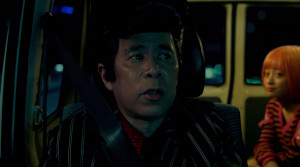 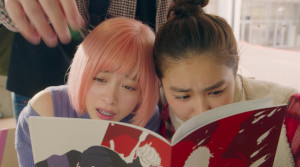 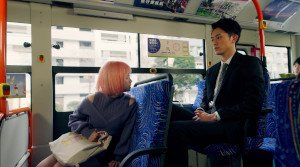 Review: "Violence Action" is another movie that proves that there are no discernible rules by which a streaming service like Netflix and Sony bring a manga adaptation (actually, we are dealing with a webtoon here) to international screens. The tone of this action comedy - with some ventures into quite a bit of violence - most certainly won't appeal to a broader audience. We are dealing with a world that seems to be located right in between our real world and a fantasy world. Every now and then, Kei moves as if she was in the Matrix, showing superhuman speed and acrobatic skills on a superhero level. Yet, the flick's biggest problem is its editing, which repeatedly reminds us of a music video we are beaten round the head with - or rather our eyes being maltreated - with two images per second. I'm not exaggerating if I say that this shortcoming will probably be the reason why some viewers will turn off the movie in order to avoid dizziness and nausea. 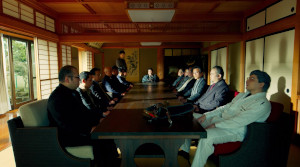 To be fair, this fast editing style could as well have become the movie's special feature if it had been used in moderation and only during the action scenes. In the first action scene, which functions as an introduction, we get to see Kei in staccato-like still images, shooting around in various physically impossible positions. But it actually works and creates a nice bridge to the original work by Shin Sawada and Renji Asai. Unfortunately, we get to see moving images in which nothing really happens and yet they are edited that way too. If we watch the killer walking along the street for the umpteenth time, while being shown from different angles every half second, it just gets extremely annoying as it does not provide any additional value whatsoever. This certainly does not make the flick more exciting or interesting. Things get really bad when the story turns chaotic towards the end too. 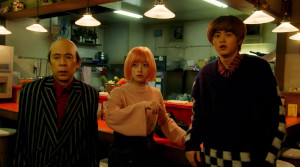 But if you're honest, you won't expect a remarkable story here anyway. At least, there is a rather entertaining power struggle within the yakuza, during which you have to keep track of the different characters and their loyalty to the respective parties. In general, the movie is strongly supported by its characters, who may not have any depth, but at least they have their own little quirks. There are stereotypical characters like Zura, who is supposed to be the comic relief with his helmet wig, and there is also the yakuza boss, who gets an unusual touch with his dad jokes (some of which get lost in translation, though). Even Watanabe, who forms a love triangle with Kei and Terano, is more than just the insecure, anxious type. But especially with him or the killer Daria you get the feeling that a lot of things were cut down. As is the case with so many live-action adaptations, the sheer variety of characters simply make it impossible to really warm up to the individuals. 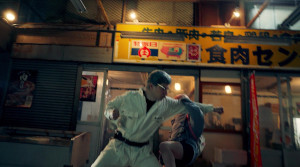 Unfortunately, Kei is another example for a character lacking personality. At the very least, her candy-colored life and the light-footedness with which she kills other people don't quite fit together. We've already seen better versions of that in movies like "Baby Assassins", for example. However, Kanna Hashimoto ("Assassination Classroom") fortunately delivers the necessary charisma and cuts a fine figure in the action scenes too. Surely, that's also due to the flattering editing and the fact that Kei suddenly displays fantastic anime-like skills. The images often convey a certain kind of contrast too. The scenes in the gangster world or during Kei's assignments are often quite sober, whereas the colors in moments in which Kei is sitting together with her friends are much richer and more colorful, and by adding a J-pop-heavy soundtrack too, the movie therefore tries to create a somewhat cheerful atmosphere, which you would rather expect from a comedy. Weirdly enough, this contrast works quite well. 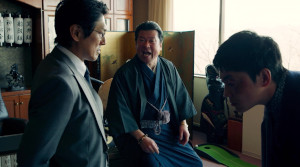 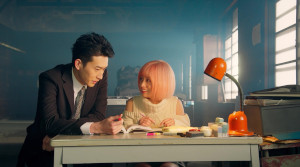 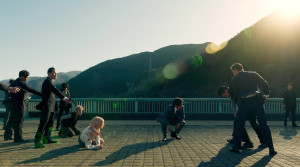 Nevertheless, towards the end, you get the feeling that the movie makers tried to pack as much as possible into the story, and the result is a rather chaotic finale, in which - to make matters worse - a rather anticlimactic final fight against the seemingly invincible villain Michitaka (a fascinating, if somewhat clichéd character) takes place. No doubt, the movie obviously managed to stuff a lot of the original material into less than two hours, but the whole thing doesn't feel right. Besides, you just cannot overlook the annoying editing work. "Violence Action" is a colorful action flick, which is clearly entertaining and does not go overboard with dramatic elements either, but unfortunately, the movie's positive and negative aspects balance each other out so well that I simply cannot give a clear recommendation here.