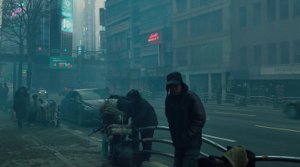 Story: Gi-hoon (Choi Wooshik) and Jang-ho (Ahn Jae-hong) pick up their friend Joon-seok (Lee Je-hoon) from prison after he has spent three years behind bars. But there is not much left of the money for which he went to prison for all three of them. Because of the enormous national debt, the Korean Won is no longer worth anything, and people are actually only paying in dollars in the country now. However, the two friends were only able to exchange very little of their money before this was banned by the government. So, after his release from prison, Joon-seok has nothing left and does not even recognize his country anymore, which has been struck by extreme poverty. But he already has a new plan. He wants to go to Taiwan and open a shop at the seaside. For this he wants to do one last heist. The target is supposed to be an illegal casino where only dollars are accepted. Fortunately, Sang-soo (Park Jung-min) works there as a waiter and because he still owes Joon-seok a lot of money, Joon-seok manages to persuade him to provide them with inside information and to join the heist. However, the real problems in fact arise only after the robbery. In order not to be recognized, the four took the casino's hard drives of the CCTVs with them. However, on these hard drives there are also the faces of important men doing business with the casino operator. To get the hard drives back, the casino hires cold-blooded hitman Han (Park Hae-soo), who is supposed to go after the robbers. Thus, a deadly hunt begins. 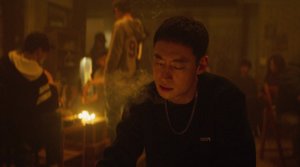 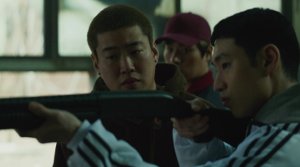 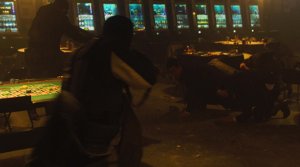 Review: "Time to Hunt" is quite a surprise because this flick mostly feels like an international movie, but every now and then it is clearly Korean, and sometimes it even reminds us of a low-budget movie, even though quality is (almost) always top-notch. Some of these aspects may be related to the fact that the film was produced by Netflix. At the very least, this would explain why the director was apparently given more creative freedom. The thriller starts out as a rather typical heist movie, but then turns into a gripping fight for survival. I said "rather typical" because the setting is actually quite extraordinary. It is clearly South Korea, but we seem to find ourselves in a not so distant future and the country has a slightly post-apocalyptic flair to it. This is mainly due to the yellow dust cloud hanging over the city as well as the unemployment caused by a financial crisis. 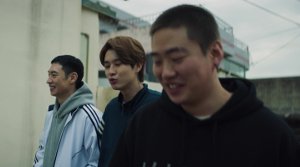 We don't really get that much background information concerning this world. But right at the beginning, the protagonists drive through the city, which is full of slums and abandoned, demolished buildings, and all this actually kind of reminds us of certain parts of the USA. Not telling us how all this happened, apart from mentioning a financial crisis, was a wise choice. We quickly accept this as the backdrop of the story, especially because it is a rather realistic "post-apocalyptic" world, not unlike what the present events of the world hint at. At the same time, the abandoned buildings allow the movie to look pretty believable despite its relatively low budget. I don't want to give the impression that "Time to Hunt" is a cheaply produced movie. It's rather that you can clearly see director Yoon Sung-hyun's handwriting, who had his debut with the indie drama "Bleak Night". The same feeling of abandonment and loneliness can also be found in this movie. 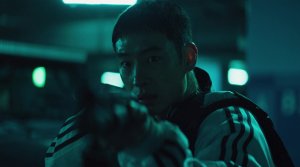 Lead actor Lee Je-hoon ("I Can Speak") gives a nice performance, especially because he shows the biggest change within the movie. At the beginning, we can hardly stand him. He more or less forces his friends to do the heist, but later he realizes what he is responsible for. This becomes obvious because he has several nightmares and so he slowly learns to take responsibility. The different nuances of his character work quite nicely, especially because at first, he seems unsympathetic to us, but in the end, he works really well as a protagonist. However, the fact that the end of the film has little to do with the beginning, cannot only be seen when it comes to the movie's characters. A lot is happening in the course of the movie and you could criticize that there is a certain kind of incoherence. This may make the story a little bit more gripping and even somewhat epic, because you feel like you're seeing a series, where each episode has a slightly different focus, but it is also proof of a script that isn't written carefully enough and that the director wanted a little bit too much of everything. 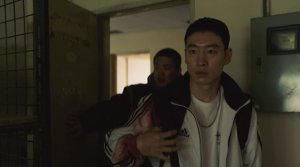 After some planning, the four amateurs rob a casino and this quickly gets us hooked, as it combines an unusual world with something that we've seen countless times in movies. But then everything gets scarier as the crazy hitman Han enters the stage. Because his presence is often shown by a face in the shadows, accompanied by creepy music, like in horror movies. And it works. You get really scared of this man who seems completely unpredictable. It raises the tension a lot and that's the movie's greatest strength. Along with some nerve-wrecking shootouts, in which the focus doesn't lie on the action, but rather on the danger of actually being hit by a bullet, "Time to Hunt" scores with an unusual focus. And all this is supported by a captivating score as well as matching sound effects and a continuously increasing heartbeat, which blends nicely into the music. The overall yellow tint of the movie and the run-down buildings also create a horror-like atmosphere. All of this is rather impressive. 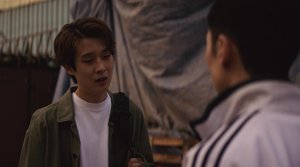 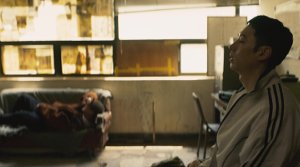 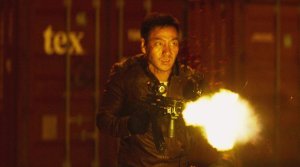 Of course, this isn't a horror flick, after all, but it's amazing how many elements from this genre have been used for the thriller. "Time to Hunt" is incredibly gripping, even though it's a little too long with its running time of more than 130 minutes. However, it never really gets too long-winded. Still, it would have been nice to get a little bit more depth concerning the supporting characters, so that the drama could have worked better. The end of the movie first seems to deny us the catharsis that we, or rather the hero of the story is looking for, but then you finally get it... and yet again, not really. Director Yoon makes the mistake of putting an epilogue at the end of his movie after another which turned out too long. In general, it is not that bad, but Yoon shows once again that he often loses focus. Despite all that, "Time to Hunt" is a well-done and above all, exciting thriller that stands out with its special atmosphere.