Story: Yeong-gyoo (Lim Chang-jung) is a smuggler, every now and then he also gets involved in organ trafficking, but the last time he did things didn't turn out so well and he lost a friend. Nowadays he is taking care of smaller smuggling business, and he tries to conquer the heart of the girl Yoo-ri (Jo Yun-hie), who isn't interested, though, and is taking pains to get a donor organ for her father. When she doesn't succeed by legal means she turns to a shady character who is setting things up for the operation to take place in China. However, what's still missing is an involuntary donor. That person is soon found in wheelchair-bound Chae-hee (Jeong Ji-yoon), who is enjoying a cruise to China with her husband Sang-ho (Daniel Choi). Yeong-gyoo lets himself get talked into accepting this kind of job for one last time because of his debt. With his team he wants to kidnap Chae-hee on the ship, have her organs removed by surgeon Kyung-jae (Oh Dal-su) and make all evidence that she has ever been on the ship disappear completely. But he didn't anticipate the doggedness of her husband Sang-ho.

Review: In recent years South Korea proved more and more that local filmmakers have learned how to deliver a good thriller, but the topic of organ trafficking isn't that new in the movie business. "The Traffickers" is a well done surprise nonetheless. The debut work of director Kim Hong-seon is exciting and dares to go further than others, after all an organ trader stands in the center of events! The choice of this protagonist also brings a fresh breeze into the movie, accordingly the atmosphere is enriched with despair and hopelessness, nihilism the kind of you normally only get to see from Hong Kong thrillers is omnipresent. Furthermore, there is also a surprisingly good cast and numerous twists will leave you no time to take a breather. If it weren't for a serious problem towards the end of the film "The Traffickers" could have become the best thriller out of South Korea of the last few years. 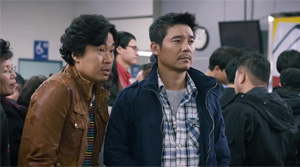 First and foremost, the choice of Lim Chang-jung ("Miracle on 1st Street", "Sex is Zero") as the morally questionable organ trader is a strange one. But Lim only needs a few minutes on screen to make his standard role of the likeable numbskull in countless movies pale into insignificance. He kicks women, is smuggling for whatever he is paid for and apparently is absolutely unscrupulous. Even though Lim may be the star of the film all throughout, he gets strong competition from Daniel Choi ("Cyrano Agency") as the husband on a desperate search for his wife, and the rest of the cast is equally good, only Jo Yun-hie ("Doomsday Book") as the daughter of the man who urgently needs an organ transplant sometimes can't keep up. 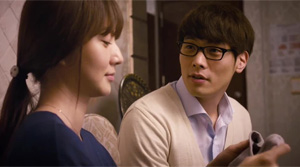 After the enthralling introduction - we are now aware that we can't sympathize with any of the organ traders - we find ourselves on a ship, completely isolated from the outside world, and are hoping for the wheelchair-bound woman, who is the victim of a cleverly devised plan and doesn't seem to have a chance at all, to survive somehow. While the husband is rushing through the mazelike corridors of the ship his wife is about to get cut open any second and that is the moment the perfidious appeal of the movie kicks in. We are in fact sympathizing with the organ traders, even though we more do so with the husband and the future victim. But the fact that we at least to a tiny degree want to see the well devised plan of the organ traders pay off is a feat that not every viewer will be able to bear. And that the director had the courage to bring the audience in such an extremely unpleasant position is worthy of big kudos.

The oppressive atmosphere and the constantly rising suspense level is made even the more unbearable by constant bursts of violence during the most unexpected moments with all the harshness involved. There is actually a lot of blood, but the movie doesn't overuse it, it's more the decisions of the screenwriters that make us cry out: "You didn't just do that, did you?!" Oh yes, they did, "The Traffickers" is taking that step further that others normally are at best hinting at. You are also rewarded by numerous twists that are aptly incorporated into the movie. With the exception of a certain one, and this is what makes the film almost collapse. The last big twist is a little bit too much, retrospectively makes a lot of things look illogical and is the reason for the ending to suddenly become bumpy. Somehow the film manages to get on the right track again, but the damage has already been done. 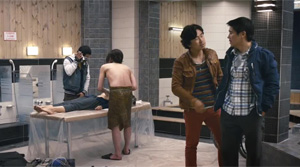 The film's subject is dealt with in a serious enough fashion and the despair in the movie makes us cease to believe in humanity in the world sketched within the framework of the very effectively used running time. Characters that are at best drawn with greyish colors stand in the story's center and the decisions and actions that we are witness of leave no doubt that everything might happen on screen. This unpredictability and implacability along with the high pacing and a captivating atmosphere make you forget to fill your lungs with oxygen most of the time. The last twist, which is the producer of many plot holes, is thus a clumsy sleight of hand that denies the movie a better rating which it would have deserved because of its courage to do things differently and go further than usual. Nevertheless, "The Traffickers" is still a well done thriller.