The Thousand Faces of Dunjia 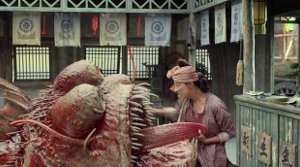 Story: Wan Yizhang (Aarif Lee) is a constable and one day he is involved in the hunt of a monster-like fish, which Dragonfly (Ni Ni) manages to capture. Dragonfly erases the constable's memories about the incidence and takes the fish-monster back to her clan. The temporary leader of the Wuyin-Clan (Wu Bai), a clan dedicated to protecting mankind, discovers that there is a dark entity, whose goal it is to destroy the clan. Meanwhile, the fish-monster is actually a trap and discloses the clan's location. While the clan gives up their base of operations, the group's assistant leader Zhuge (Da Peng) is searching for the Wuyin-Clan's new leader. The leader can be recognized by a birthmark on the arm. He finds this person in the young woman Circle (Zhou Dongyu), who is not welcomed very favorably by the clan, because she is naive, childish and shy. Nevertheless, the clan needs a strong leader, as Dragonfly and her men didn't manage to prevent a powerful monster to be reawakened. Only thanks to the policeman Yizhang, who came across the clan once more by accident, did she manage to make it out alive. Yizhang, however, lost an arm and a leg in the fight against the monster. Now, they don't just have to stop the monster, which wants to erase all human beings, but also have to find a powerful weapon, which would give the monster even more power. 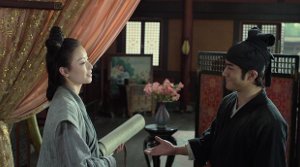 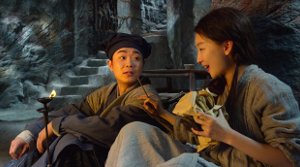 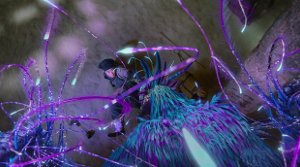 Review: It doesn't take long to realize that this is an entertainment flick, whose real stars are the special effects. Unfortunately, the computer generated effects are in fact far from convincing. In the end, "The Thousand Faces of Dunjia" just turns out to be some sort of fantasy hullabaloo, with similarities to today's marvel movie adaptations: aliens, who want to conquer the world, an union of fighters and magically gifted individuals considering themselves some kind of protectors of the earth. Sadly, the movie lacks interesting characters and enough budget to avoid making the epic battle royal look ridiculous. Being easily accessible on Netflix, this flick will most likely make the general public avoid Chinese fantasy movies for the rest of their lives. Connoisseurs of the genre, on the other hand, will get angry about the fact that the wuxia elements fade in the background in favor of deafening explosions etc. 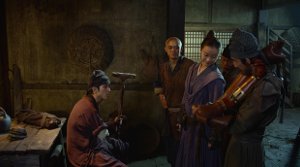 In the world of "The Thousand Faces of Dunjia" aliens have apparently been among us for quite some time. We can notice parallels to "Men in Black" when we see the big fish jumping from rooftop to rooftop, knowing that this is a creature from another world which can disguise itself. But disguising yourself is a daily fare here, anyway. Everything in the world of "Dunjia" can be an illusion. At the beginning, we are told about Qimen and Dunjia, as well. Qimen is the concept of time and Dunjia is a highly complex astrological system, which makes Feng Shui look like drawing with finger paint. The high art behind this doesn't need to concern us, because the movie is just a sequence of different scenes put together randomly. Responsible for the direction is no one else but Tsui Hark, yet he proved with "The Flying Swords of Dragon Gate" that he, as well, can fall victim to the brightly colored fantasy idiocy, which makes the cash register ring in China. 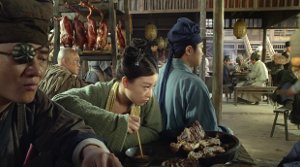 However, there are some elements that are reminiscent of wuxia flicks and the world of jianghu. For instance, the different clans, which are in conflict and each develop a different magical fighting style, or characters that suddenly develop magical skills. The story is divided in chapters but not in a way that would suggest a real cut in the plot. Instead, there are constant cuts in the story. Why the heroes are on their way to location x or have to deal with person y, nobody knows. Where the weapon "Destroyer of Worlds" comes from or what role other seemingly important plot details play in the big picture remains a mystery, as well. The villain (actually, there are two of them) doesn't have any sort of characteristics, which basically fits because he is generated on the computer, anyway. At least, it is clear who our heroes need to defeat. 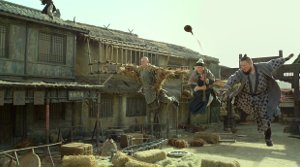 But let's be honest: We can excuse a weak storyline with American superhero movies (and "The Thousand Faces of Dunjia" is not any different from those, except that it takes place in ancient China), but then the characters need to win us over and have some sort of peculiarities. But unfortunately, there is no time to explore these oddities. The fast pace, the action sequences and the rather unsuccessful slapstick constantly demand a change in focus. Ni Ni ("Wu Kong") is the real heroine here, but then there is also Da Peng as a doctor, who is actually supposed to play a big role in the Wuyin organization, but disappears in the background for far too often and remains a shallow character. The two characters form a love triangle with Circle, but what exactly this has to do in the movie - which is already bursting with characters and side plots, anyway - nobody really knows. But it would also be wrong to say that the characters don't manage to win us over at all. There are some dramatic scenes, which are almost fairly effective. 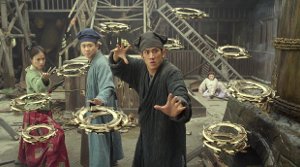 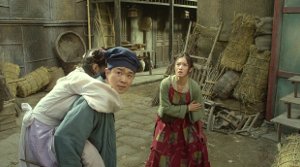 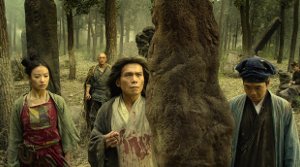 Moreover, it would have been easy to change the focus of the plot completely to Aarif Lee's ("Kung Fu Yoga") character. But in the end, there is no real focus in the movie. The action sequences are not really satisfactory because the cheap CGI-effects constantly get in the way. And when our heroes all get some special powers in the end and are able to fly in the sky just like that, but instead we get a computer-generated creature fighting against two other ones, we ask ourselves what all of this is about. There just is no motivated plot line in this story. Director Yuen Woo-Ping, of all people, sold out to commercial Mainland cinema, but he already had to take some criticism for "Crouching Tiger, Hidden Dragon: Sword of Destiny". Nevertheless, the wuxia moments still carry his handwriting and this made us hope that in the end, we maybe will still get a decent movie. The result is just forgettable, though.