Story: Baek Yeo-hoon (Ryoo Seung-ryong) is chased after by armed men and eventually ends up in a hospital severely injured. He is treated by physician Lee Tae-joon (Lee Jin-wook). But shortly thereafter Lee's wife is kidnapped. The kidnapper demands of the physician to get Baek out of the hospital and right to him. But that proves to be quite difficult as Baek is a suspect in a murder case and accordingly the police don't leave him out of their sight. However, Detective Jeong (Kim Seong-ryeong) has to struggle with jurisdiction problems since Chief Song (Yoo Joon-sang) is actually working on the case. After Lee has in fact managed to get Baek out of the hospital the suspect suddenly runs off, leaving the physician emptyhanded before the kidnapper. Furthermore, there is another group that is after Baek's life. Being a former member of a military special operations unit Baek is capable of standing his ground againt those men, while Lee and Detective Jeong try to find out how the different parties are connected in this case.

Review: Actually, it isn't a good sign to see more and more remakes coming out of Korea. In the end this means that filmmakers there are slowly running out of ideas like their Hollywood colleagues apparently already have. Yet, "The Target" is still a rock solid action thriller which you can't really go wrong with. Its somehow shallow story is made up for by two good actors and a neat pacing. There might be more than just a few inconsistencies, but compared to the rather slow start the thriller succeeds to continually raise the tension bar and scores with a fine showdown. There might also be a few moments during which the action can't tap the picture's full potential, but the movie never gets boring and moreover manages to make you weave an emotional bond to the events in a sufficient manner. 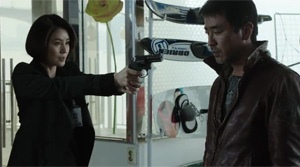 "The Target" is in fact the remake of the French movie "Point Blank" from 2010. But the elements derived from that one are already well-tested. There is a former elite soldier and a manic villain as well as a helpless pregnant wife, of course. Those elements alone don't amount to much and accordingly expectations are quite low at first. But that changes at the latest when a big twist comes around the corner, leading to a murder that will hit you fully unprepared, reminding you of good old Hong Kong cinema. At least I was won over from that point onward. But some nihilistic elements put aside it's most of all the portrayal of the main characters that make the movie cut a better figure than actually should have been possible. 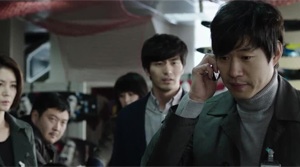 First of all, there is Ryoo Seung-ryong ("Miracle in Cell No. 7", "Masquerade"), who doesn't really have to fill a true role, but delivers a convincing action hero, who moreover shows his emotional side in completely unexpected moments, which makes us think that we get a glance at the complex inner workings of an individual, even though the screenplay doesn't draw him that accurately at all. In his core Ryoo simply is an excellent character actor, but he also shows strong physical presence in a few action scenes. However, concerning the brawls it has to be criticized that they are often edited awkwardly, as if some scenes had been cut out of the movie, but Ryoo's fight scenes are still so convincing, authentical and straightforward that there isn't a second we doubt he can actually tear apart a whole gang of thugs.

The other personality making an impression is Yoo Joon-sang ("Fists of Legend", "HaHaHa"), who obviously has a lot of fun with his role. Lee Jin-wook on the other hand plays a main character that is soon taking a backseat and in the end becomes nothing more but a side note. Here, it turns out that his experience from several drama shows isn't enough to keep up with the heavyweight actors. His role makes it even the more obvious how little the screenplay centered around drawing individuals. Apart from that the screenplay is also full of odd plot holes and the characters oftentimes act in a way that is hard to comprehend. At least the action is loosened up by a few comedy moments that frequently go hand in hand with violence. This works out quite well without the movie losing some of its gritty gloss. 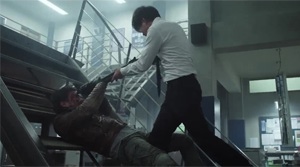 Director Chang ("Death Bell") doesn't only prefer a monosyllabic pseudonym these days, but also likes to experiment with his editing. But unfortunately that is a pain in the neck. However, he deservers some words of praise for the set pieces. Especially the finale at the police station has a vibrant atmosphere providing that special something. Granted, Chang might just be delivering a remake, but the film continuously feels like a Korean thriller, which is particularly reflected in the mood and the action sequences. It's probably also because of a mediocre start, even though the pacing is already high here as well, that the picture can surprise you and be really captivating in the end. At the bottom line, a few well done action scenes and more than anything else two good actors make "The Target" a maybe soon to be forgotten, but nonetheless solid and very entertaining action thriller.