Story: Eun-yi (Jeon Do-yeon) is hired by a rich couple as a housemaid. Although she originates from a completely different background she settles in pretty quickly, also thanks to the constantly cold, but motherly superior Byeong-sik (Yoon Yeo-jeong). The wife in the family, Hae-ra (Seo Woo), is pregnant with twins and soon has found a liking in the rather childish Eun-yi. An especially caring relationship the housemaid builds up with the little daughter of the family, Na-mi (Ahn Seo-hyeon). Hoon (Lee Jeong-jae) is the husband and on business trips a lot. One night he turns up in Eun-yi's room and seduces her. The two engage into an affair, which doesn't remain undiscovered for long, though. Furthermore, Byeong-sik finds out that Eun-yi is pregnant even though she herself isn't aware of it, yet. She shares this information with Hae-ra's mother (Park Ji-yeong), who thereupon pulls out all the stops in her own way to protect her daughter from worse mischief. Someone like Eun-yi is dispensable to the family and when all else fails can at least be bought with money. But Eun-yi thinks differently...

Review: "The Housemaid" is a classic by Kim Ki-young from the year 1960. Therefore, it isn't a surprise that it had to get a remake one day. However, the one responsible for the remake isn't just anyone but Im Sang-soo, who already could win over critics with his film "A Good Lawyer's Wife". Nonetheless, what's posing a problem is that the core element of the drama also stands as the biggest flaw. "The Housemaid" is supposed to sketch the cold and inhumane side of money, that is because money can also corrupt the heart. Unfortunately, that's also leading to the movie as a whole creating an incredible distance towards the viewer. This would have been somewhat bearable and also plausible, but since even the housemaid looks extremely removed, there is no one for us that we could relate to in any way. 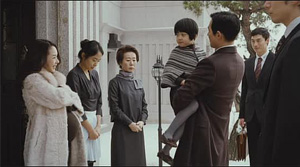 All in all there should have been put more effort into the elaboration of the characters. The husband, played by Lee Jeong-jae ("Typhoon"), constantly wears a mask. He may be spending some time with his family, but even that seems forced, as if posing for an invisible audience. Since his wife is pregnant at the moment and isn't that much in the mood of spending the evening in bed with her husband, latter one gets what he wants from someone else. Still, you can be pretty sure that he actually isn't in need for some sort of excuse like the pregnancy of his wife. Someone with as much money as he has simply takes what he wants at all times. Apparently, women instantly succumb to the appeal of his money as Eun-yi doesn't truely show resistance when being seduced by him. If she had resisted this probably would have become a raping, however. 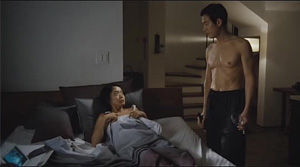 The wife remains rather inscrutable as well. She tries, as does everyone in the house, to treat the housemaid respectfully and she eventually even gets along with her very well. But even then you can't fight the feeling that this is solely the case in a shallow way. The daughter Na-mi on the other hand shares a special connection with the housemaid. But Na-mi is under the influence of cold parental love and always seems a bit distant. Accordingly, there is only the housemaid left as a sympathetic figure. Jeon Do-yeon ("Secret Sunshine") more than any other actress should be capable of mastering a complex role. But sadly she seems unstable at best. You can't comprehend her decisions, eventually she almost is wandering on the treshold of madness, but it still doesn't really add up.

Only the elderly housemaid Byeong-sik gains some more depth thanks to Yoon Yeo-jeong ("Maundy Thursday"). In fact she is the only character at the house, who seems to be honest, even though especially her loyalty belongs to someone undefinable. Yet, she is displeased with her whole job for years already and that makes her likeable despite her at times stern nature and personal flaws. Therefore, Eun-yi doesn't work as the film's protagonist, this is even the more true since her alleged good-naturedness isn't really evident, after all she is having an affair and in front of the wife pretends as if nothing happened. The only thing that in some way speaks in her favor is an unhealthy amount of naivity. That the world of "The Housemaid" was supposed to be drawn as cold and without emotions is understandable, but that this also includes the housemaid isn't. 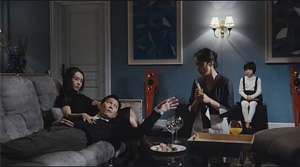