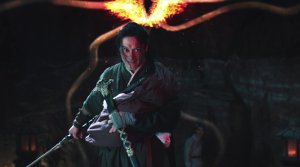 Story: In order to get superhuman powers two masters once created two powerful artifacts: the Divine Eyes and the counterpart called the Evil Eyes. The former is in possession of the Shendiao cult and when the hiding place of the latter is found, it comes to a fight between the Shendiao cult and a swordsman who was sent by his master to prevent further harm. During the fight, however, an eunuch gets hold of the Evil Eyes and the swordmaster - who also has his baby with him - gets poisoned. The father manages to entrust his daughter to a man who is supposed to bring her to Tianshan. In the meantime, the Evil Eyes turn the eunuch into a powerful fighter who wants to break with the Shendiao cult. But thanks to the counterpart, the cult can use him as a marionette.
Sixteen years later, the baby has grown into the young women Yi Lanzhu (An Ziyi) training under her young master Ling Weifeng (Zhang Zhuowen), who she is also in love with. Ling receives a letter which says that he is supposed to go to the Wu Mansion because the Shendiao cult kills every practicing martial artist there. On their way, he and Lanzhu meet the woman Liu Yufang (Chen Jie) who fled from the Wu Mansion and has an important letter with her which needs to be decoded. Ling agrees to help her. In the meantime, the eunuch, who now calls himself King Asura (Ruan Haozong), forged out a plan on how to free himself from the Shendiao cult. However, he needs seven magical swords for that. He already has five of them while Ling and Lanzhu own the rest of them... 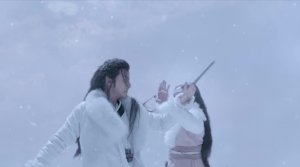 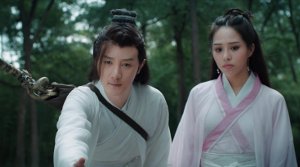 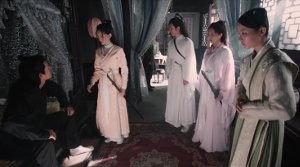 Review: Once you hear the title "The Seven Swords", you won't help but think of Tsui Hark's flick from the year 2005. But apart from that, there are very few similarities. In fact, it is striking how director Francis Nam tries to rekindle the special charm of the 80s and 90s in the style of a Tsui Hark and by doing so undoubtedly also gives the movie a certain B-movie character. On that level the movie actually is a lot of fun to watch. However, there are problems with the movie's pacing, narrative style and the editing. There is so much happening during the first ten minutes that you will have trouble keeping up. Then it turns out that this was just the introduction and the real story has not even begun yet. That would actually not be a problem if a reasonable editing had made the pacing a little bit more bearable. But "The Seven Swords" often gets too confusing and episode-like whilst it stumbles over its own feet over and over again because of its fast pacing. 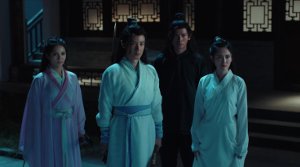 Behind the story lies an epic wuxia world which occasionally pops up here and there. Unfortunately, the narrative style does not help to understand why certain things are actually happening. Starting with the question why the swordsman has to take his baby with him when he fights against the Shendiao cult. Sure, it is reminiscent of "Hard Boiled" and it was just cool there, but in this movie you simply have to scratch your head. Then there are all kinds of parties which you need to keep track of. Even though there are not even close to as many as in the movie adaptations of Jin Yong's novels. However, those play in a completely different league anyway. Interestingly enough, though, this movie will quite often remind you of series adaptations of those wuxia stories. The only problem being that they squeezed too much material into a 90-minute-movie and therefore, everything feels a little bit rushed in the end. 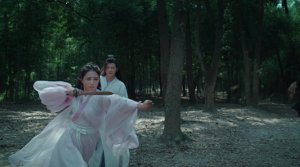 In addition, it is a mystery why the movie had to be kept so short. "The Seven Swords" already feels as if the director had put numerous episodes into one movie, which is also due to the changing focus. So, it doesn't really come as a surprise that the love triangle is suddenly the movie's focus, then the story turns to the heroes' pasts again, only to then put the love story even more into the center. Of course, the love story is accompanied by a good portion of kitsch, but it comes across as that kind of "poetic" cheesiness that is bearable because it is part of a romantic wuxia world. Luckily, this movie does not remind us of the TV series from China, because those mostly appear rather cheap. Instead, the love story even manages to makes us care about the events. Without all the tragic background information and the twists that the flashbacks reveal - even if they are a little bit hard to follow and introduced rather chaotic - the movie most likely would have turned out too cold. 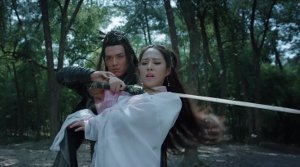 The breakneck pacing loses its momentum during the middle part of the movie and instead you get something that can almost be called a detective episode. This is the part which works best in the movie due to the fact that the director shifted down a gear and we finally have the chance to get acquainted with the characters a little better. Unfortunately, it is not enough to really raise our interest in the characters, but it is enough to make us care about how the story will end for them. This is what the movie could have built on and it would not have been too difficult to achieve either. It simply would have required some scenes here and there during which the pacing slows down to a bearable level and the main focus lies on the story's heroes. Because the characters do seem a little bit colorless with only the occasional spots of paint here and there. Especially in a wuxia story which works with emotions like love, jealousy, anger, betrayal and revenge the screenwriter should have put more effort into the characters. 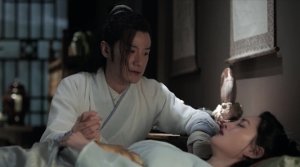 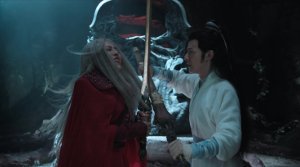 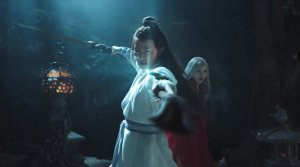 The coloring of the movie and some of the camera shots are clearly reminiscent of 80s/90s wuxia cinema. This means that we get the kind of kitsch that is somehow loveable. However, there was no need in copying the bad narrative technique resulting in events coming thick and fast. Moreover, the special effects are really cheap, but director Francis Nam is aware of this fact and therefore doesn't push them into the foreground, which, unfortunately, is common practice in current fantasy flicks like "Legend of the Ancient Sword". Instead, the special effects seem charmingly cheap. The fighting scenes might be a little bit disappointing as they are rather short and contain a lot of wire-fu or magic. Especially the chaotic editing seems to be a bow to the cinema of Tsui Hark, nevertheless, you have to ask yourself why Francis Nam did not want to put his own style into the mix. Therefore, what is left here is a wuxia flick that never gets boring, but also doesn't really fully excite you and therefore can only be recommended to genre enthusiasts.