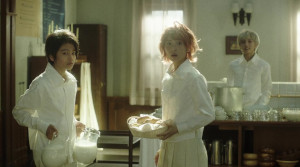 Story: Emma (Minami Hamabe) and Norman (Rihito Itagaki) are best friends and grow up in an orphanage. Everyone is happy there, and the numerous children spend their days learning and playing. The orphanage's director, who the children call "Mama" (Keiko Kitagawa), lovingly takes care of each and every one of them. However, every now and again, children leave the orphanage when new foster parents adopt them. One day, one of those children forgets its stuffed animal as it is leaving, so Emma and Norman quickly run to the property's gate. There, they see why the children are strictly forbidden to leave the premises. The children who supposedly get adopted, are actually killed, and used as food for demons. Emma and Norman just about manage not to be discovered and run back to the orphanage. However, "Mama" suspects that the two have discovered the orphanage's secret, but strangely enough, she doesn't act on it. The two friends decide to run away from the orphanage, but Emma also wants to take all the other children with them. For that they need a good plan and a lot of preparation. In addition, Emma and Norman need the help of Ray (Kairi Jyo) because, like them, he is one of the smartest among the children. Surprisingly, he not only believes the two, but he also tells them that he had known for a while already and was actually only waiting for the right moment to escape. The plan slowly takes shape, but "Mama" always keeps an eye on the trio... 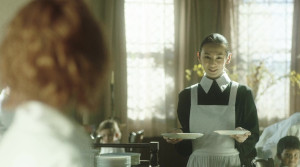 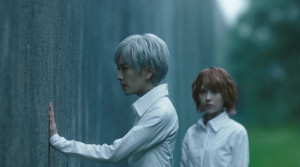 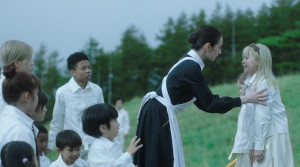 Review: Some movies manage to arouse interest just by their cinematography and color palette alone, without you knowing anything else about them. That was exactly the case for me with "The Promised Neverland", whose images immediately reminded me of a dark fairy tale by the Brothers Grimm. Nature portrayed in lush green colors, children dressed entirely in white, a pompous orphanage, and people sneaking around on the premises in the dead of night illuminated by the warm glow of a lantern. The atmosphere which the movie creates immediately manages to capture you, and my previous concern, that it might be a flick mainly intended for children or teenagers, was quickly dispelled too. In fact, the movie is based on a manga by Kaiu Shirai and pretty much follows the source material. The numerous twists and turns will therefore probably not surprise fans of the original, but newcomers will have a pretty good time. 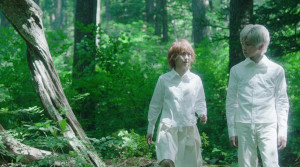 However, a small problem arises from the fact that the movie is based on a multi-part manga: Some events and developments are significantly simplified or shortened. Thus, right from the beginning, it becomes clear that something is wrong at the orphanage. Life there seems too beautiful and carefree, so there has to be a catch. While you would typically play a little with the fact that a big, dark secret lurks behind this utopia, creating some eerie moments, the viewer here just quickly gets the confirmation that something is wrong, and then the plot concentrates on forging an escape plan. But even at that we get some cuts. For example, the three friends train the other unsuspecting children to be physically fitter and more skilled during an escape by playing games with them, but all this happens in just one or two scenes. Moreover, there was surprisingly little convincing to do when they reveal to the rest of the children that they are actually only breeding cattle. 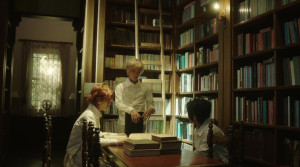 What is particularly frustrating, though, is the fact that Mama Isabella, played by Keiko Kitagawa, remains quite one-dimensional. Especially during the finale it becomes clear that she is actually a complex character in the original and not just a stereotypical villain. Cutting the source material is of course necessary, but here the wrong stuff was left out because now the drama does not have the impact it could have had. In general, you also notice that while the protagonists are all lovable, they lack a certain complexity, which is only sometimes briefly hinted at. And this, on the other hand, leads to the fact that the movie does not work that well on an emotional level. In the end, it turns out that we sometimes do not even care as much about the characters' fates as we would have expected. In addition, the episode with Sister Krone (in the original a black woman, but here played by Naomi Watanabe, which caused some displeasure among critics) turns out way too short and seems more like an intermezzo. 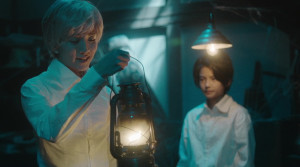 There is also no doubt that, as is typical for a manga, when some chess-like moves were used in the escape plan, they were simplified for the movie. That's also a pity, but it doesn't change the fact that the revelations are still fun and that there is always something happening. Other critics also stated that in the original the protagonists are much younger (about 11 years old) giving the fight against the adults a slightly different touch. But Minami Hamabe (who along with Keiko Kitagawa could already be seen in "I Want to Eat Your Pancreas") as well as Rihito Itagaki still manage to embody the kind of lightheartedness, naivety, and energy that you would expect from children. This is important as "The Promised Neverland" creates a link between despair and hope. You are always torn between the two, but because the movie revolves around children, what's left in the end, is a fascinatingly positive tone. 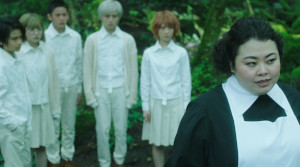 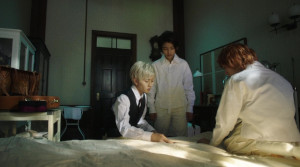 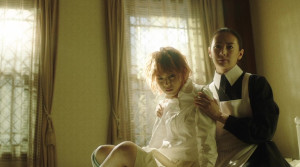 Director Yuichiro Hirakawa ("Erased") composes wonderful pictures for this fairytale-like drama-thriller, and the soundtrack is also outstanding. The demons have a grotesque look that could come right out of a picture book, and the special effects are impressive all the way through as well. The sets, especially the orphanage, are also well-chosen. "The Promised Neverland" is definitely something for the eye. Surprisingly, the movie is also not that violent, instead the scene always fades away at the last moment during important moments. But this could also represent some held back storylines for a potential sequel. Unfortunately, a lot of things still remain unclear about the world, but at least, the most important aspects are mentioned. Since the movie's source material was strongly condensed, some events seem a bit rushed, but that also means the pace is always high. In the end, this manga adaptation is one of the successful ones, and especially if you can't compare it with the original, "The Promised Neverland" is a clear recommendation.