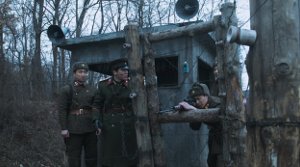 Story: Nam Cheol-woo (Ryoo Seung-bum) lives in North Korea as a simple fisherman. One day, he takes his boat to go fishing, as he always does, but this time his motor breaks down when his net gets entangled in it. Slowly, he starts to drift towards the South Korean border. Because he waves in panic at the North Korean soldiers on the shore, they don't shoot him. But when he reaches South Korea, real problems start to arise. He is captured and interrogated. His interrogator (Kim Young-min) is completely convinced that Cheol-woo is a spy. His superiors are not so sure about that, but they cannot let him return into his country just like that either. While the young agent Jin-woo (Lee Won-geun) is convinced of Cheol-woo's innocence and believes his story, Cheol-woo is still interrogated under inhumane conditions. Jin-woo is supposed to watch the fisherman and starts to take more and more pity on him because Cheol-woo just wants to return home to his wife and kid. While Cheol-woo's interrogator is bent on convicting the fisherman of being a spy, no matter what, his superiors try to think of a way to make Cheol-woo defect to South Korea. They bring him to downtown Seoul and abandon him there, so that he can get an impression of South Korea's wealth and therefore hopefully decides to live there. But the fisherman is unimpressed by capitalism and escapes his observers. Now, his interrogator has good reason to accuse him of being a spy... 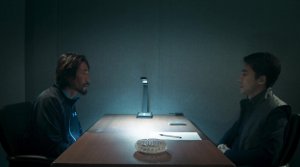 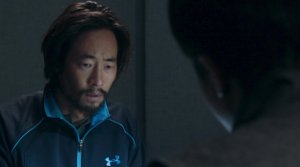 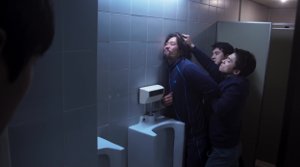 Review: For director Kim Ki-Duk water has a strong metaphorical meaning. So does fishing, you just have to think of "The Isle" or "The Bow". In "The Net", the river drives a fisherman to the South. Criticism on capitalism as in "Pieta" is inevitable. In fact, the movie turns out to be a socio-critical drama, which does not only criticize the South. Instead, North and South are portrayed like two mirror images and the ridiculously motivated pain that the fisherman has to endure and which is shown to us through a more childlike and naive perspective makes us realize that an ideology is still an ideology even if you are on the "good" side. But there is no good side for the fisherman, anyway. As soon as he floats across the boarder, he falls victim to two opposing ideas of state leadership. 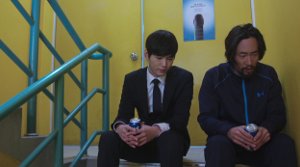 It is nice to see that Kim Ki-Duk is still good for a surprise here and there. For instance, there is a lot of talking in "The Net", which is why the characters are more accessible. This is also why the movie does not have the typical art-house-flair, which in the past director Kim always knew how to use in order to win over foreign press at film festivals. Nevertheless, his movie was part of the Venice International Film Festival this time, as well. However, now the movie addresses more of a Korean audience. There are patriotic hymns, the search for spies takes a paranoid turn, promises are made in order to lure North Koreans over to the other side etc. But all this has a rather naive aftertaste. Nativity is a key word if you want to describe "The Net". In a positive as well as in a negative way. Let's start with the more positive aspects. The fisherman sees the world in a simple way, almost through the eyes of an innocent child. Even after he has already learned that he cannot trust his torturer, he still believes all the promises made to him. 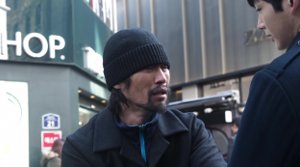 This kind of world view makes the audience see Korea's serious problems through the eyes of a child and that makes everything seem somewhat ridiculous, but also sad at the same time. The act of trying to understand the different ideologies seems bound to fail. This kind of naivety makes the events on screen have a deep impact on us. But this is just one side of the story. This naivety, which accompanies you throughout the entire movie, also makes you ask the question whether Cheol-woo is actually a well-written character. The answer is: No. He passes on a message from a spy to that man's daughter and seriously believes that it is just a poem. In addition, he never really realizes in what kind of predicament he got himself into. Towards the end, he even makes a few or at least one big mistake which makes us ask ourselves why he only tells the truth bit by bit, especially when he is in the North and could even benefit from the truth. 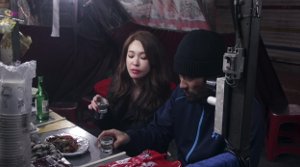 But it is not just the characters who pose a problem here. For instance, there is the fact that the superior agent does not believe that Cheol-woo is a spy, but still lets the interrogator continue torturing him and simply does not take a stand. Kim Ki-Duk is not the best scriptwriter. And this gets clear whenever he does not let the pictures speak for themselves, but the protagonists. The dialogue isn't really profound and some of the motives are used one time too many. Moreover, the director is not subtle when he presents us the different kinds of problems of both countries. There's Cheol-woo's coincidental encounter with a prostitute, for instance, which shows us that in a rich country like South Korea women have to sell their bodies to make ends meet. All well and good, but contrary to his usual narrative technique, the director makes his main character say these things out loud quite obviously. And that's what destroys the magic of a typical Kim Ki-Duk scene. 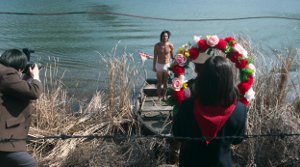 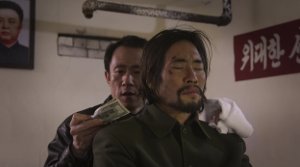 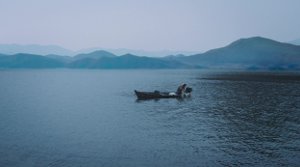 In general, the images take a backseat in this movie and this affects "The Net" badly. Admittedly, there are some pictures especially in the North, but also in a South Korean mall, which embrace some kind of movie magic, but still not as much as you are used to from the director. But maybe the problem is just that the drama gives you little room to think. Everything gets said far too clearly and the characters are too stereotypical. Nevertheless, Ryoo Seung-bum ("The Berlin File") gives his character some kind of intensity, which almost makes you forget some of the weaknesses within the elaboration of the character. To bring out the best in his cast is one of the director's strengths. In the end, the criticism might seem harsher than necessary. But this is just how it is with Kim's movies. The childlike eyes through which we see the world's horrors are the reason why we sometimes feel deeply touched by what we see, but are also the reason why at other times we can merely muster up a weary sigh. "The Net" does not simply leave you cold, but the drama does not break your heart, either. For that, the topic is just far too familiar. Due to its almost parodistic touch, you can overlook the lack of subtlety, though, and "The Net" can in parts still be called a well-done drama.