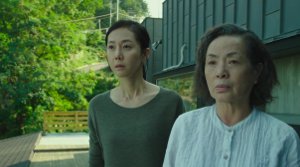 Story: Hee-yeon (Yum Jung-ah) and her husband Min-ho (Park Hyuk-kwon) move to their mother's/mother-in-law's (Heo Jin) hometown. She is mentally disturbed and now constantly hears dead people's voices in her new home. A few days ago, a murder was committed in the town and a bricked up cave was opened to hide the body. Some kids find the cave and hear strange voices coming out of it. When Min-ho checks the cave, he finds a women who dies in his arms. At the same time, Hee-yeon sees a girl (Shin Rin-ah) in the forest. Because of the dead women the police is brought in but Hee-yeon does not even try to ask them whether they would help her search for the girl. The reason being that five years ago, Hee-yeon's son disappeared and the police was not very helpful during the search. However, the girl actually shows up at Hee-yeon's place by herself. Hee-yeon takes the girl in for the night and the girl introduces herself as Joon-hee. That actually is Hee-yeon's daughter's name (Bang Yoo-seol). Even her voice sounds like that of her daughter. Shortly afterwards, a shaman talks to Hee-yeon and tells her about the mythical creature Jangsanbeom, which imitates the voice of a loved one to lure in its victims ... 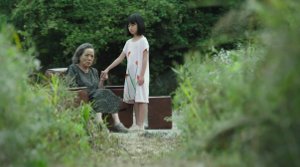 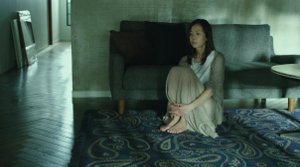 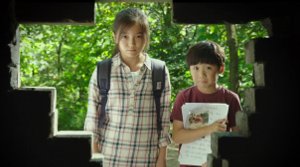 Review: During the last couple of years Korea has not exactly covered itself in glory when it comes to horror movies. The only - and even more so oppressive - exception: "The Wailing". And 'The Mimic' apparently wants to take the same line. Shamanism, an old legend of a human devouring tiger imitating a women's voice, a little guilt-ridden past to make the dramatic aspect work and there we go: a successful movie. Or so you would think. But like the thriller "Hide and Seek" this new work by director Huh Jung does not manage to convince. When it comes to atmosphere the movie speaks for itself, but apart from that, it completely collapses under its mildly entertaining plot and its half-baked characters. 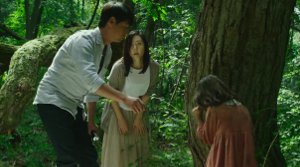 Interestingly enough, some critics actually praise the movie for its protagonists. But when you can sum up their psychological profile in only a few sentences - which I will refrain from just now, so not to give away too much of the plot - you have to admit that there is not a lot of depth to be found within the characters. Perhaps, you can at least say a few words about Hee-yeon. She grieves her son's loss, whose disappearance is brought up in a few flashbacks, but we do not get any resolution here. The fact that she wants to replace her son with the mysterious girl is as obvious as it is problematic. It is hard to sympathize with a woman who takes a child into her home without even informing the police. Even if her husband points out that the girl's real parents must already be searching for her desperately, he does not really exert any kind of pressure. 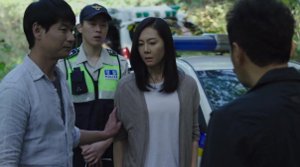 However, this is not the only weird decision making process in this movie. The mentally disturbed grandmother actually attacks the girl with a knife and later on the family discusses whether this is reason enough to put her into a retirement home. They do not even call the police. Even in the finale, Hee-yeon makes a decision, which is completely inexplicable and even amounts to betrayal, only to then decide in a way that plays into the hands of a typical horror movie ending. The actress Yum Jung-ah ("Cart") deserves better than such a flat character. Even if she does have some emotional moments, which are also pretty believable, it does not change the fact that there is no character development. Usually, the main characters in horror movies are always a little remote because a horrible secret from their past surfaces at the end. But even here, the movie does not have anything to offer. Better you know before you get your hopes up. 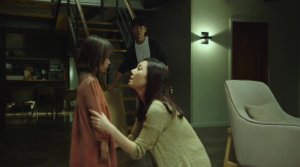 At least when it comes to the little girl you would have expected a more interesting twist. But no such thing. After all, she stays mysterious for quite some time and the young actress Shin Rin-ah ("Memoir of a Murderer") delivers a great performance by seeming both innocent and creepy at the same time. The police's role is insignificant. There are a few investigation scenes, which are supposed to convey the impression that some more information is being revealed, but the plot is just too shallow. Especially, because the main character gets all important background information from a shaman, anyway. Even though, Hee-yeon was not even looking for answers. Sloppy work from the scriptwriter's side. Nevertheless, "The Mimic" scores with its atmosphere. The shaman aspect is reminiscent of Japanese Shinto-rituals and as soon as you see the never-ending staircase leading into a cave, you have to admit that the director knows how to creep the audience out by not just using cheap jump-scares. 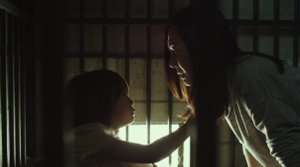 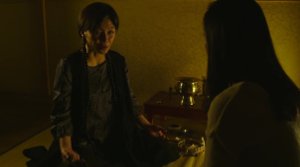 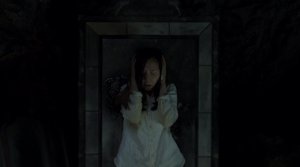 But as soon as we are in the dark cave, it quickly gets boring again. Despite all the make-up and the matching sound effects, the evil presented here leaves you cold. When you find out that you fight it by smashing its reflection in a mirror (presumably, because its essence is trapped in it?), you realize that there will not be any scary climactic scene here. In the end, director Huh Jung also fails in an area of expertise where we thought he could have had some strength. What good is left to be said about "The Mimic"? Not much. It is a horror movie based on a legend that is supposed to scare kids, but the screen adaptation only seems unspectacular and boring. Plot and characters should have been fleshed out more. In the end, it is a movie, which may only interest hardcore horror fans.