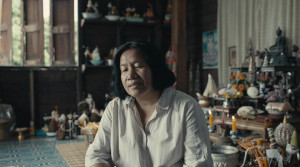 Story: A team of documentary filmmakers accompanies the shaman Nim (Sawanee Utoomma) as she helps the people in her village when they are haunted by evil spirits. The documentary is aimed at shedding light on the way the role of shaman is passed on in Nim's family, as the goddess Ba Yan has chosen the female members of the family as a medium for generations. One day, Nim has to attend her brother-in-law's funeral. Nim has been out of touch with her sister Noi (Sirani Yankittikan) for a long time, as she was actually chosen for the role of shaman but passed on the task to Nim. Noi has turned to Christianity and is therefore far from pleased when Nim tells her that her daughter Mink (Narilya Gulmongkolpech) could be haunted by a ghost. In fact, the film team also notices that Mink behaves very strangely. Sometimes, she behaves like a child, other times she drinks excessively. When Nim then also finds something in her niece's closet that hints at Mink probably having nightmares, it is clear to the shaman that something is wrong. Mink is getting worse and worse over the next few days and weeks and Noi already suspects that the goddess Ba Yan has now chosen her daughter as a medium. However, she is not willing to accept this. Over time, though, it becomes clear that circumstances are a little different... 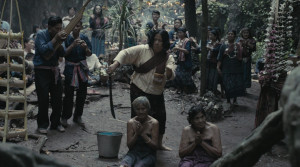 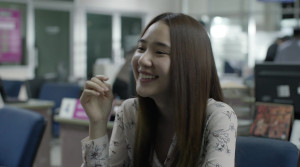 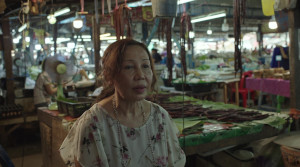 Review: It's been a while since I've watched a Thai horror movie. A good fifteen years ago, they had a lot to offer - "Shutter" immediately comes to mind, for example. Since "The Medium" was directed by the same director, you would think that this speaks for the same level of quality. But this movie is also a mockumentary. Therefore, it makes fun of documentaries while also trying to sell a horror flick. I usually have a bit of a problem with that, as it often does not work out. Still, the story was co-written by Korean director Na Hong-jin and he also co-produced this movie. His "The Wailing" is one of the best Korean horror flicks of the last decade. And as it did in that very movie, shamanism plays the lead in "The Medium" too. What this might look like in Thailand could be a novelty for most people, and that is also what aroused my interest. 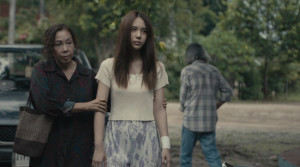 With regard to the quality of "The Medium", however, I've got mixed feelings. The movie's beginning is a bit long-winded, mainly consists of interviews, and sometimes we also follow one of the characters through his/her daily routine. Here, the director clearly tries to make us feel as if we were watching a documentary. Moreover, we constantly get text panels which the fictitious documentary team uses to explain things to us or to put their next steps into context. After the characters have been introduced and you realize that the movie does not just focus on the shaman Nim alone, as instead Mink becomes the center of attention at a certain point, the movie's atmosphere gets denser and scarier. Going onwards, the events are also much bloodier than you would expect at the beginning. Basically, the horror aspect only plays the lead during the last third of the movie, and then the events are sometimes even reminiscent of classics like "The Exorcist". 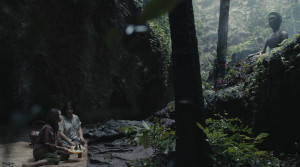 Unlike other productions set in Thailand, the director did not put a yellow filter over the images here. The nature we get to see is not depicted in exaggerated lush colors either. He wants to keep up the illusion of a documentary film being produced with a small budget, and this works pretty well. Nevertheless, this does not diminish the beauty of some landscape shots, in which the connection of shamanism and nature spirits is conveyed quite nicely. In shamanism everything has a spirit, and so nature itself exudes more life than is normally the case in other movies. Yet, the style of "The Medium" is responsible for one of my biggest problems with indie productions: the shaky camera work. This could cause some headaches for viewers who have a problem with that too, especially because the movie also plays with focus/sharpness. This affects the otherwise well-done directing job in a negative way. 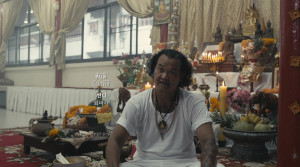 Director Banjong Pisanthanakun always manages to build up slightly unpleasant situations in order to then create the feeling of a countdown towards the end, as we count down the days until the exorcism happens. Eventually, the kettle is seething more and more until the lid gets blown off - and the finale turns into a nightmare. A few cultural peculiarities might pull the viewer out of the events from time to time, but generally the director does a good job at making shamanism accessible to a Western audience. Those viewers will also be able to quickly adapt to the "found-footage" style towards the end. As already mentioned before, the movie can also turn quite gruesome. This doesn't relate so much to the somewhat obviously violent scenes, but more to the strange moments of the girl being possessed by a ghost. Probably the worst scene features a dog in a cooking pot. Therefore, the movie is certainly not for the faint of heart. 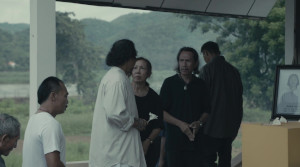 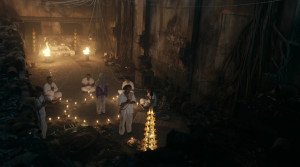 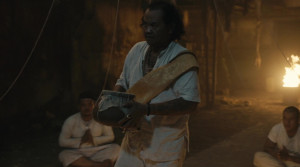 With its run-down ruins of an old building and the dim lighting, the finale gives the scenery an animalistic, Stone Age-like atmosphere, which toys with our primal fears. All this is realized quite nicely. Special praise goes to actress Narilya Gulmongkolpech, who initially only comes across as a pretty face, so that Mink seems to be a poorly fleshed-out teenage character. But Gulmongkolpech's transformation is impressive, and watching her performance you are almost afraid that she might have come a little too close to madness during the movie shoot. Be that as it may, at the end of the day "The Medium" stays true to its genre and does not really surprise us. As a slightly different horror flick, however, I can definitely recommend it. Personally, the shaky camera style and the slow introduction bothered me. In addition, the mockumentary genre doesn't really do much for me. Accordingly, this review is probably a bit more negative than others might be - but fans of the genre are more than welcome to add an extra point.