Story: Martial arts master Gong Yutian (Wang Qingxiang) from the north wants to retire and have his last fight against a master from the south. Soon everyone agrees that only Ip Man (Tony Leung Chiu-Wai) comes into consideration. However, Ip isn't interested, the more so since there is quite a number of masters above him who should be given this honor. Eventually he competes nonetheless and wins against the master thanks to his inner strength and wisdom. The daughter of the master, Gong Er (Zhang Ziyi), isn't happy with the defeat at all, though, and challanges Ip Man. Certain conditions lead to her victory, but during the fight a mutual interest develops between the two opponents. The years following Ip Man sees his belongings gone because of the invading Japanese while Gong Er swears an oath to take revenge on Ma San (Zhang Jin), the former master student of her father, who has betrayed her family. This oath implies that she is never allowed to marry or pass down her martial art. Yet, even years later Ip Man is still yearning for seeing her martial arts technique one more time. Or at least see Gong Er herself...

Review: Even long before every other movie from China/Hong Kong centered around the martial arts legend Ip Man director Wong Kar-Wai announced his plans to shoot a bio picture about the man who made Wing Chun famous. It took ten years for the movie to hit screens and thus "The Grandmaster" is somewhat of a little disappointment. At a closer look there are only few reasons for that, though, it's more that expectations have been scaled up to the astronomical. Wong Kar-Wai delivers an extraordinary martial arts film, which nevertheless stays true to the unhurried pacing of the director and weaves some profound motives into the story. Accordingly, Wong should be able to win over martial arts enthusiasts as well as art house fans. 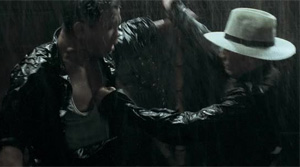 Audiences who are familiar with Wong's former movies like "Chungking Express" or "Days of Being Wild" will soon recognize old themes, which Wong can't get away from. Mostly it's those short encounters that even years later his characters aren't able to forget and opportunities that haven't been used. A certain kind of melancholy or even depression, since the individuals regret their actions or not acting, runs through the whole movie. In its core "The Grandmaster" is actually a love story, although it is merely implied to such a degree that you can't take it serious at all times. Sadly, the chemistry between Zhang Ziyi and Tony Leung isn't right either. However, for most part this is the fault of the screenplay since the charactes aren't fleshed out especially well. 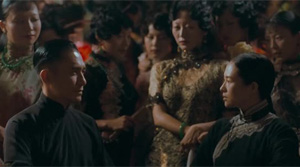 In order to substantiate this argument it has to be noted that it isn't enough to let the protagonists stare into space contemplatively in order to give them more color. It also needs to be said that such scenes are especially lengthy in "The Grandmaster" and don't always serve a purpose. Furthermore, the story is oftentimes told in a very convoluted way. Flashbacks, sudden cuts, new characters getting introduced, which could prove to be important or not, all of this is supposed to make "The Grandmaster" look more complex than it is. Even in the longest cut at about 130 minutes, which is the Chinese one, the character Razor, which in one scene reunites Zhang Ziyi and Chang Chen on screen after their "Crouching Tiger, Hidden Dragon", seems pretty useless, as is the case with Song Hye-Kyo as Ip Man's wife by the way. At least we get to see Chang in one fight scene in which he proves that he is extremely good in Bajiquan, which he learned for the movie (he even won a national price with it at a contest!).

The overuse of different characters, of which some just remain distant acquaintances, also turns out to be problematic. A welcome change, though, is that the story without any effort occasionally skips decades. We actually get a look at the political events in the country, like the invasion of Japan, and this in fact has an impact on people's lives, yet those events relatively remain in the background. Aside from the love story which isn't fully working out it's also strange that Ip Man doesn't seem to age, while Zhang Ziyi ("The Banquet") succeeds in making her character look like a tired old woman being marked by life just by her acting alone. Apart from that there are some words of wisdom that can be transfered from martial arts to life itself and which at times also need some interpretation work at first. Therefore, the ending may turn out to be a bit frustrating for some viewers, too. 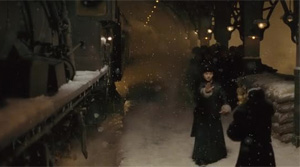 The fights in "The Grandmaster" are a feast for the eyes, there is no doubt about that. But that's also where a big point of criticism is to be found. The fights are supposed to look like art and that's way too obvious. Battles in the rain, in the snow, three quarters of them being shot in slow-motion, this is simply like going down the easy road. Originality looks different. Can you really impress someone with this, nowadays? Yes, if you have choreographer Yuen Woo-Ping backing you up, who just knows how to give the director's camera work and his sense for aesthetics the necessary groundwork. By the way, the highlight isn't a fight featuring Ip Man - Tony Leung is delivering "just" a good performance, the expert eye will still see that he isn't a martial artist -, but the one between Zhang Ziyi and Zhang Jin at a railroad station, including a lot of steam, a constantly blinding light and snow.
Eventually, "Ashes of Time" still remains Wong Kar-Wai's best martial arts movie, even though "The Grandmaster" delivers considerably more martial art. Despite all being said the technical realization is supremely well done and at the end you get the feeling that Wong has matured thanks to his experience and after all did somewhat distance himself from what we are used to see from him. In a good as well as in a bad way. Anyway, to use the words of Gong Er's father, this means that he didn't choose standing still but moving forward.